Please ensure Javascript is enabled for purposes of website accessibility
Log In Help Join The Motley Fool
Free Article Join Over 1 Million Premium Members And Get More In-Depth Stock Guidance and Research
By Jason Hall - Oct 21, 2018 at 7:16AM

Infrastructure is a massive global industry, and NV5 Global is trying to carve out a growing piece with each passing year.

The world's population is rising quickly, particularly the urban middle class in Asia, Africa, and South America. At the same time, infrastructure in many developed nations is in dire need of both modernization and revitalization. According to the Global Infrastructure Hub, an initiative created by the G20, global infrastructure spending needs to reach $88 trillion from 2018 to 2040 to meet the needs of a growing -- and more modern -- world.

And one small company, NV5 Global Inc. (NVEE 0.86%), is making headway to become a much bigger player in global infrastructure. Since it went public in 2013, its sales have grown an incredible 478%, helping send its stock price up nearly tenfold. 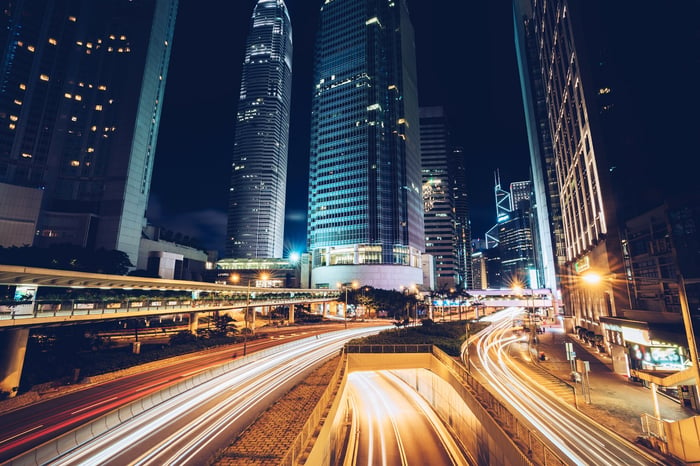 Yet even with these impressive returns, NV5 remains a small company. Its total revenues over the past 12 months are only $384 million, and its market capitalization is just shy of $1 billion. In infrastructure terms, this is a small fish in a vast ocean, and management has used that small size as a big growth advantage. Furthermore, I expect that advantage should continue to pay off for investors for many years to come.

Infrastructure isn't a fast-growth industry, but it is absolutely immense, has many different parts, and can be incredibly lucrative for companies that prove very good at their specific disciplines. For NV5, that's engineering and consulting for five different markets, which it categorizes as construction quality assurance, infrastructure, energy, program management, and environmental.

NV5 has around 2,000 employees working from one of 100 global locations. The majority of its employees are highly skilled professionals, including engineers, architects, project managers, surveyors, and construction professionals. While it has some notable scale, it's much smaller than industry giants like Jacobs Engineering (J 1.88%), with more than 400 offices and nearly 80,000 employees, or McDermott International (MDR), which has more than 40,000 employees in 54 countries. 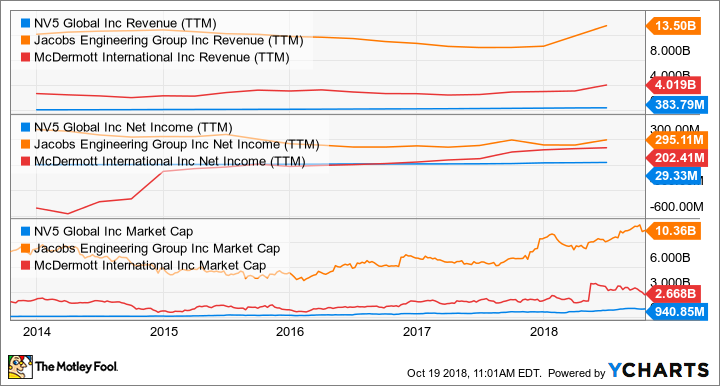 What makes NV5 an appealing investment

While Jacobs and McDermott are far bigger companies, NV5 is big enough that its scale helps it win more complex and bigger projects than smaller engineering firms, but it's still small enough to drive substantial growth by acquiring many of those smaller firms.

According to industry data, there are more than 144,000 engineering firms in the U.S. alone, with the vast majority of those being small firms with a single office or only a few locations. And since going public, NV5 has acquired more than 30 of these smaller firms, quickly integrating them into its operations and systems in order to improve the returns they could generate as stand-alone entities.

And under the leadership of founder, CEO, and chairman Dickerson Wright, the company has done an excellent job delivering strong per-share earnings growth from both acquisitions and organic sales. Last quarter, revenue increased 28%, with a solid 10% of that from organic sales, roughly in line with what the company has produced in prior quarters. But where the rubber really meets the road is how well the company has turned those incremental revenues into earnings. Last quarter, earnings per share increased 72% after having jumped an incredible 86% in the first quarter. 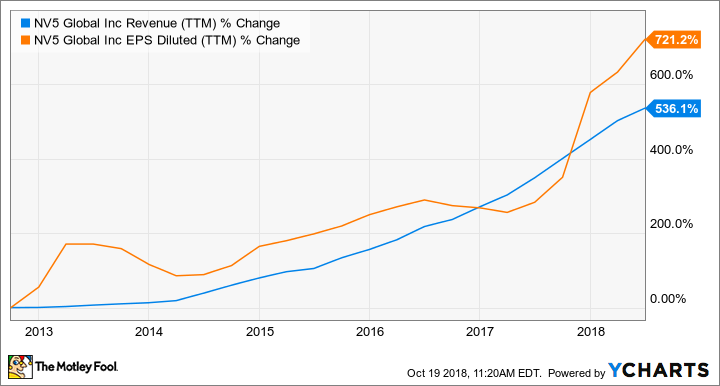 Much of the company's success is tied to Wright, along with his executive team, much of which has worked with him for more than a decade, including before founding NV5. Wright has proven a talented executive in the engineering space. His skill at capital allocation, along with the rigorous way the company integrates acquisitions to wring out unnecessary expense and leverage the enterprise's scale, has delivered huge returns so far.

Furthermore, management is heavily incented to do well by shareholders. Wright alone owns about 25% of the company, with other management owning another 10%.

Should you buy NV5?

Trading for nearly 37 times company guidance for 2018 earnings per share, NV5 isn't cheap. But it's also growing earnings at an enormous rate, and that rarely comes at a low price. At the same time, with its tiny market capitalization, it has also proven to be very volatile -- about 70% more volatile than the S&P 500 over the past three years. So if that kind of up-and-down movement -- often for little discernible reason -- will keep you up at night, it might not be a good fit for you.

There's also the risk that its highly acquisitive growth strategy could falter. Growth by acquisition is very difficult to consistently do well, and at some point, even companies that prove adept make a flub. Eventually that could happen here, eroding the per-share earnings growth at best or, at worst, costing the company money.

But I think the risk–reward profile makes NV5 too good to pass up. It's not every day you get to invest this early, along with a proven founder, in a company with so much opportunity for years of growth.