There's no escaping the growing artificial intelligence market that technology companies are creating. Whether one is looking at the AI chips built by Alphabet's (NASDAQ:GOOG) (NASDAQ:GOOGL) Google, the driverless car platform created by NVIDIA that uses AI to help vehicles "see" and react to what's happening around them, or Amazon's (NASDAQ:AMZN) Alexa smart assistant that fields questions from users (and drives more sales to the company's e-commerce site) -- AI is taking over the tech world.

But the implementation of AI has massive implications beyond the tech world. In particular, it will likely transform the job market in ways that seem impossible to us right now.

Here are three of the biggest changes that are likely on the horizon. 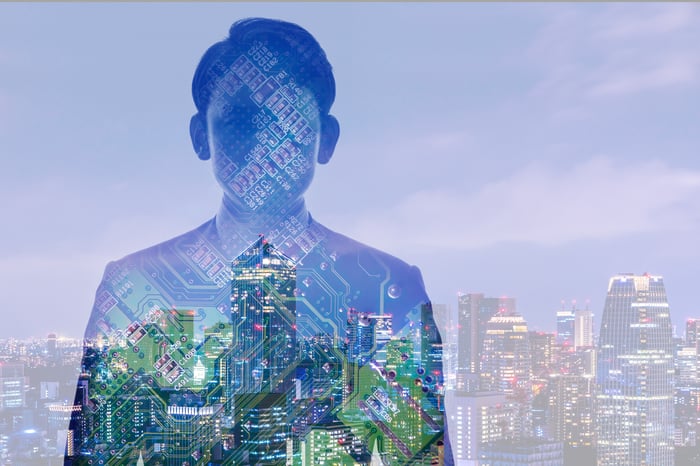 1. AI will augment many jobs

If you have trouble imagining how AI might assist you at work without taking over your job, consider something like Google Smart Compose. The GMail feature offers word and phrase suggestions to users as they compose their emails, which allows them to do so more quickly, and with fewer grammatical mistakes. It's a simple AI augmentation tool that's already widely used.

Indeed, AI is already helping people perform complicated tasks and, in some cases, do them better than ever before. A group of Harvard pathologists found that when they used AI to help them diagnose breast cancer in patients, their accuracy rate increased from 96% to 99.5%.

That's impressive, and it's just the beginning. Analysts at research and advisory firm Gartner estimate that by 2022 "one in five workers engaged in mostly nonroutine tasks will rely on AI to do a job." In other words, just a few years from now, AI tools could be compiling and composing pesky weekly status reports freeing up workers for more important -- and less automatable -- tasks.

"Unfortunately, most calamitous warnings of job losses confuse AI with automation," Svetlana Sicular, a research vice president at Gartner, said last year. "That overshadows the greatest AI benefit -- AI augmentation -- a combination of human and artificial intelligence, where both complement each other."

Gartner estimates that by 2021, AI augmentation will generate $2.9 trillion in business value annually.

2. AI will eliminate jobs -- but create even more new ones

Much of the discussion surrounding AI revolves around the degree to which AI tools will be able to replace workers. The nature of those speculations have led many people to assume that AI systems will eventually -- and possibly even quickly -- put most of us out of work. Doctors, writers, artists, soldiers, and many others could find their jobs on the chopping block.

This has lead to a second stage of the debate: How should we re-create the idea of human work if AI is going to take over so much of it, and how can we adapt the economy to those new realities? Among the proposals gaining renewed interest is "universal basic income" -- a reasonable policy option for an era when there aren't enough jobs to go around.

However, some research indicates that while AI will eliminate many jobs, it could create even more.

Not all of the predictions for AI are so upbeat, of course. One concern experts have is that as AI begins to automate more jobs out of existence, there will be gaps between when some workers lose their jobs, and the point at which they're trained for the new jobs being created.

McKinsey Global Institute economists Susan Lund and Michael Chui said in a podcast earlier this year that AI and robotic automation will require 75 million to 375 million people worldwide to change their occupations or learn new skills by 2030.More specifically, they predicted that middle-income workers would suffer.

If those workers don't get retrained fast enough, there will be more people competing for fewer low-skill jobs, which could drive wages down, the economists noted. They remained optimistic that countries would be able to manage the transition, but acknowledged that to do it properly would take a significant amount of planning.

Consider one example of how AI automation and robotics are already impacting the job market: Amazon now uses more than 100,000 robots in its warehouses worldwide. The company has been criticized for its extensive reliance on automation, as well as the relatively low wages it paid its warehouse workers. But, this month it increased its base wage to $15 per hour for more than 250,000 of its employees, and there's evidence that automation has been good for at least some of its workers.

The New York Times reported last year that some workers who had previously performed physically demanding and less mentally stimulating jobs in Amazon warehouses have been trained to oversee robots and troubleshoot problems. Instead of being pushed out of work by AI, those individual landed new jobs -- in many cases, less labor intensive ones that they liked better and found more rewarding.

There's no slowing down the spread of AI. Tech companies are heavily investing in it, and a PwC report estimates that artificial intelligence could add $15.7 trillion to the global economy by 2030 -- and boost North America's GDP by 14% that year.

Investors looking to benefit from the growth of AI have their choice of technology companies to buy stock in. Alphabet is knee-deep in AI with its own chips, its self-driving car company, the Google Assistant, and a laundry list of services that use AI, including Search, Mail, and Translate.

At Amazon, CEO Jeff Bezos has said that machine learning, a subcategory of AI, is a driving force behind nearly everything the company does -- from its e-commerce site and Amazon Web Services to how it recommends products and handles logistics.

With artificial intelligence on the verge of transforming the job market and the economy, it's time for all investors to start paying close attention to massive changes this technology will bring.