The smart-speaker market is taking off, and these two companies have a lot to gain from it.

Smart speakers used to be niche devices that only a handful of consumers had in their homes, but the latest Nielsen data shows that 24% of American households owned a smart speaker in the second quarter. That's an important figure on its own, but it's even more impressive when you consider that 62% of smart-speaker owners first began using the device in the past six months.

Why does this matter? Because Google and Amazon have considerable opportunities to grow their bottom lines as more users adopt these devices. 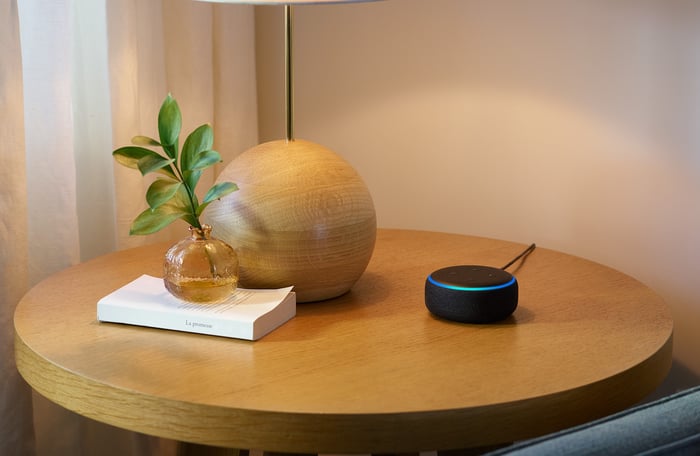 How Amazon and Google benefit from smart-speaker growth

Google entered the smart-speaker market with its Google Home devices years after Amazon debuted its Echo speakers, but the company has taken the lead over the past two quarters and now sells more speakers than Amazon. Google shipped 5.4 million devices in the second quarter, outpacing Amazon's 4.1 million shipments.

But Google's primary opportunity isn't in selling the devices themselves. In fact, the company may be breaking even or even losing money on the devices. The real opportunity for Google comes from the fact that the company can collect more information about its users through these devices -- and then use that data to help with its ad sales.

Advertising on Google's platforms makes up about 86% of Alphabet's total revenue, and the way Google has grown its ad business is by collecting as much data on its users as possible (from search information and its other services) and then selling ads based on that data. That means that any device that helps Google collect more data will ultimately benefit the company's advertising business.

Amazon, while a growing advertising platform in its own right, is benefiting from its smart speakers in an entirely different way. For the e-commerce giant, its Echo speakers make it easier for its customers to order products from its site.

While Amazon has lost some smart-speaker ground to Google this year, the company is still in a fantastic position to benefit from this market's growth. RBC Capital estimates that Amazon could add $10 billion to its bottom line by 2020 from product sales on Echo speakers.

Both Amazon and Google can survive without smart speakers, and neither one is at risk of becoming dependent on unit sales from these devices. The real opportunity for the companies is how Google can use its devices to sell more ads and how Amazon can use them to sell more products.

Investors, therefore, should view smart speakers as vehicles that can drive more sales for both companies, rather than focus on how much the companies earn from selling the devices themselves.

Adobe estimates that at the end of this year, smart-speaker ownership in the U.S. could reach 48%. This market is clearly growing quickly, and Amazon and Google are just beginning to benefit. As the companies continue to sell more speakers -- and add their smart assistants to more third-party devices -- investors can expect even more sales growth as a result.