Going into Shopify's (NYSE:SHOP) third-quarter financial report, investors were keeping a close eye on the results to see if the company's revenue growth would continue to slow. Shareholders knew Shopify couldn't keep up the breakneck pace it had maintained for much of its public life. But the recent pace of deceleration has weighed on investors, who feared the stock had gotten ahead of itself.

Even as Shopify continues to invest heavily in growth, the company was able to surprise Wall Street on Thursday with advances in both the top and bottom lines that were much better than expected. Shares rose roughly 12% in the trading session following the Oct. 25 earnings report release. 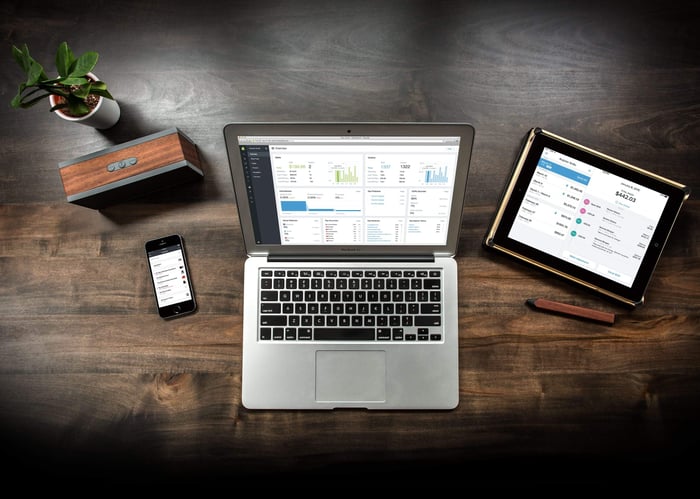 For the third quarter, Shopify reported revenue of $270.1 million, an increase of 58% year over year, exceeding analysts' consensus estimates and the high end of the company's guidance, both of which were pegged at $257 million. Adjusted net income of $4.5 million resulted in adjusted earnings per share of $0.04, a penny lower than the prior-year quarter, but much better than the $0.02 loss expected by analysts.

Shopify saw strong growth in both business segments. Subscription solutions revenue of $120.5 million grew 46% year over year, driven by increases in the company's monthly recurring revenue (MRR). Merchant solutions jumped an even more impressive 68% compared with the year-ago quarter, to $149.5 million, on higher gross merchandise volume (GMV) and strong results from Shopify Capital and Shopify Shipping -- both of which doubled year over year.

Recurring revenue continues to improve for Shopify, helping to provide a steady stream of income that is the lifeblood of any subscription-based business. MMR climbed to $37.9 million, up 41% year over year, as new merchants continue to flock to the software-as-a-service provider. Shopify Plus, the company's enterprise-level solution, contributed $9.2 million, or 24% of MRR -- up from 20% in the prior-year quarter. Recurring revenue helps even out some of the peaks and valleys associated with revenue growth, and it now accounts for 14% of Shopify's sales. 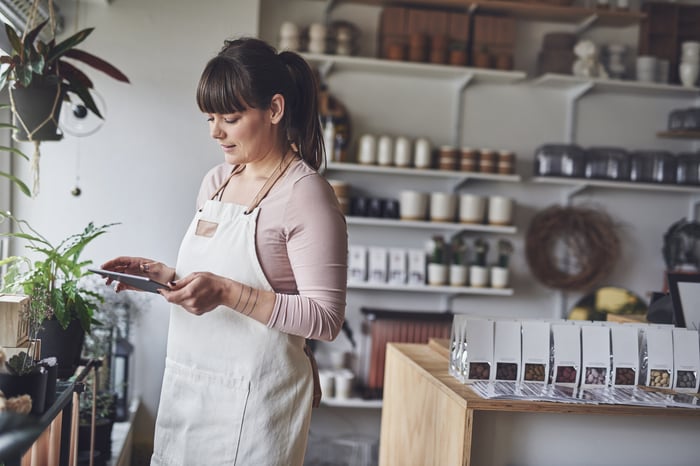 GMV, which aggregates the total sales by all sellers on Shopify, grew to $10 billion, up 55% compared with the prior-year quarter, and demonstrates that sellers continue to achieve success using the company's platform. Gross payments volume (GPV), the amount of payments Shopify processed, increased to $4.1 billion and represented 41% of GMV, up from 37% during the same period last year.

Operating expenses of $181 million grew 61% year over year, outpacing revenue, as Shopify continues to spend heavily to feed its global expansion. The company still makes most of its money and conducts the majority of its business in North America. To diversify, Shopify is expanding its efforts to localize its platform in a growing number of international markets, adapting for language, payment methods, and currency.

Shopify launched several innovations during the quarter aimed at providing sellers with more tools to succeed. The company introduced multi-location inventory tracking, and Shopify AR, making augmented reality tools accessible to smaller merchants. The organization also opened a brick-and-mortar store in Los Angeles to demonstrate its technology, products, and services, as well as to provide a hub for merchants to find solutions and support.

CFO Amy Shapero said: "Solid execution and continued rapid growth drove our strong results in the third quarter. We relentlessly shipped new products and features to prepare our merchants for their biggest selling season of the year, merchants' GMV expansion was well ahead of e-commerce growth overall, and our merchant base continues to expand at a healthy clip."

Based on the company's continued execution, Shopify raised its full-year outlook for 2018:

For the fourth quarter, Shopify expects revenue in a range of $315 million to $325 million, which would represent year-over-year growth of 43% at the midpoint. The company is anticipating an operating loss of about $16 million, and adjusted operating income of about $17 million (both numbers using the midpoints of management's guidance).

Analysts' consensus estimates are calling for revenue of $315.36 million, an increase of just over 41% year over year, and adjusted earnings per share of $0.18, representing growth of 20% compared with the prior-year quarter.

Shares may continue to be volatile as the result of Shopify's market cap of about $14 billion and its pricey valuation of 14 times forward sales. Still, the company continues to stick to its game plan of focusing on its international expansion while rolling out new tools and services to make running a digital enterprise easier for merchants. This rapid pursuit of growth should continue to benefit Shopify -- and its shareholders.