Facebook, Google, and Amazon are all pressing hard to dominate the smart home, and the battle is just beginning.

Smart speakers are becoming increasingly valued for their ability to connect other smart home devices, and some companies have recently made big moves into this space -- among them, Facebook (FB 1.18%), which just debuted the Portal, a smart device that features a cutting-edge video call system as well as the usual smart speaker functionality.

So why are Google, Amazon, and Facebook focusing their attention on connected home devices -- and why should investors be paying attention? Because the smart home market, which includes everything from Wi-Fi enabled light bulbs to wireless cameras and door locks, will be worth $138 billion by 2026. And each company has unique opportunities to benefit. 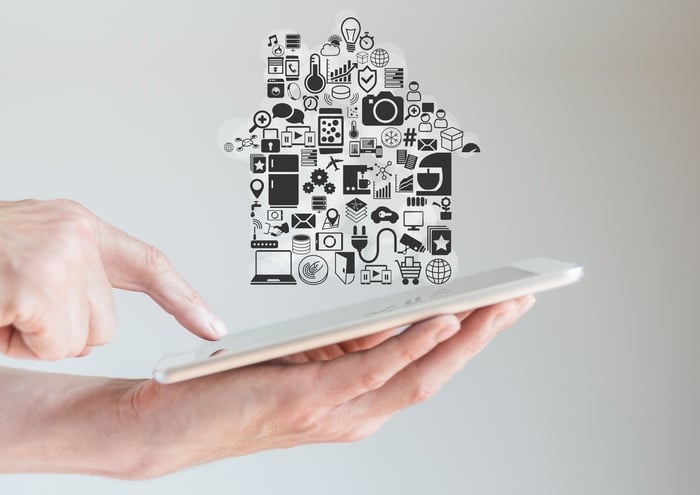 The Google Home and Google Max smart speakers out-shipped Amazon's Echo devices in the most recent quarter. That's notable because it means that Alphabet will know more about what its users are searching for, what music they're playing, what directions they're looking up, etc. -- all of which can be valuable data for its advertising business. And ad sales still account for about 86% of Alphabet's total revenue.

Alphabet's other major push into the smart home market involves Nest, which it acquired for $3.2 billion back in 2014. It continues to pour resources into the unit, which Alphabet recently shifted out of its Other Bets segment and placed under Google's umbrella. Google spent nearly $500 million on Nest last year alone, according to reporting from The Verge.

Nest made $726 million in sales in 2017, a drop in the bucket compared to Alphabet's total revenue of $110.9 billion. But the company is playing the long game here. Its aggressive moves with Google Home and its willingness absorb years of losses to develop Nest show that it understands how important it is to catch up with Amazon in this space. Investors should keep a sharp eye on Google's smart speaker sales and whether they continue to outpace Amazon's Echo shipments.

For rival Amazon, the opportunity is a little more straightforward. The e-commerce giant sells many of its tech devices at a loss or just above cost because they give it additional channels though which it can sell products and services to users. And it works. Amazon Prime members who own Echo smart speakers spend about $400 more per year on than Prime members without them.

While Google's smart speakers outsold Amazon's devices in the most recent quarter, Amazon still holds the larger market share -- 70% compared to Google's 24%. Amazon is likely hoping that it's recently released batch of smart home devices will help it maintain that lead. Among them, the AmazonBasics microwave, which can pair with an Echo device so it can be controlled by voice commands, seems to have generated the most buzz.

Amazon also expanded its footprint in the connected home market when it purchased Ring, which makes smart doorbells, this spring. Between the purchase of Ring and the debut of new devices like the connected microwave, Amazon is taking precise aim at Google's Nest line of products.

But the real opportunity for Amazon's Alexa assistant remains its ability to increase sales from its website. RBC Capital analysts estimate that purchases mediated by Echo devices could land in the $10 billion to $11 billion range by 2020. 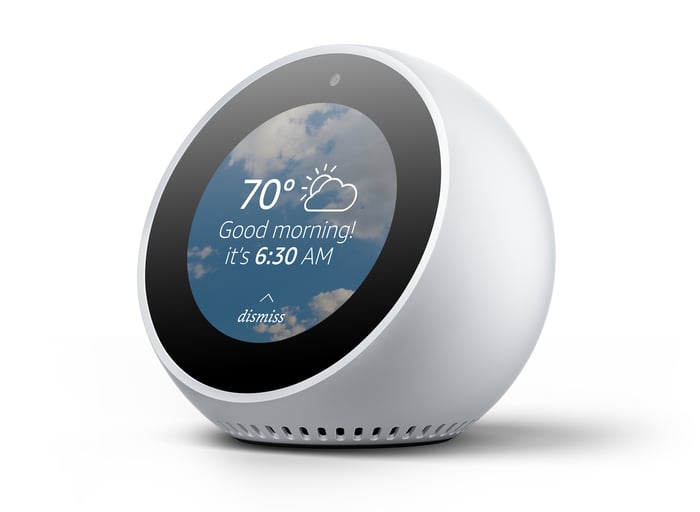 Facebook is the newcomer to the smart home market, but its Portal video calling device is already making waves -- though not in a good way. Portal is designed to allow users to easily send and receive video calls. There are two versions, one with a 15.6-inch display and another with a 10.1-inch display -- but putting a camera on an always-on smart device has raised privacy concerns -- issues made all the more acute due to Facebook's repeated information security failures.

Facebook says it designed Portal with privacy in mind and that it won't use phone conversations to collect data beyond what it would already gather from its Messenger app. However, Facebook makes most of its money from advertising, which has left many watchers concerned that Portal calls could be used in this manner at some point.

Portal voice calling is built in the Messenger infrastructure, so when you make a video call on Portal, we collect the same types of information (i.e., usage data such as length of calls, the frequency of calls) that we collect on other Messenger-enabled devices. We may use this information to inform the ads we show you across our platforms. Other general usage data, such as aggregate use of apps, etc., may also feed into the information we use to serve ads.

Privacy concerns aside, Facebook's goal with Portal is to enter the smart home market in a way that allows it to collect information that could be useful to its advertising business. Digital ad spending in the U.S. is expected to reach $111.4 billion in the U.S. this year, and Facebook already controls about 20.6% of the market. But if it overcomes the initial apprehension that followed its unveiling, Portal could eventually give it leverage to gain even more. 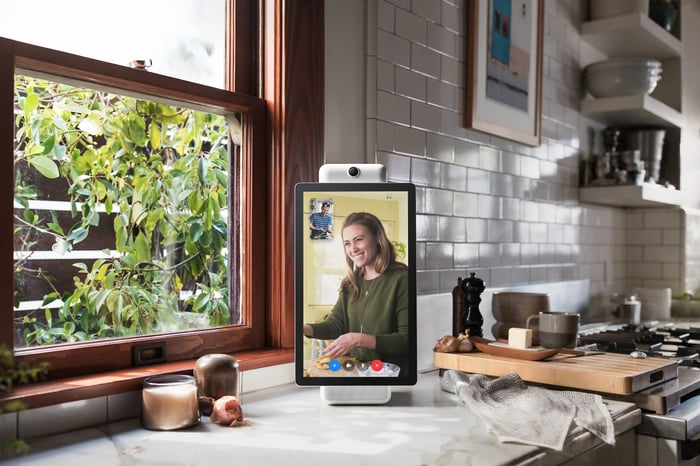 Keep an eye on this space

These tech giants' next big market focus is the home, and we're still in the early stages of this gold rush. Right now, Amazon still has a slight advantage because it was an early mover with its Echo devices, and its smart speakers remain an easy and natural way for consumers to buy products from its website.

Google is gaining ground with its Home and its Nest devices, but Facebook's Portal could hit a roadblock, given that users may have had their fill of Facebook-related privacy fiascos.

This market will be worth $138 billion by 2026, but the bigger opportunity for each of these companies is to lock users into their ecosystems, and then sell more ads or, in Amazon's case, more products.

It's clear that all three companies are looking to connected home devices to help them increase their interactions with users -- and if they do that successfully, it'll lead to more sales across their businesses.