Unlimited data plans have been on the rise over the past few years, in part because Americans' ever growing use of cellular data, but also because wireless carriers have been in a constant battle to lure away their rivals' customers, and one of the most effective ways to do that has been to offer deals on unlimited plans.

The freedom that has given to U.S. wireless customers with those plans has led them to consume about 6.1 GB of cellular data each month, according to the latest Strategy Analytics data.By contrast, those on data allotment plans (any data plan that is not unlimited) averaged about 1.6 GB. Of course, Americans use far more data overall, when factoring in Wi-Fi -- that adds about 13.4 GB per month for the data allotment group and 14.2 GB for unlimited data plan customers. 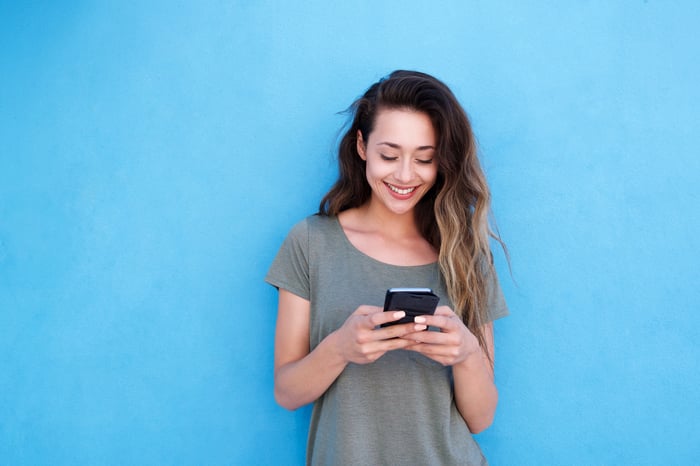 Usage varies by carrier as well. Verizon Communications (NYSE:VZ) and AT&T (NYSE:T) customers, on average, consume nearly the same amount -- 3.98 GB and 4.06 GB per month, respectively. Sprint (NYSE:S) and T-Mobile (NASDAQ:TMUS) customers average a bit higher -- 5.37 GB per month for Sprint users, and 5.78 GB for those on T-Mobile's network.

So why does all of this matter for wireless carriers and their investors? Because the telecom giants have nearly tapped out their ability to win over customers via unlimited plans. Such offers have become so prevalent that they no longer offer much opportunity for the providers to differentiate themselves. So now, the carriers are pivoting to new ways to attract new customers, and gain additional revenue from existing ones.

The other problem for these carriers is that, having aggressively competed to offer attractive unlimited data plans, they now have to provide networks that can handle the load -- an expensive proposition. Not only do customers who have no reason to moderate their data use cause more congestion on their networks, but once a person signs up for an unlimited plan, they're in the top tier of their carrier's pricing plan -- which limits the company's ability to sell them on a pricier plan later.

But the telecoms need to generate more revenue, and in their efforts to do that, they're increasingly looking at plans that bundle video content with their wireless services. It's a natural fit because most of the data consumed on mobile devices -- about 83% -- is used for video streaming.

The best example of a carrier's pivot in this direction is AT&T's recent purchase of Time Warner. The telecom closed the $85 billion deal over the summer, and gained ownership of important media assets like CNN, TBS, HBO, Warner Bros., and others, along with a vast catalog of content.

AT&T's ability to bundle this content with its wireless service could become a key competitive  advantage. It already offers its "Unlimited & More" plan, which adds live video streaming from more than 30 channels to the  usual unlimited talk, text, and data. And, in the spirit of previous plans, AT&T offers a premium tier with higher-definition video-streaming and a subscription to one video content or music service.

With the average customer's cellular data usage expected to climb to nearly 9 GB by 2021, investors should expect to see wireless carriers focusing more of their revenue-growth efforts on content bundling. At the end of 2017, the 50 largest telecoms worldwide had more than 300 million video subscriptions, and brought in more than $89 billion in video revenue for the year, up 8% from 2016.

But AT&T is in a better position to benefit from this trend than its rivals. Verizon tried to bundle its own video content with its go90 platform, which proved to be a $200 million mistake. Meanwhile, Sprint and T-Mobile have opted to bundle already-popular video content streamers into their plans -- Hulu and Netflix, respectively -- rather than buying or creating services of their own.

AT&T, though, now has the ability to bundle quite a lot of high-quality content -- content that it already owns -- with its plans. If it can use that leverage to push its customers further up the pricing ladder, it could be the clearest beneficiary of the massive growth trend in video data usage.