The 21st Century is turning into the century of drones -- in business, in recreation, and even in war. One development I've been waiting for years to see, though, is the invention of a drone aircraft capable of shooting down another drone aircraft in air-to-air combat. So imagine my surprise when I heard not only that this has finally happened, but that it actually happened a year ago!

We're only hearing about this now because the U.S. Air Force sat on the news until finally letting it slip in an interview with Military.com last month. In that interview, Military.com reported that last November a General Atomics MQ-9 Reaper drone, operating in a controlled environment, successfully used "a heat-seeking air-to-air missile" to shoot down a "small, aerial vehicle" -- the first time such an engagement is known to have taken place, even in testing.

It won't be the last time. 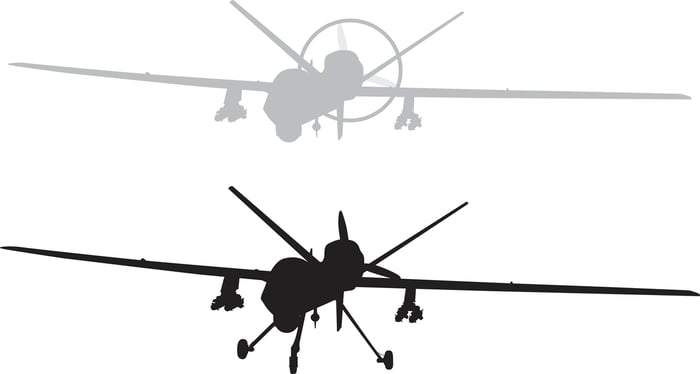 As Military.com opined, "near-peer threats such as Russia or China ... are advancing their skill sets ... in unmanned aerial vehicles." We're rapidly advancing toward an environment in which future wars may involve "hybrid" combat "by proxy" forces such as remotely operated drone aircraft, tanks, and underwater vehicles. In evidence of which, just last week The National Interest ran a story describing how the U.S. Air Force and DARPA are working to integrate into American F-35 and F-22 aircraft -- and even fourth-generation fighters such as the F-15 and F-16 -- the ability to control drone "wingmen" to augment their own combat capability.

Initially, such capability will probably focus on using unarmed drones to provide surveillance and targeting information. But TNI further noted how Boeing (NYSE:BA) has been contracted to revive obsolete F-16 models and convert them into remotely piloted drone aircraft. Viewed in conjunction with last month's drone dogfight revelation, this suggests we might soon seen piloted F-16s flying into combat, accompanied by unmanned "drone" versions of that very same aircraft flying in support.

So what should investors be making of all this as we attempt to peer into our crystal balls and forecast the future for defense contractors? I see at least two major possibilities.

The first keys off of Boeing's role as a converter of older fighter jets into modern drone aircraft. The MQ-9 Reaper that shot down a drone last year is a marvel of engineering, and its success promises to yield additional revenue for the Reaper's maker, General Atomics, as the Air Force works to further develop this capability. That being said, the top speed on a Reaper is just 300 mph -- versus a top speed of better than Mach 2 for Lockheed Martin's (NYSE:LMT) F-16.

GA's Reaper may perform well against other drones in its class. But in any dogfight between a propeller-driven Reaper and a modern jet fighter (piloted or otherwise), the Reaper's going down -- and fast.

But what if the Air Force should accelerate its efforts to convert old piloted jet aircraft into unpiloted drones, as it's doing with Boeing's help already? The Air Force's "Airplane Boneyard" at Davis-Monthan Air Force Base in Tucson, Arizona is currently home to some 4,400 mothballed military aircraft -- nearly as many planes as our entire active-duty Air Force boasts already.

Should the repurposing of formerly piloted aircraft as unpiloted drones become a trend, America effectively has an entire second air force sitting out there in the desert waiting to be overhauled and reactivated. That's a huge potential revenue stream for companies like Boeing and Lockheed that could do the work.

A second possibility to consider, though, is that the Air Force might prefer to develop an entirely new, purpose-built kind of drone jet fighter -- one that might be smaller, more maneuverable, and less fuel-hungry than a plane built with the need to contain and sustain a live pilot on board. Indeed, one company -- Kratos Defense & Security (NASDAQ:KTOS) -- has effectively gambled its business on an effort to develop just this kind of purpose-built, jet-powered combat drone, known as the "Mako" drone fighter.

Kratos has gained some momentum lately, winning Air Force contracts to develop this and similar drones. If drone dogfighting turns out to be the next big trend in defense, Kratos could win even more contracts and become an ace for investors in the brave new world of drone combat.