One of the biggest beneficiaries of the 2016 election was specialty truckmaker Oshkosh Corporation (NYSE:OSK). The stock market began bidding up shares of the Wisconsin-based company immediately after the election, and kept it up throughout 2017. But 2018 proved to be a huge disappointment for investors, as Oshkosh's share price tumbled to levels not seen since before the 2016 election.

However, things may be starting to turn the corner. The company's strong fourth-quarter and full-year fiscal 2018 earnings report, released on Nov. 1, sent shares up by about 19%. Here's why the market was so pleased with this beaten-down manufacturer.

The increases in net income, EPS, and operating cash flow are particularly impressive given that overall sales were up by less than 5%.

Finally getting some love

It's good that the market finally seems to be rewarding Oshkosh for its outperformance; that hadn't been the case earlier this year.

In November 2016, with Republicans poised to take complete control of the federal government for the first time in a decade, it was assumed that defense spending would increase, boosting sales in the company's defense segment. And President-elect Trump was touting a major infrastructure plan, which was expected to increase demand for the company's construction vehicles like aerial work platforms and cement mixers.

But what the stock market gave the company in 2017, it took away again in 2018. Although defense spending did, indeed, increase, steel and aluminum tariffs resulted in higher materials costs for Oshkosh, and the proposed trillion-dollar infrastructure plan failed to materialize. The market seemed to focus on its lofty expectations for the company going unmet, and ignored Oshkosh's actual performance.

Throughout its 2018 fiscal year -- which ran from October 2017 to September 2018 -- Oshkosh was handily outperforming its fiscal 2017 performance. Quarter after quarter, earnings were up in all four of its business segments, with two exceptions: In both the third and fourth quarters, the company's defense unit was hit by a lack of international sales for its Mine-Resistant Ambush-Protected All Terrain Vehicle (M-ATV), causing earnings declines in those quarters.

In the current quarter, strength in earnings was apparent across all of the company's non-defense divisions. Access equipment sales were only up 27.2% over the prior-year quarter, but thanks to improved pricing, operating income from the segment rose by an astonishing 103.5%. Similarly, although the commercial segment saw a 2.2% decline in sales, higher prices drove an increase in operating income of 52.6% over the prior year. That's evidence of how well management is maximizing operational efficiency. 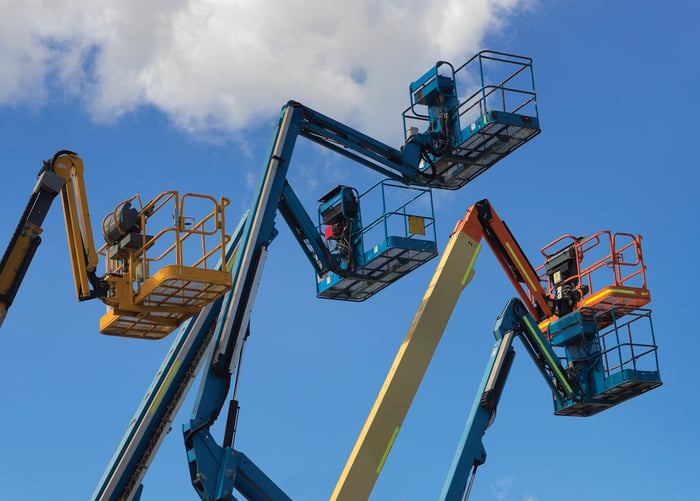 Oshkosh Corporation has been beaten down by the stock market, but its earnings from sales to the construction industry have been impressive. Image source: Getty Images.

Looking ahead to fiscal 2019

CEO Wilson Jones provided guidance for the company's 2019 fiscal year, as well as a cautionary note. While he anticipates continued increases in sales and earnings -- including EPS of $6.50 to $7.25 (versus $6.29 for fiscal 2018) and projected net sales between $7.85 billion and $8.15 billion (vs. $7.7 billion in fiscal 2018) -- steel tariffs and other higher costs are still causing him some concern.

"We still face headwinds, including sharply higher raw material costs and continued global trade uncertainty," Jones said in a press release, "but the performance of our team members in fiscal 2018 gives me confidence as we begin a new fiscal year." On the earnings call, Jones elaborated on how this might affect the company in 2019:

We experienced significantly higher material and other costs including freight in 2018, the full impact of which we expect to see flowing through our income statement in 2019. The market for aerials and telehandlers is strong, and ... we have announced a higher-than-typical price increase at [aerial and telehandler manufacturing subsidiary] JLG for the new calendar year. We expect that some customers will push back, but they also understand steel prices have jumped significantly since last fall. Negotiations may take longer this year in light of the larger-than-normal price increase.

In other words, although the economic climate is creating headwinds for companies that make giant heavy things out of metal, Jones expects the company will continue to outperform. 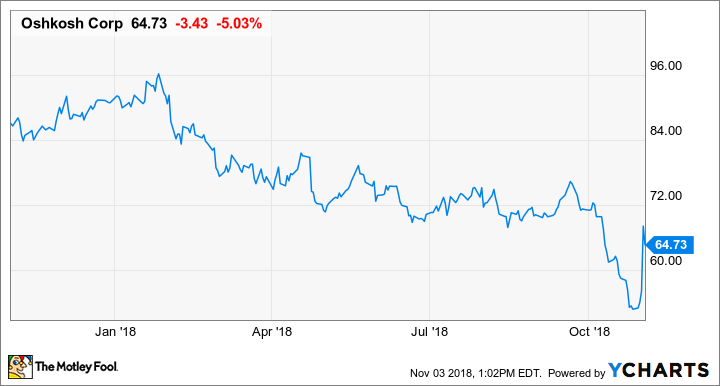 This was a solid quarter in a solid year for Oshkosh. While the market seemed to be fixated on the opportunities that didn't come to fruition -- and the higher steel prices that did -- Oshkosh successfully grew revenue and earnings in spite of it all, and rewarded shareholders through buybacks and a dividend increase to boot.

While growth at this company can be lumpy thanks to the irregular timing of defense contracts, and there may be some issues surrounding higher steel prices that crop up in the form of thinner margins on backlogged sales, Oshkosh looks like a buy at its current share price.