The Mac maker still has a long way to go before it gets net cash to $0.

Earlier this year, Apple (AAPL -0.66%) laid out its long-term goal to reach "net cash neutral" over time, vowing to return enough capital to shareholders to bring its net cash position to $0. That's no small task, considering the sheer size of Apple's cash position as well as its cash-generating capabilities. The Mac maker has historically generated so much cash that it can't return it fast enough to investors, and its net cash balance had continued marching higher for years.

That all changed following tax reform last year, which is largely what paved the way for the new net cash neutral goal.

Here's a breakdown of Apple's cash position as of last quarter:

Apple still has another $122.6 billion to give back in the years ahead. Tax reform unlocked Apple's overseas reserves, dramatically changing the company's ability to return capital while also eliminating the need to keep issuing debt. Apple has significantly ramped up its share repurchase activity, having bought back $62.9 billion worth of stock so far this year. For context, that's nearly as much as Apple bought back in 2016 and 2017 combined ($66.1 billion). Those aggressive buybacks this year have helped take a meaningful chunk out of Apple's net cash. 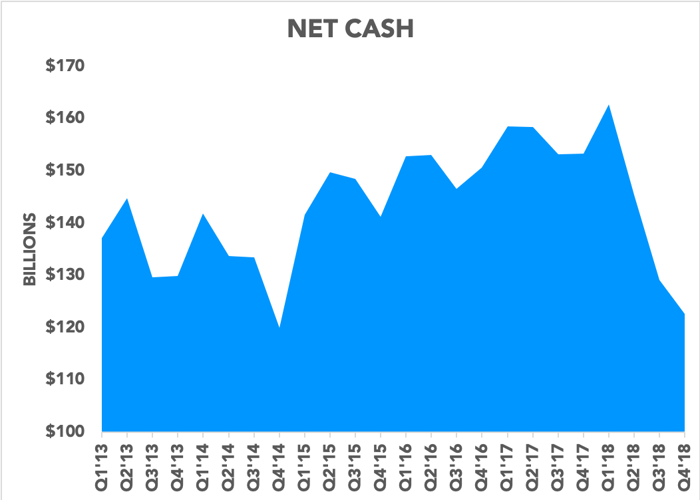 It's now been a year since Apple conducted a bond offering, selling $7 billion worth of paper in November 2017. As it no longer needs to raise debt capital, the task turns to returning as much cash to shareholders as quickly as possible, while slowly paying down debt as the bonds mature over time. Apple has about $8.8 billion worth of debt that matures within the next year, after paying back approximately $7 billion in principal earlier this year.

Meanwhile, the tech titan has also been winding down its own bond investment portfolio, letting the bonds it holds mature without rolling them back into new investments. You can see it playing out in the company's cash flow statement, which shows reduced purchasing activity even as bond proceeds roll in.

Apple is making rapid progress toward its net cash neutral goal, but it will still take a few more years.