Starbucks (NASDAQ:SBUX) reported a strong finish to its 2018 fiscal year, showing a rebound in comparable sales in the U.S. and China during the late summer and early autumn months. It's existing high-growth Asian business has been struggling all year from a wave of worry over slowing economic growth and lots of competition. Nevertheless, Starbucks is buying the dip as it plans to build thousands of new stores in China over the next few years. Investors, take note: Starbucks is indicating the Chinese consumer will be just fine.

Starbucks helped make the coffee shop an omnipresent fixture in cities all over the world. As it played a pivotal role in getting the movement rolling, it is now one of the largest restaurant chains in the world, closing the gap on the most number of locations with companies like Subway and McDonald's (NYSE:MCD).

With its days of super-fast new store openings behind it in the developed world, driving foot traffic and larger guest tickets at existing locations is a key metric for Starbucks. Comparable store sales, as foot traffic and guest ticket size is called, can be volatile; and as Starbucks gets bigger, those numbers have also been trending lower.

The volatility in comp sales was on full display this past year. Though Starbucks notched a slight increase globally, it made up lost ground in its fourth quarter -- especially in China where comparable sales fell 2% the quarter prior. Despite that slowdown in traffic and transaction size, though, the country remains Starbucks' key driver of overall growth (China and the Asia Pacific region accounted for 53% of Starbucks' total revenue growth over the last year). That's because increasing customer visits is the name of the game in the U.S., but there is still plenty of room for new construction on the other side of the world.

Why China can fuel year's of growth

At the end of the 2018 fiscal year, Starbucks had a total of 29,324 stores worldwide. Of those, only 3,500 were in China, the world's most populous country. Starbucks is trying to change that, as it opened up a net 585 new stores during the year and entered 17 new cities. 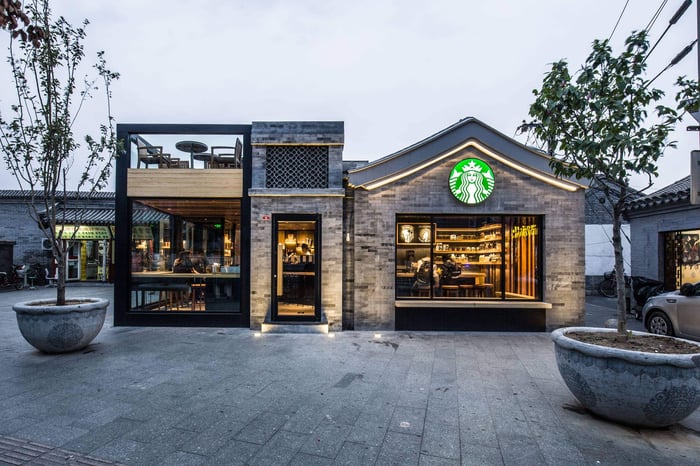 Thus, while comp sales in China are indicating a slowdown in consumer spending, there are plenty of consumers that have yet to be introduced to the Starbucks brand. The coffee chain expects to open 2,100 net new stores in 2019, with nearly 600 of those going to China alone. The goal is to grow the store base in the emerging country to about 6,000 by 2022.

Starbucks is taking cues and doing battle with Yum China (NYSE:YUMC), China's largest restaurant chain and licensee of KFC and Pizza Hut. KFC has made coffee a key growth driver and is also trying to double its store base over the next decade. Starbucks is fighting back with new menu initiatives like "coffee meets ice cream" and growing its delivery business.

That fierce competition helps explain the comp sales slowdown even as new stores open at a rapid pace. China's restaurant industry can handle the fight, though, because its middle class is still developing and growing. After many years of "growth at any cost," China is transitioning to higher quality expansion of its economy, propping up its middle class by increasing spending power and fostering domestic consumption. The rate of expansion is moderating, but the International Monetary Fund predicts 6% GDP growth in 2019. That's certainly nothing to balk at.

Quarter to quarter results will continue to be mixed and volatile, but the Starbucks' China strategy is working even though it hasn't been the best of years for the country. While a steep comparable sales slowdown might seem concerning, buying into the weakness and betting on the long-term growth of the emerging economy and consumer should pay off. Investors who have skin in the game across the Pacific, take heed and follow Starbucks' lead.