Please ensure Javascript is enabled for purposes of website accessibility
Log In Help Join The Motley Fool
Free Article Join Over 1 Million Premium Members And Get More In-Depth Stock Guidance and Research
By Lee Samaha – Nov 7, 2018 at 8:00AM

The diversified industrial fell in line with its peers, and its results failed to inspire, but management could be about to release some value in the stock.

Shares of United Technologies (RTX 1.53%) dropped 11.2%, according to data provided by S&P Global Market Intelligence. While the stumble may have rattled some investors, it was pretty much in line with peers like Honeywell International and General Electric during October. In general, the sector has been sold off due to fears of a cyclical slowdown in the U.S. and the evidence of a slowdown in China.

Given that United Technologies gave third-quarter earnings in the month and raised full-year earnings guidance for the third quarter in a row, it's unlikely that the sell-off is due to anything in the company's 2018 performance. 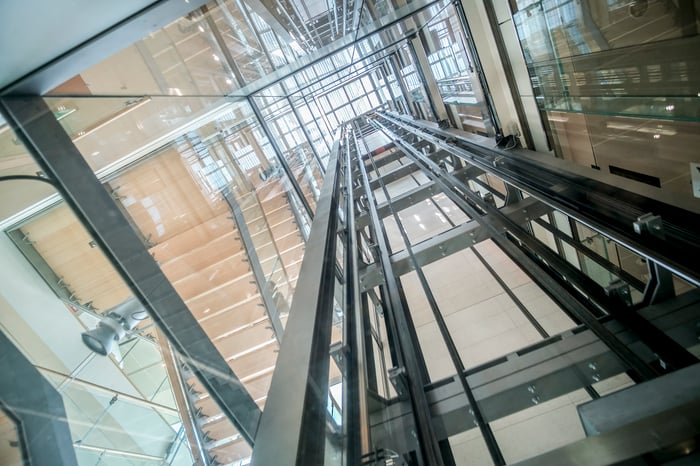 Focusing on developments with the company itself, the key takeaway from the recent earnings is that the aerospace businesses (United Technologies Aerospace Systems, or UTAS, and Pratt & Whitney) continue to outperform Otis and the Climate, Controls and Security, or CCS segment.

In fact, the improving performance at UTAS has been solely responsible for the guidance hikes in 2018 and Pratt & Whitney is doing well to still be on track with its production targets for its geared turbofan engine.

The aerospace segment's outperformance is relevant for two reasons.

First, the takeover of Rockwell Collins (COL) should close any day now, and when it's completed, United Technologies will become even more focused on aerospace, so it's good news that its aerospace markets are performing well.

Second, CEO Greg Hayes has previously talked of breaking up the company into three different parts: one monolithic aerospace company including Rockwell Collins, Otis, and CCS. As noted previously, these businesses are seeing a diverging performance and are subject to different market conditions -- in short, they could probably do with more management focus.

For example, Otis needs to deal with competitive challenges in a tough China market and is battling to increase service revenue, while CCS needs to improve margin, while the aerospace businesses need to deal with the long-term challenge from Boeing trying to muscle in on suppliers.

Aside from macroeconomic considerations, the key question is what will Hayes and the United Technologies board decide to do with the company after the Rockwell Collins deal is completed. Engineering a breakup could release a lot of value in the portfolio.

It's something hedge fund managers have been clamoring for in 2018, and they may well get their wish soon enough. All told, there's a lot going on at United Technologies, and investors should prepare for a lot of news flow in the coming months.