Given recent market weakness, it's time to start looking at stocks that have been beaten up, and one sector worth looking at is aerospace. The first place to look is usually The Boeing Company (NYSE:BA) -- but what about the companies that supply and service the aerospace industry? There are myriad small and mid-cap stocks with heavy exposure to Boeing and Airbus, so let's look at three stock ideas for investors.

The case for buying Boeing and other commercial aviation related stocks is based on projections for long-term passenger growth, and, to a lesser extent, growth in the cargo market. The International Air Traffic Association (IATA) sees passenger numbers growing at a 3.5% annual rate in the next two decades, while Boeing predicts 4.2% growth for cargo traffic in the same period.

If these projections are correct, airlines are going to need a lot more aircraft -- Boeing forecasts the global fleet will grow by 3.5% a year over the next 20 years. And since airlines require multiple pilots (often six co-pilots and six captains for narrow-body and eight each for wide-body), every airplane implies a significant increase in demand for flight simulators and pilot training. This is where CAE Inc. (NYSE:CAE) comes in. 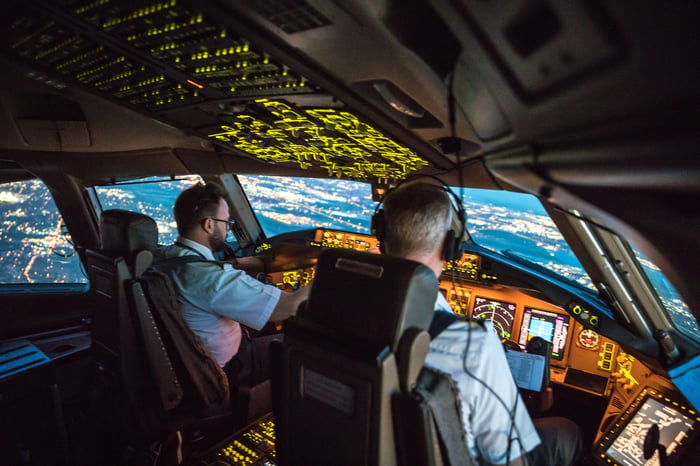 CAE is the market leader for civil aircraft simulators, and generates 60% of its revenue from civil aviation training (37% comes from defense and security). While simulators capture the most attention, the company actually makes 60% of its revenue from services and 40% from its products. In fact, CAE estimates that the training market is six times larger than the simulator market, and given that it only has a 33% share of the global training market there's ample room to grow within this attractive end market.

Management estimates there are 360 thousand active pilots now, with 150 thousand needed for replacement in the next decade and 170 thousand for growth. This makes 320 thousand new pilots that need training in the next decade. Given a combination of end market growth and market share growth in training services, it's not hard to see CAE growing revenue in the mid-single digits over the long-term.

If CAE can leverage this into double-digit earnings growth -- analysts are predicting 6.6% revenue growth and 13% EPS growth for 2019 -- then the stock looks like a good value at its current PE ratio of 17 times earnings.

A small-cap stock focused on aerospace

With a market cap of less than $3 billion, Barnes Group Inc. (NYSE:B) is hardly a household name -- but its customers are some of the biggest names in the automotive and aerospace sectors, including companies like Ford, General Motors, GE Aviation, United Technologies, and Boeing.

Barnes operates out of two segments, with the industrial segment (molding solutions, nitrogen gas products, and engineered components) currently generating twice the sales of its aerospace (original and aftermarket engineered components) segment. However, the aerospace segment's 20%-plus margin (compared to industrials' 14% margin) means Barnes currently generates 42% of its profit from aerospace.

Unfortunately, its industrial growth is challenged in the near-term by a combination of a slowdown in automotive production, tariff-related trade disputes, and the impact of trade disputes on growth in China. Meanwhile, the aerospace outlook is very strong, and with its exposure to the Airbus A320NEO and the Boeing 737 MAX Barnes stands well placed to profit in the future.

Based on analyst estimates, Barnes trades at 17.7 times its 2018 earnings; and with management predicting around 100% of net income to convert into free cash flow, Barnes is reasonably priced for a business with good long-term prospects in aerospace.

A small cap with exposure to all the leading aircraft programs

Another small-cap stock that's far from being a household name, RBC Bearings (NASDAQ:ROLL) is, as the name suggests, a producer of highly engineered bearings. It's not the highest profile business out there, but if you are going to run mechanical machinery then you will need bearings in order to reduce friction, damage, and wear loss -- things that can impact the functioning of highly expensive equipment.

Two-third of sales go to the aerospace market (Boeing, GE Aviation, United Technologies etc.), with the rest going to industrial customers such as Caterpillar. The recent second quarter 2019 results saw the company generating adjusted organic sales growth of 7.3% in the quarter, with aerospace net sales up 7.5% and overall operating income margin expansion.

The aerospace sales growth is impressive enough, but it's likely to get even better in the future. As with many other small aerospace suppliers, RBC has been impacted by supply chain constraints, and "aircraft build rates driven principally by engine availability continued to hamper the industry," according to CEO Michael Hartnett on the company's earnings call. However, he believes "We are getting to the other side of this problem and growth in the double digits in this sector is within sight."

With exposure to the major narrow-body programs (Airbus A320 and Boeing 737) and their engines (CFM International's LEAP and Pratt & Whitney's geared turbofan) RBC is primed for growth for many years to come.

The pick of the three stocks

If forced to choose one of the three, then CAE probably looks like the best option. The valuation is attractive, and the company's long-term growth pathway includes an opportunity to grow market share in higher-margin training services. It's a secular as well as a cyclical growth story, and the company's leading position with simulators gives it an advantageous competitive position.