Blamed for a final assembly slowdown that plagued Boeing during the first half of the year, Spirit AeroSystems says it now has its act together.

Spirit AeroSystems (SPR -1.33%), a key component and of late a choke point in Boeing's (BA 0.35%) sprawling international supply chain, reported a mixed third quarter typical of a company in the middle of a transition. Management's commentary on 2019 and beyond provides reason for hope the worst is in the past for this pivotal aerospace supplier.

Spirit reported third-quarter earnings of $1.70 per share, besting the $1.64 consensus, though that beat was helped by an $0.08-per-share decrease in tax rate and an unspecified benefit from recovery of legal fees. Revenue in the quarter rose 4% to $1.81 billion, but that figure was short of analysts' $1.83 billion estimate. 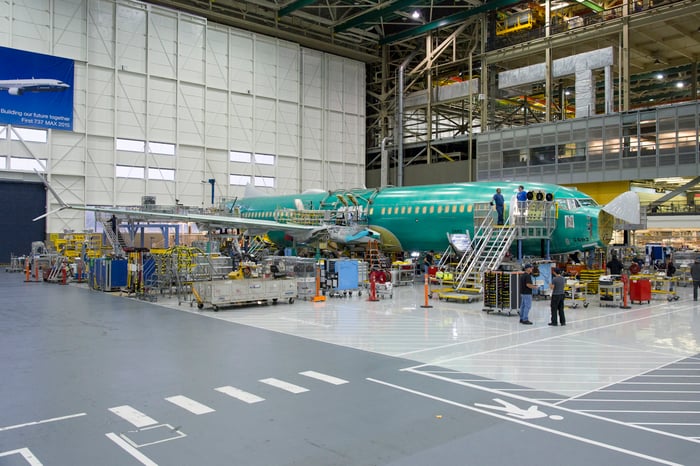 Spirit, maker of fuselages for Boeing's 737, as well as a range of other components for aircraft, defense, and propulsion systems, was blamed earlier this year for slowdowns at Boeing's 737 final assembly plant. Here's where things stand for the company now, and why management is optimistic its operations will improve going into 2019.

Getting up to speed

Company officials on a call with analysts said that Spirit has fully recovered from delays that had rippled through Boeing's 737 assembly line, though those improvements came at a cost. Spirit's operating expenses for the quarter were up 3%, to $1.6 billion, in large part due to increased employee costs and express shipping of fuselages from Spirit's facility in Wichita to Boeing's Renton, Washington, assembly site.

Spirit shipped 160 737 fuselages in the quarter, ahead of Boeing's production target of 52 aircraft per month. The company insists that it will be ready to go, assuming Boeing follows through on its plan to boost 737 production to 57 frames per month next year. Spirit says it has built a buffer into its production line and hired about 90% of the total employees needed to handle the increase, getting them in early enough to do training ahead of the ramp-up.

"With this level of preparation, we are very confident in our ability to execute a smooth rate break to 57 aircraft per month," CEO Thomas Gentile said on the call with investors.

Part of the issue Spirit has had is shifting between 737 MAX fuselages and older 737NG models, which the company says are about 35% different from the MAX. Production is currently split evenly between the two, but by next year the MAX should account for about 90% of production.

The next step is to bring down costs. Fuselage segment margins improved slightly in the third quarter, to 14.8% from 14.3% in the second quarter, as the company got on a steadier pace and was able to reduce overtime. The company expects margins to expand to around 16.5% by mid-2019, if not sooner, on higher program revenue for not just the 737 but Boeing's 787 and the Airbus A320 and A350 as well.

Interestingly, Boeing's planned boost to 57 frames per month should help Spirit's efficiency, because it will allow the company to deploy three lines, each producing 19 aircraft per month. Right now, the third line is only producing one frame every few days, causing staffing choppiness and other productivity issues.

Even if improvements do lead to a better 2019, there's no assurance those gains are sustainable. There are limits to cost cuts and efficiency gains, and with rates for the 737 program set to be renegotiated in the next few years, look for Boeing to try to step in and capture some of that added productivity via lower contract prices.

Spirit's answer to this risk, at least in part, is diversification. The company, a onetime wholly owned subsidiary of Boeing that still generates nearly three-quarters of its sales from its former parent, in May announced plans to acquire Asco Industries for $650 million in cash. Asco, a privately held Belgium-based manufacturer, generates about half of its revenue from Airbus and another 30% from other non-Boeing customers, and would help reduce Spirit's reliance on Boeing.

Unfortunately, the Asco deal has hit some turbulence. Spirit last month pulled its transaction notice on the acquisition from the European Commission after regulators flagged issues with the merger plan.

Gentile on the call provided a little more color about the issues, saying they relate to technicalities in the way Airbus was structured when the consortium was pieced together in the 1970s. Gentile said Spirit has been "working very constructively" with Airbus on the issue, and anticipates being able to resubmit the merger notice without impacting the deal:

These issues do not involve any divestitures, nor do we anticipate they will impact the economics of the deal. We remain confident that we will close the deal, and we continue to be very enthusiastic about the strategic fit of Asco with the rest of our operations.

It's unclear whether the delay will impact the timing of the transaction, which Spirit had originally hoped to close by year's end. Any delays have the potential to ding margins in the fourth quarter or into 2019, due to higher legal fees or added interest expenses while the company awaits closing.

A drawn-out process also reduces the likelihood Spirit would seek out any further acquisitions in the near term.

Better, but not best

Spirit is attractively priced, trading at about 14 times forward earnings, a discount both to industry leader TransDigm's 21.7 P/E, as well as more diversified aerospace suppliers like Honeywell and United Technologies. Spirit also seems to have momentum on its side, having cleared most of its 737 issues and making steady (if slow) progress on its plan to diversify.

Gentile, on the job since August 2016, has a solid plan in place and is doing a good job of both streamlining Spirit for better results today and positioning the company to be more resilient in the future. That's no small feat, given that shares of the company spent most of the period between its independence in 2006 through 2013 below its go-public price.

But given the company's continued reliance on Boeing, and the aerospace giant's relentless push against suppliers for more favorable terms, Spirit is a risky choice for investors who want exposure to the continuing commercial-aerospace upswing. I'd prefer owning TransDigm, with its concentration of proprietary products that are hard to commoditize, or even Boeing itself.

Spirit's doing all the right things, and the entire commercial aerospace supply chain will run smoother thanks to the company's improvements. It's just unclear that Spirit shareholders will be the primary beneficiaries when all is said and done.

Why Shares in Spirit AeroSystems Are Surging This Week