A welcome product pull-in from Chipzilla.

Chip giant Intel (INTC -6.41%) has been having solid success with its cellular modem chip efforts over the last several years, as it scored some of Apple's (AAPL 1.37%) iPhone modem orders in 2016 and became the exclusive supplier of modems for this year's latest iPhones with its first gigabit LTE modem, known as the XMM 7560.

A little while back, Fast Company reported that Apple will be using Intel's upcoming XMM 8160 5G modem inside of its first 5G iPhones that'll launch in 2020. 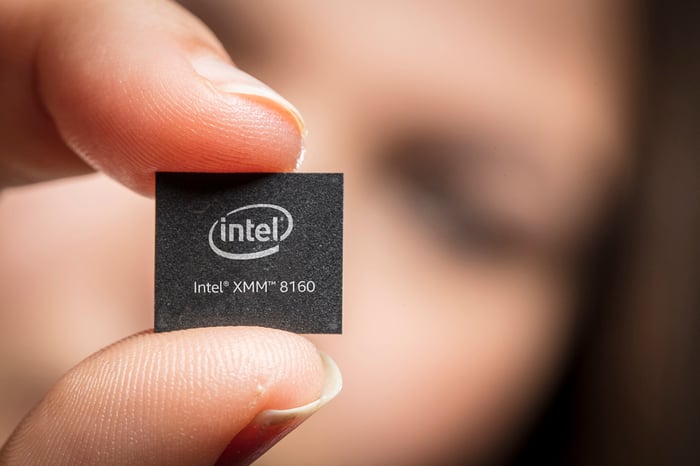 On Nov. 12, Intel announced that it will be pulling in the launch of the XMM 8160 and also disclosed key details of the device. Let's take a look at what the chip giant had to say.

Intel and the half-year pull-in

Intel said in a news release that it's "pulling in the launch by more than a half-year."

The chip giant claims that the modem will be "available in the second half of 2019 and will deliver the features and experiences to accelerate widespread 5G adoption."

While the company will be shipping the modems in the second half of 2019, Intel says that devices incorporating the modem "including phones, PCs and broadband access gateways are expected to be available in the first half of 2020."

The timing of this news release is interesting since Fast Company reported that Apple "has been unhappy with Intel lately," stating that "[the] most likely reason relates to the challenge of solving heat dissipation issues caused by the [XMM] 8060 modem chip."

I wouldn't be surprised if this news release from Intel was intended to reassure investors that the development of the modem that's supposed to power Apple's first 5G iPhones is on track in light of the Fast Company report.

Apple, the main buyer of Intel's cellular modems, typically announces new iPhones in September -- well into the second half of a given year. If the XMM 8160 is available to customers in the second half of 2019, then it should be out with plenty of time to spare to support Apple's 2020 iPhone launches.

Intel says that the XMM 8160 "will support peak speeds of up to 6 gigabits per second, making it three to six times faster than the latest LTE modems available today."

So, the XMM 8160 should be a huge jump in peak download capabilities compared to Intel's current and upcoming LTE modems.

Intel also explains that the XMM 8160 is a "multimode modem, meaning it will support the new standard for 5G New Radio (NR), including stand-alone (SA) and non-stand-alone (NSA) modes, as well as 4G, 3G and 2G legacy radios in a single chipset."

Although Intel has now announced the timing and features of the XMM 8160, it didn't say what chip manufacturing technology it would be built on in its press release. According to Fast Company, it'll be manufactured using Intel's 10nm technology, the successor to the 14nm technology that's used to build Intel's current XMM 7560 and will be used to craft the upcoming XMM 7660.