Investors were quick to embrace the first-quarter results from this Canadian maker of family-friendly TV shows.

Shares of DHX Media (WLDB.F 0.24%) rose as much as 13.1% higher on Tuesday morning following the release of decent results for the first quarter of fiscal year 2019. As of 2:50 p.m. EST, the content studio behind family-friendly fare such as Peanuts, Strawberry Shortcake, and Teletubbies had settled down at a 12.4% gain. 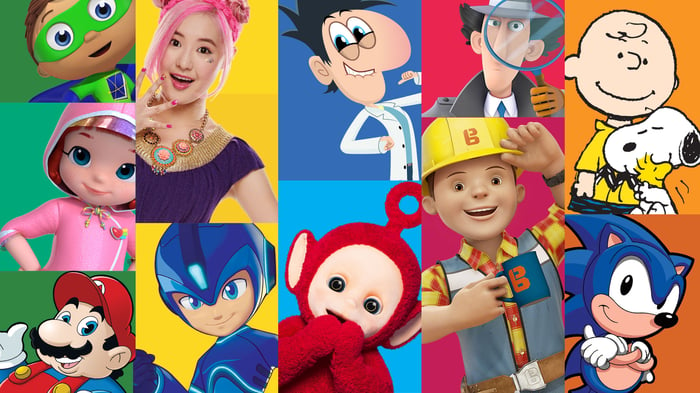 These are some of DHX Media's most recognizable characters. Image source: DHX Media.

Before we start, let me highlight the fact that this Halifax-based company reports its financial data in terms of Canadian dollars. The U.S. dollar has strengthened against its northern neighbor by approximately 4% over the last year, in case you want to adjust the growth figures accordingly.

DHX Media's first-quarter sales rose 5.5% year over year to $104 million, including a $2.4 million headwind from the adoption of new accounting standards, starting in this quarter. Under the new IFRS 15 policy, content license revenues are amortized over the term of each license rather than recognized as a single up-front lump sum. On an apples-to-apples basis, revenues increased 7.9% under the previous accounting method.

The company recorded a net loss of $0.02 per share, down from $0.06 of positive earnings per share in the year-ago period.

I was unable to find any analyst estimates for this period, and DHX Media doesn't really do financial guidance, so it's hard to say whether these results were objectively good or not. The market reception was certainly much warmer than the 20% plunge that the third-quarter report triggered, not to mention the 41% drop that followed the company's preliminary fourth-quarter report in September. Investors appear to be fairly pleased with these results, negative earnings notwithstanding.

The WildBrain family of kid-oriented YouTube channels expanded its first-quarter revenues by 49%, accounting for 16% of DHX Media's total sales. WildBrain is the company's healthiest business unit at the moment, and management believes that DHX has only just begun to "scratch the surface of this unique and strategic asset."

That being said, DHX Media's shares have suffered a 46% drop so far in 2018, including today's big bounce. On the other hand, the stock is sitting 166% above September's multiyear lows. This extreme volatility is likely to continue running rampant until the company starts reporting predictably positive earnings and cash flows.