Please ensure Javascript is enabled for purposes of website accessibility
Log In Help Join The Motley Fool
Free Article Join Over 1 Million Premium Members And Get More In-Depth Stock Guidance and Research
By Anders Bylund – Updated Apr 22, 2019 at 11:52AM

The maker of children's video content under popular names like "Peanuts" and "Teletubbies" fought heavy currency-exchange headwinds in the second quarter. 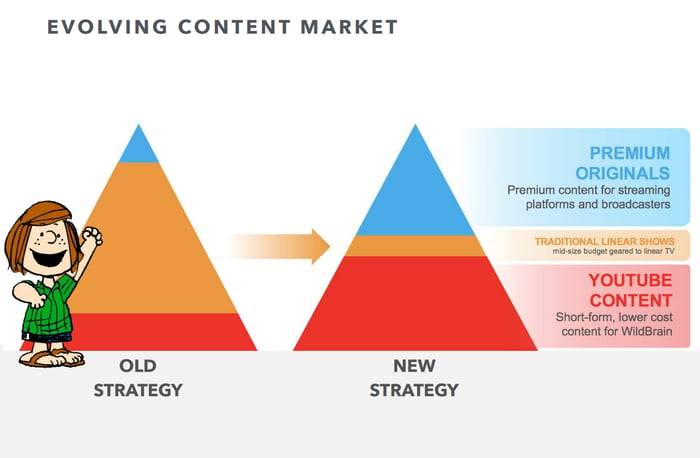 In a prepared statement, DHX Media CEO Michael Donovan addressed how the company is performing with regard to the stated three-prong strategy for fiscal year 2019.

"In our second quarter, we made progress against our three strategic priorities of producing premium content, growing WildBrain and improving cash generation," Donovan said. "We signed the largest content deal in the history of the company, which we believe will contribute steady EBITDA for the coming years, and WildBrain continued to deliver double-digit growth. We also experienced a 7% rise in consumer products revenue from Peanuts."

The "largest content deal" in the company's history that Donovan mentioned was a worldwide distribution agreement for a slate of new Peanuts episodes.

Donovan also noted that his company is relying on digital production and distribution tools to a high and growing degree. The company carries exclusive distribution deals with all the major digital video platforms through titles like Carmen Sandiego, The Adventures of Rocky and Bullwinkle, and Supernoobs. DHX Media's highest-value premium brands such as Peanuts, Strawberry Shortcake, and Teletubbies are developed and distributed to global audiences through a variety of nonexclusive contracts.

The company signed up a package of 10 new distribution territories for The Deep, an animated series about a family of underwater explorers. That show now reaches more than 40 different platforms around the world, including Netflix (NFLX -1.78%).