An industry-wide transition should benefit this key Apple supplier.

Chip giant Broadcom (AVGO -1.27%) is a key supplier of chips for Apple's (AAPL 1.35%) popular iPhone product line. Indeed, TechInsights recently did a teardown of the latest iPhone XS Max, and it found a Broadcom Wi-Fi/Bluetooth chip, 3D Touch sensor, as well as an Avago front-end module (FEM) chip. (The current Broadcom Limited was formed through the combination of companies called Broadcom and Avago.)

Apple is a big customer of Broadcom's, with Broadcom saying in its most recent 10-K filing that "aggregate sales to Apple, Inc., through all channels, accounted for more than 20% of our net revenue for fiscal year 2017 and 15% for fiscal year 2016." 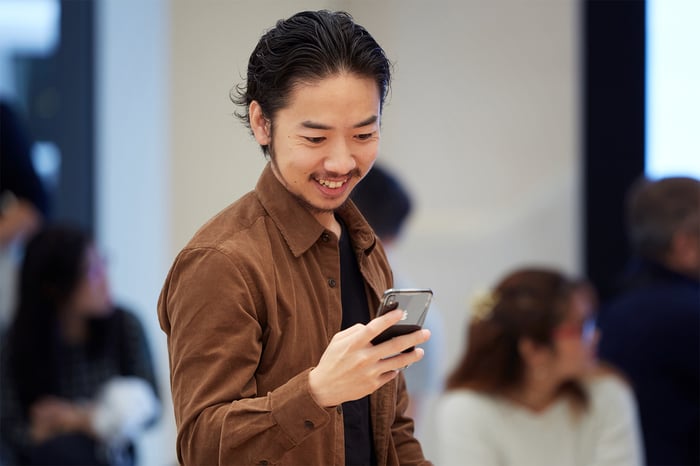 Although iPhone unit shipments have stagnated in recent years, Broadcom has managed to grow its Apple-related business through increases in the total value of the chips that it supplies into each iPhone. Although Broadcom's wireless business is set to suffer a setback this year as Apple lost some content in the iPhone XR to a competitor, CEO Hock Tan is optimistic that its wireless business will get back to "double-digit growth in fiscal 2020, following a temporary dip in fiscal 2019."

It seems that Apple's upcoming transition to 5G wireless will help support the growth in Broadcom's wireless business. Let's take a closer look at Tan's comments.

Growth in the next iPhone -- and beyond

Even though Apple isn't expected to launch its first 5G-capable iPhone until 2020, Broadcom's expecting a return to double-digit revenue growth in its fiscal 2020. That timing suggests that it expects a solid boost in wireless chip content in Apple's 2019 iPhones.

This isn't a surprise considering that next year's iPhones are likely to use Intel's (INTC -6.41%) XMM 7660 modem, which promises a significant boost in LTE download speeds compared to the XMM 7560 modem that's in all of this year's models. That boost in wireless capability should also lead to a boost in Broadcom's radio frequency (RF) chip content to support the dramatically faster wireless speeds of which this modem is capable.

On top of that, Tan indicated that Broadcom is "well positioned to win back the platform," referencing the fact that it lost business in this year's iPhone XR. The combination of the increase in wireless complexity as well as Broadcom winning the business in the next iPhone XR should help Broadcom achieve its fiscal 2020 wireless growth ambition.

With that said, just getting one year of wireless content growth isn't going to satisfy investors over the long run. Tan said that "with 5G on the horizon, we expect this cadence of annual upgrades to sustain."

"As a result, we are maintaining our high level of investment as the market transitions to 5G," Tan asserted.

RF chips aren't the only things it sells to Apple (as well as to other premium smartphone makers), so it's unsurprising that the executive also indicated that the industrywide transition to the more advanced 802.11ax standard will "continue to keep us in the lead."

"We believe we are very well positioned to sustain this particular franchise over the next several years," Tan claimed.