When a company announces it is making an acquisition and paying double what the target's share price was just the week before, it would be natural to question whether the acquirer is really getting much of a bargain. But when Illumina (NASDAQ:ILMN) announced it was acquiring smaller competitor Pacific Biosciences (NASDAQ:PACB) for $1.2 billion on Nov. 1, Illumina's shares rose 5% the next day, an increase in the company's market capitalization of $2.2 billion, or almost four times what Pacific Biosciences was worth a few days earlier.

Clearly, the market loves Pacific Biosciences as a part of Illumina much more than it did as a stand-alone company. What does the market see in this deal, and is Illumina a more attractive long-term investment now?

Illumina and PacBio, as it is commonly called, are in the business of making gene-sequencing instruments, the "picks and shovels" of the genomic revolution, used to peer into the mysteries of genetic code. Both companies make most of their money by selling the supplies that are needed every time the instrument is used, but Illumina has become the dominant player in the space, growing to a market capitalization of $45 billion. The stock is up 38% in 2018 and has gained a market-beating 111% in the last three years. On the other hand, despite a nice run in 2018, PacBio's shares have been flat over the last three years and the company has never made a profit. 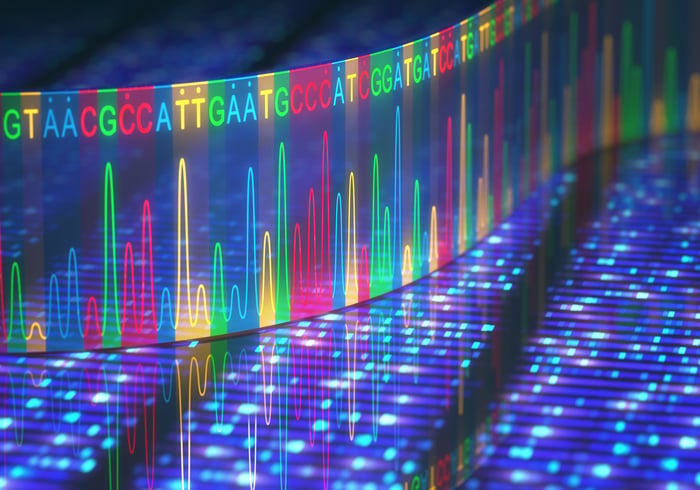 Illumina's technology, called sequencing by synthesis (SBS), first involves chopping the DNA into lots of small pieces, attaching the fragments to a substrate, called a flow cell, and then cloning them over and over again to create a region on the flow cell of identical fragments. DNA consists of a long sequence of four molecules called nucleotides, and the process of reading the sequences of the fragments in the different regions of the flow cell creates flashes of light in four colors, which can be read by detectors. There are thousands of these regions in a flow cell, which are read all at once, and the sequences of the different fragments are pieced together by specialized software to get the big picture of the DNA.

PacBio's approach is called single molecule, real-time sequencing (SMRT), and rather than reading a patch of identical fragments, it actually reads individual DNA molecules directly. The company's sequencers have thousands of "zero-mode waveguides" (ZMGs) -- essentially tiny microscopes that can see to the molecular level as the DNA is sequenced. This approach allows much longer reads than Illumina's SBS sequencers can achieve, and it can detect subtle complexities such as structural variants in DNA that are missed in the massively parallel, short-read SBS technology.

Each approach has its advantages, but Illumina's SBS technology hit the sweet spot in the market -- the right combination of cost, throughput, functionality, and accuracy to make its products the most cost-effective sequencing solutions for the largest commercial markets. As a consequence, Illumina has an installed base of over 11,000 instruments to PacBio's 425.

PacBio's SMRT technology is more expensive to use and has lower throughput, but the long reads have proven important in certain niche applications such as animal studies and crop research. PacBio sequencers can also help access portions of the human genome that are difficult to read with SBS, due to ambiguities that arise when short segments are reassembled.

PacBio's long-read sequencers will immediately open up new markets for Illumina in those niches. But if the smaller company's products have never been able to achieve the scale that Illumina has and are losing money in the process, won't the acquisition of the weaker business just dilute the larger company's success? The wildcard is a major advance that PacBio has in the works. 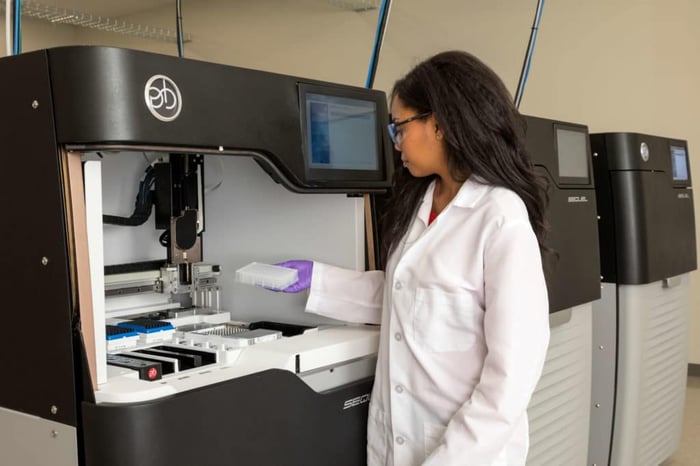 The huge catalyst next year

The payoff for Illumina will be if PacBio can bring the cost of operating its sequencers down to a threshold that opens up major new markets, and company executives believe they are close to that point. PacBio will be testing a new chip early next year that has 8 million zero-mode waveguides, eight times the number of its current Sequel system. The company believes a new model of Sequel with the chip, which could launch in the second quarter of 2019, will put the cost of sequencing the human genome in the ballpark of Illumina's SBS products, about $1,000 per genome, or one-seventh of what Sequel costs today.

Hitting that pivotal price point would open up markets for Sequel where the capabilities of the technology would bring important advantages, but where costs have been a barrier up to now. One example would be large population studies where the ability of PacBio's SMRT technology to detect subtle variations in genes that Illumina's SBS technology can't see would allow researchers to do a more complete analysis of genetic variation in large populations than is possible today. The sheer volume of scans required in such studies make consumable costs a critical consideration. PacBio executives believe that the improvements in throughput and cost that the new chip will bring will expand the accessible market for the company's sequencers from $660 million in 2017 to $2.5 billion in 2022, a 30% annualized growth rate.

Even without the new chip, Illumina's mature sales and service organizations should give a boost to sales of PacBio products. One area that has been a challenge for PacBio is selling its machines into clinical diagnostic markets. The company had partnered with Roche (OTC:RHHBY) to distribute its instruments into clinical settings, but Roche terminated the partnership about two years ago. Illumina believes it can help win regulatory approvals and sell Sequel instruments for applications where the ability of long-read sequencing to detect structural variants is important, such as in tissue typing for transplants and diagnosis of rare genetic diseases.

The deal is not without its risks. First off, the deal needs regulatory approvals from agencies around the world, including the U.S. Federal Trade Commission, which needs to rule that there are no antitrust concerns with the combination. The market seems to think there won't be any issue here, given that PacBio stock is selling for only a 4% discount to the deal price with closure still half a year away.

Probably more of an unknown is how much of a drag PacBio will be on Illumina's results until the growth drivers that motivated the deal kick in. In the second quarter, instrument sales grew a healthy 20%, but sales of consumables hit a speed bump, growing only 6%, as declining sales of supplies for older machines offset a large portion of the gains from Sequel consumables. Overall, revenue grew 7.5% to $21.6 million, and the company lost $22.5 million. Analysts were expecting the company to lose $70 million in 2019, so Illumina may see a temporary decline in its growth rate in the quarters after the deal closes.

Given that PacBio's new 8-million-ZMG chip is central to the reasoning behind the acquisition, any setbacks in bringing the chip to market could hurt the stock. And with new technology like this, a setback is a strong possibility. PacBio had challenges when it introduced its first version of its Sequel chip, and analysts on the call expressed some skepticism about PacBio's ability to manufacture the new version to scale on the timeline given.

There may be some hiccups as the two companies integrate in 2019, but this combination makes a lot of sense. Reducing sequencing costs by a factor of seven -- or even anywhere close to that -- will be a game changer for PacBio, which will also now have access to Illumina's technological and marketing clout to help it succeed. PacBio has a history of disappointing its shareholders, and that may be a big part of the reason the market was not giving it much credit for the huge step forward it should take when the next-generation ZMG chip launches. That market short-sightedness created what could end up being a spectacular bargain for Illumina.

The genomic revolution is still in its early days, and for investors who want to profit as the market for sequencers grows at an 18% annual rate, the choices just got a little simpler. Illumina is the dominant player, and its stock is even more attractive after this deal.