Please ensure Javascript is enabled for purposes of website accessibility
Log In Help Join The Motley Fool
Free Article Join Over 1 Million Premium Members And Get More In-Depth Stock Guidance and Research
By John Ballard - Nov 14, 2018 at 10:00AM

There's a massive growth opportunity at stake, with the global mobile payments market expected to reach $4.6 trillion in the next five years.

The mobile payments market is causing a seismic shift in how people manage money, and it appears to be a ripe corner of the market where investors could make life-changing gains in the decades to come. It's expected to grow 34% annually through 2023, and several major technology and financial companies are vying for position. PayPal Holdings (PYPL 2.23%) certainly looks well positioned following a string of partnership announcements with banks and credit-card companies. The stock price has soared 130% over the last three years following stellar financial performance.

We'll review the company's recent performance, valuation, and strategy to determine whether now is a good time to jump on board this fast-growing digital payment leader. 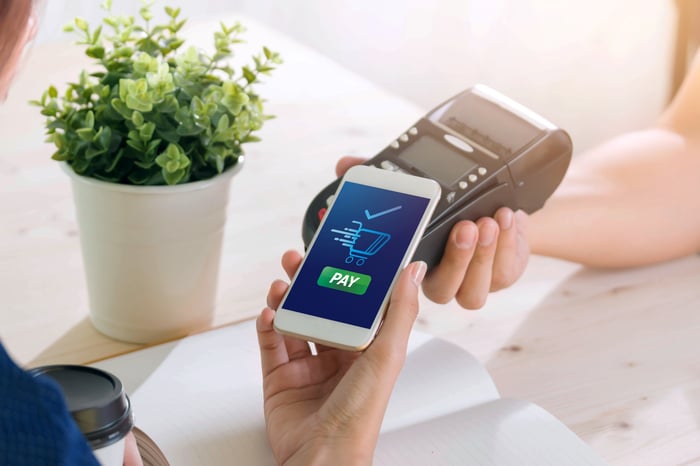 What about the stock's high P/E?

The first thing that may give investors pause when considering buying shares of PayPal is the stock's high valuation. The stock has a nose-bleed trailing P/E of 48. However, the multiple drops considerably as we consider the company's expected growth.

The P/E drops to 35 based on management's 2018 guidance for non-GAAP earnings per share. The shares trade for 29 times the consensus analyst estimate for 2019 adjusted earnings.

It's almost a given that a consistent, high-growth company is going to trade for a high P/E ratio. The S&P 500 index includes some of the best companies in the world and trades for a trailing P/E of 22.3 and a forward P/E of 16.8. Analysts expect the average company in the index to grow earnings 11% per year over the next five years. So, it makes sense that a company that can grow much faster deserves a higher multiple than the S&P 500 as a whole.

PayPal is putting up some big numbers that make it worthy of its premium valuation. The company just posted another impressive quarter of 26% year-over-year growth in adjusted earnings per share, fueled by 27% growth in the total number of transactions over its platform and 24% growth in total payment volume. Analysts expect the company to grow earnings 20% annually over the next five years, consistent with its recent growth.

Can anything stop PayPal?

Of course, PayPal is not the only company vying for position in this booming market. It faces competition from major tech companies, including digital payment services provided by Apple (AAPL 1.62%) (Apple Pay), Samsung Electronics (Samsung Pay), and Alphabet (Android Pay).

PayPal also faces competition from big banks that may feel threatened by a digital economy and the fast growth of peer-to-peer (P2P) payment services, such as PayPal's Venmo app. Venmo is on pace to generate $70 billion in annual payment volume as it becomes a go-to source of funds in the daily lives of its users. Banks have offered their own P2P service called Zelle to counter apps like Venmo.

While PayPal is growing at a fast pace, Zelle has delivered strong results for the major banks, including Bank of America, Capital One Financial, and Wells Fargo. Transaction volume across the Zelle network increased 83% to reach $106 billion in total payment volume over the last year.

Apple Pay just tripled its payment transactions year over year to 1 billion in Apple's last quarter. Last year, Apple launched its own P2P service called Apple Pay Cash. The iPhone maker has 1.3 billion active devices around the world (as of the fiscal first quarter 2018), which has helped it quickly catch up to PayPal's customer reach. One analyst estimated the number of users on Apple Pay to be 253 million; right in line with PayPal's 254 million.

PayPal is thriving in the face of greater competition

Even with all of this competition, PayPal seems to only be getting stronger. Its customer base grew 15% year over year in the third quarter, which is an acceleration over the year-ago quarter's 13% growth rate.

In addition, PayPal's customers continue to use their accounts more and more frequently. Over the last year, customers have used their accounts an average of 0.7 times per week; that's up 9% year over year, representing a slight acceleration over the year-ago quarter's 8% increase.

PayPal is a buy

PayPal's recent performance clearly shows it's not going anywhere. Apple Pay, Zelle, and other digital payment providers will grab their pieces of the pie. But remember, the global mobile payments market is expected to reach a massive $4.6 trillion in the next five years, according to Allied Market Research. No single company is going to be able to grab all of that.

PayPal is as well positioned as any company to benefit from e-commerce, which makes the stock a buy in my book.