Shares have spiked and plummeted this year as Fitbit tries to find its bearings.

Fitbit (FIT) investors have been on a wild ride so far this year, with the wearable tech company's share price gaining about 30% between January and early June. However, all of those gains slipped away in the following months, and the share price is down about 1% so far this year.

Fitbit's share-price volatility can be traced back to a handful of things, including investor optimism for the company's new Versa smartwatch and a research report claiming investors were missing out on the company's real potential. However, that optimism was later met with investor skepticism that has left the company's share price relatively flat compared to the beginning of the year. 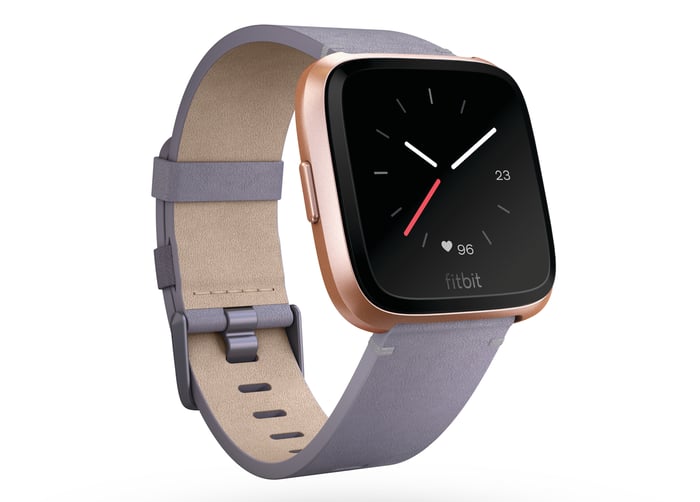 Fitbit's share price gains in the middle of the year came after the company said that sales of its latest device, the Versa, reached 1 million less than two months after its launch, making it the company's fastest-selling device to date.

With Fitbit Versa, we are delivering on our promise to offer a true mass appeal smartwatch with engaging new features. The positive response to Versa shows that we are filling this void and well positions us to gain share of the fast-growing smartwatch market.

Shares spiked about 15% in the five days following the announcement and continued to move up after Citron Research released a report saying that the company was "one of the most under-appreciated med-tech stories in the market." But Citron's dubious report appeared to be mostly just hype, and it even claimed that the company could become a potential acquisition target for Alphabet's Google.

Investors seemed to cool to both the Citron Research report and news of the Versa sales by mid-June, as shares began crashing back down heading into July.

The one bright spot for Fitbit investors toward the end of this year was a surge in the company's share price following the release of the company's third-quarter results. Fitbit made some deep cuts to spending to boost its bottom line, and investors were also pleased to see the company's sales increase for the first time in two years.

Fitbit's management said that company is the No. 2 smartwatch maker in the U.S., after having just entered the market 14 months prior. Fitbit's smartwatch sales now account for 49% of the company's top line, and average selling prices for the devices were up 3% year over year in the third quarter.

This bit of good news helped push the company's share price up from a loss of 20% in 2018 to the current loss of about 1%.

I wrote at the end of 2017 that I didn't think Fitbit would fare very well in 2018, and unfortunately for Fitbit and its investors, that's been mostly true. I still don't believe this company will be able to take on Apple in the smartwatch space, no matter how great its products are, and it's already suffered in the lower end markets as companies in China have flooded the market with inexpensive devices.

Fitbit may have the No. 2 smartwatch on the market right now, but being second behind Apple isn't exactly a great place to be. Apple's massive cash hoard, vast ecosystem of apps and developers, and strong brand loyalty are huge moats that I don't think Fitbit can overcome.

Perhaps the company can compete, as it's already beginning to do, in the health sector, but I'm still skeptical that this avenue will be enough to keep Fitbit growing. Former rival Jawbone talked a lot about its pivot to wearable medical devices as its business began to unravel, and while Fitbit isn't in the same place as Jawbone was, I'd be concerned if the company was focusing too much attention on the niche medical tech market.

As with 2017 and now 2018, investors can likely expect volatility from Fitbit in 2019. The company may be hitting its stride in the smartwatch space, but investors are taking a leap of faith if they're betting on this company right now.