Bombardier (OTC:BDRBF) is shedding much of what remains of its troubled commercial aerospace business, with plans to focus instead on its rail and corporate jet operations. But the company's latest results show that selling off aviation units won't be a panacea, suggesting there is still significant work to be done to fix one of Canada's best-known industrial names.

Shares of Bombardier are down more than 50% over the past five years, and off 27% year to date, as the company has worked to navigate a complex restructuring of its commercial aerospace unit. Bombardier in recent years received billions in subsidies from Canada's national and regional governments to try to get its CSeries passenger jet program flying, resulting in a bitter dispute with Boeing that nearly spiraled into a full-fledged trade war. 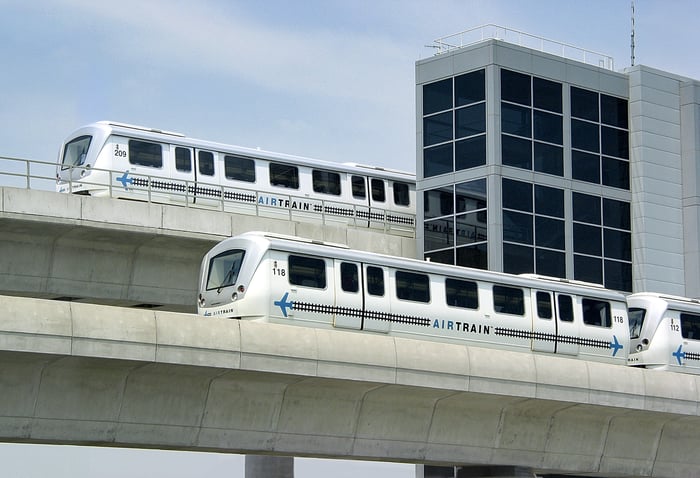 Bombardier last October agreed to hand over control of the CSeries to Boeing arch-rival Airbus, and on Nov. 8, it said it would sell its Q400 turboprop line to privately held Viking Air for net proceeds of about $250 million. Earlier in the year, the company had announced a deal to sell the factory where the Q400 is built for $635 million.

The company is also selling its business jet training program to CAE and cutting 5,000 jobs, or about 7% of the total workforce, to streamline operations. That's on top of more than 7,500 job cuts announced in 2016.

While many investors had expected that a Q400 sale was in the works after the factory deal was announced, Bombardier's quarterly financial review was a disappointment. The company said it would reach its goal to generate break-even cash flow in 2018 only by tapping the proceeds from that factory sale. The company reported an outflow of $563 million in the quarter, well above expectation for about $200 million.

The reason for that miss was not aerospace, but rather higher-than-expected working capital needs in its rail division. In theory, Bombardier will be able to recoup some of that extra capital when the orders are complete and payment is received, but the company also told analysts that its goal for 2019 cash flow is also break-even, plus or minus $250 million, which was also short of expectations.

Cash flow is watched carefully at Bombardier because the company had about $9.5 billion in debt as of Sept. 30. The company has time, with its next major debt maturity not scheduled to come due until March 2020, but at some point, it has to show investors it is generating sufficient cash to cover debt repayments and operations.

On its call with investors following the report, Bombardier noted that some of the cash-flow bleed in 2019 is related to restructuring efforts, and it should be a one-time occurrence, suggesting that it could get to cash-flow positive in 2020 as that restructuring comes off the books.

Is the rail unit on track?

The real question for Bombardier investors concerns the health of the businesses that will remain when the restructuring is complete. The business jet market, which has been in a near-decade-long slump, seems to be slowly gaining momentum, and Bombardier has a refreshed product line ready to sell into that recovery. But the company's massive transportation unit, with its $34 billion backlog, is murkier.

Bombardier said the rail issues that have sunk cash flow in 2018 related to a handful of big contracts that were pushed back due to issues involving customer readiness to accept delivery, as well as a corresponding delay in booking follow-on servicing work related to those orders.

However, on the call, Bombardier management was peppered with questions from analysts seeking clarity on whether the company expects to eventually recoup all of what was lost in 2018. Bombardier appears to be projecting a $600 million cash shortfall from transportation relative to expectations, but it seems to only be counting on $300 million to $400 million of that total being recovered next year.

That could just be the result of costs associated with delivery delays, and a reflection of what a competitive market rail is. It could also be because of Bombardier's likely reluctance to seek penalties or other compensation from customers. Or it could be an early warning sign. If nothing else, it seems wise to take a wait-and-see approach to rail instead of just assuming that results will improve by 2020.

There is a lot to like about Bombardier, with its Global 7500 business jet recently certified and ready to sell into what should be a growing market, and transportation with its steady backlog. The company's third-quarter adjusted earnings actually beat estimates by $0.02 per share, and Bombardier reported a healthy book-to-bill of 1.2 times for business jets and nearly 1 times in transports.

The company still has some levers to pull -- notably a potential sale or investor in its CRJ regional jet program -- and after its recent sell-off, the market currently assigns Bombardier an enterprise value just 0.78 times annual revenue. This could turn into a chance to get in early and on the cheap.

Still, given how long this drama has played out, and the uncertainty that still hangs over transportation, this is one best watched on the sidelines. Now is not the time to jump on the Bombardier train.