Please ensure Javascript is enabled for purposes of website accessibility
Log In Help Join The Motley Fool
Free Article Join Over 1 Million Premium Members And Get More In-Depth Stock Guidance and Research
By Travis Hoium – Nov 18, 2018 at 9:31AM

After a short absence, the sport will soon be back at Wynn Resorts.

A lot has changed for Wynn Resorts (WYNN 2.21%) since Steve Wynn stepped down and sold his shares in the company earlier this year. New CEO Matt Maddox canceled a multibillion-dollar high-rise development in Las Vegas and promised to spend more time expanding in Asian markets like Macau and potentially Japan (if it can get a gaming license there).

Fast forward to today, and Las Vegas plans have been scaled back even further. The lagoon and entertainment complex that was supposed to accompany a new 400,000 square-foot convention center has been canceled, and the shuttered golf course will be reopened. Golf is back on the Las Vegas Strip. 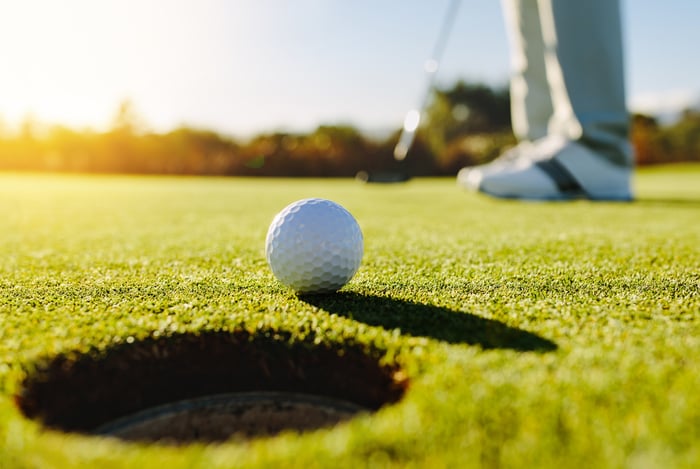 Golf was a surprisingly big win for Wynn Las Vegas

Despite being fairly expensive at $350 to $500 per round, golf was never a major moneymaker for Wynn Las Vegas. It was more of a luxury for the resort and a great visual for guests whose rooms overlooked the course. Or so we thought.

In its third-quarter conference call, Wynn Resorts' management indicated that the golf course was driving more business than originally thought. Maddox said this when discussing reopening the course:

It's a great amenity for the resort. We actually, not only did we notice we lost 16,000 rounds of golf out there, 70% of which were cash, but we lost probably $10 million to $15 million worth of domestic casino business, people coming in for golf trips, they have decided to go elsewhere.

Given the value the course brings and the uncertainty in valuing the lagoon addition, Maddox and team have decided to redesign the golf course to work around the new convention space and move new amenities across the street.

So what we've done is we actually went back and re-engaged Tom Fazio, who is the original designer of our golf course, to come in and take a look at the couple holes that were disrupted by this 400,000 square-foot convention center, and see if we can design a new 18-hole golf course connected to Wynn in Encore and have that back in action before our convention center opens. The design of that is complete, the work has commenced, and the golf course will be restored and back in action by this time next year.

Golf is going to be back at Wynn Resorts.

Land is no longer the problem

What really changed the calculus for Wynn Resorts and golf was the acquisition of 38 acres of land across the Las Vegas Strip late in 2017. Now, the development that was expected to go into the golf course, like a new hotel tower, convention space, and more entertainment, can go into the 38-acre site directly on the Las Vegas Strip. Maddox said:

It'll take quite a while to see the construction of this new project for Wynn Resorts, but management expects to take back some near-term business as it builds out a long-term strategy to drive growth on the Strip.

Returning to its roots

The golf course was always a unique feature at Wynn Las Vegas, and it'll be back up and running sometime in 2019. The impact may be $10 million to $15 million immediately, and the company doesn't have to give up development space given the expansion land it has across the street.

Considering the cost and risk associated with building a new tower and a lagoon feature that's never been tried on the Las Vegas Strip, going back to golf seems like the right move for Wynn Resorts. And it could be a short-term and long-term win for the company.