When investors accorded Calif.-based Rocket Lab a $1 billion valuation last year -- before the company had even sent one single rocket to space -- I admit that I had my doubts. Was this company really worth all that its investors were paying for it?

But give credit where credit is due. Rocket Lab isn't sitting on its laurels (or its cash). Rather, it is deploying its cash to cement its lead at the head of the pack of "new space" companies -- and raising even more cash to capitalize on its accomplishments and expand its lead over its rivals. 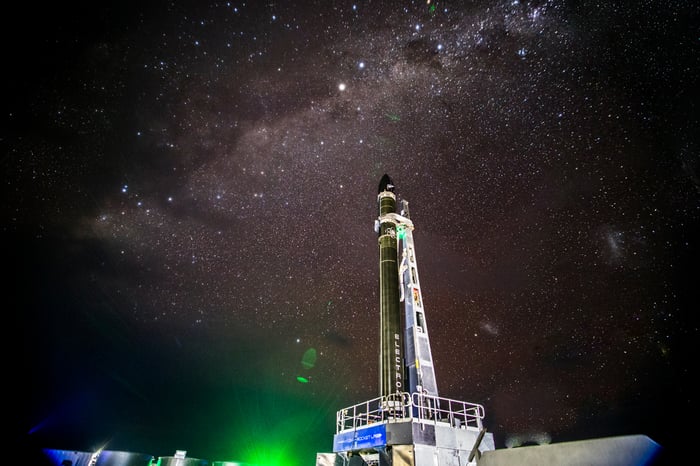 As of March 2017, Rocket Lab had raised $148 million in private funding from backers including Khosla Ventures, Bessemer Venture Partners, and Lockheed Martin -- more money than any of its small-rocket-building rivals had managed to amass from outside investors. (Though certain rivals, such as Blue Origin, have something of an ace in the hole when it comes to raising cash.) Just this past week, however, Rocket Lab nearly doubled its cash warchest in one bold move, announcing a fifth round of funding that brought in an additional $140 million.

Rocket Lab played it coy as to the precise "valuation" of its latest private placement, saying only that it is "soaring past its previous $1 billion-plus ... valuation." Rocket Lab was less shy, however, in describing how it plans to use all this cash. The new money, says founder and CEO Peter Beck, "enables the continued aggressive scale-up of Electron production to support our targeted weekly flight rate [of up to 52 rockets per year by 2020]. It will also see us build additional launch pads and begin work on three major new R&D programs."

But what is Rocket Lab spending its money on specifically? Rocket Lab currently launches its nine-engine, 56-foot-tall Electron rockets out of Launch Complex 1 on New Zealand's Mahia Peninsula. Last month the company signed a deal to build a "Launch Complex 2" at NASA's Wallops Island facility in Virginia. This site, with an estimated start-up cost of $20 million, is expected to become operational sometime next year, roughly doubling the rate at which Rocket Lab can launch rockets.

And Rocket Lab has plans to double again, opening as many as two more launch sites in future years in the UK and Asia. And where will Rocket Lab be building all these rockets -- and can it build enough of them to supply a launch rate of 52 rockets per year?

The answer to both questions lies in Rocket Lab's new Australian digs -- a brand new 80,000-square foot assembly plant located just outside Auckland, New Zealand, according to the New Zealand Herald. The company has even installed a new Mission Control Centre capable of remotely running launches out of both LC-1 in NZ, and also LC-2 at Wallops once that site is up and running.

Combined with the company's existing engine factory located just outside of Los Angeles, Rocket Lab now has more than 190,000 square feet of factory space. That's just a fraction of the square footage of more established SpaceX, or even fellow space start-up Blue Origin. But Rocket Lab says that, combined, the new factories should support a production rate of at least 52 rockets per year.

The company is also hiring rapidly to staff its new sites. Payroll has nearly doubled to 330 employees over the past year, and is moving toward a targeted 500 employees a year from now.

Rocket Lab founder and CEO Peter Beck says there's a "pipeline" of 2,600 small satellites that various companies have announced plans to launch over the next four years, necessitating a rapid ramp in the production of rockets (both Rocket Labs' and others') to put them in orbit.

For the most part, these will be much smaller rockets than incumbent launch providers such as SpaceX, Ariane, and United Launch Alliance are used to launching -- and that's OK. Space market research firm StratSpace believes that over the next five years the majority of satellites going up will be "small missions and small spacecraft" -- the exact kind of missions that Electron's 150 kilogram-to-225 kilogram payload Electron rockets are designed to support.

Rocket Lab's goal in expanding so rapidly is to grab as large a share of this market as possible before rivals bring their own launch systems online. The company will also want to quickly prove its ability to provide flexible launch dates and tailor-made orbits for its customers so as to differentiate Rocket Lab's offerings from "ride-share" arrangements that the incumbents offer, in which small satellites get shoehorned onto missions mainly designed to launch big rockets. The more user-friendly Rocket Lab's services appear, the better the chance the company will be able to steal business away from its larger (and often publicly traded) competitors.

To further this goal, Rocket Lab hopes to launch 16 commercial missions in 2019, and to be launching rockets weekly by the end of 2020 -- aspiring to have 52 launches a year. (For comparison, SpaceX has launched 18 rockets in 11 months so far this year, with four more launches planned before the end of the year.)

Rocket Lab's Beck predicts that out of the dozens of start-ups currently vying to create new small rocket launching systems, only two or three players will ultimately survive. Rocket Lab's taken an early lead in this race. With some of the best financial backing in the field and a 100% record of success in its first three launches, I'd bet on Rocket Lab being one of the survivors.

Why Uber Stock Was Climbing Today