Automating the trucking industry and allowing companies to pay to shuttle customers to their stores could help drive Waymo's business.

In just a couple of months, Alphabet's (GOOG 1.66%) (GOOGL 1.77%) driverless-vehicle company, Waymo, will launch its first commercial autonomous-vehicle service to the public. Investors have known for a while that this has been Waymo's goal. But at the recent WSJ Tech D.Live conference, Waymo shed more light on two areas that the company thinks it'll benefit from.

Waymo CEO John Krafcik said that the trucking industry would be one of the first areas where the company will make money from its technology. Additionally, Krafcik said that allowing companies to pay for rides to bring customers to their stores could potentially be a significant source of income for Waymo.

With the company poised to launch a commercial version of its autonomous-vehicle services by the end of this year, let's take a look at why these two opportunities could be so crucial to Waymo. 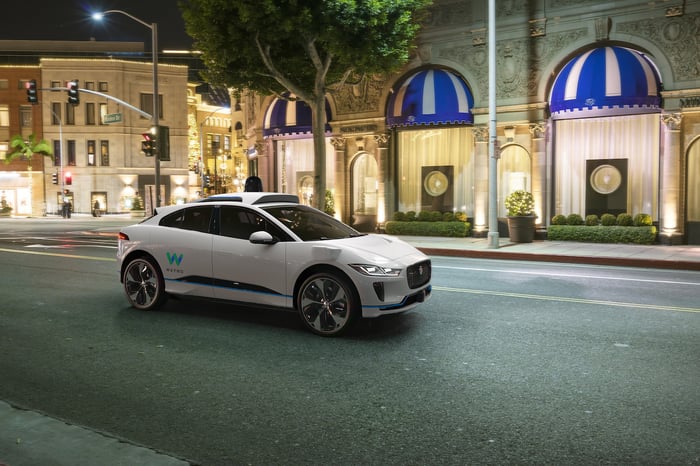 Why Waymo cares about trucking and free rides for customers

Let's start with Waymo's opportunity in trucking. The company has already been testing autonomous trucks in California, Arizona, and Georgia. Referring to the trucking industry, Krafcik said that "you could anticipate a material contribution to the world from Waymo over the next couple years."

He mentioned that the U.S. has a shortage of 50,000 truck drivers right now, and that in the next several years that figure will jump to 275,000. In a blog post earlier this year, Waymo said that its autonomous-vehicle technology is adaptable from cars to trucks, and that its semitrucks have the same custom-built sensors and self-driving software used by its minivans.

Waymo's autonomous trucks could help fill the gap between trucking demand and the shortage of workers. The company would benefit by licensing its technology to truck makers and transportation companies; that would help Waymo tap into the growing autonomous-trucking market, which is forecast to grow to nearly 82,000 trucks worldwide by 2030.

Perhaps even more importantly, Krafcik told The Wall Street Journal that companies have expressed interest in paying Waymo to bring customers to and from their stores. The CEO said about this business model: "This is a whole other channel of demand we really hadn't thought deeply about that could end up being a really significant driver of business."

That's important to note, because Krafcik said Walmart, already a partner of Waymo, has expressed interest in using Waymo in this way. Clearly, getting a retailer the size of Walmart to pay for riders to get picked up and dropped off at its stores could be an easy way to sell users on the service once it launches.

Additionally, many initial valuations of Waymo's business haven't included the idea of businesses paying for customers' rides; this could potentially boost its value. For example, Morgan Stanley estimated that Waymo's robotaxi service would be worth about $80 billion by 2040, based on a fleet of 16 million autonomous vehicles charging $0.17 per ride. But factoring in this additional revenue potential of companies paying for rides, Waymo's services could surpass some preliminary forecasts.

Why Waymo's moves matter for investors

Alphabet's Waymo has tested its vehicles on 10 million miles of real roads and has simulated another 7 billion virtual miles. Now it's on the verge of launching one of the first ride-hailing services to use self-driving vehicles. Clearly, the company is in a unique position to benefit from autonomous vehicles. While other tech companies and automakers are figuring out their self-driving car strategies, Waymo is forging ahead.

Waymo could be earning money from its services very soon, but keep in mind that it will likely take some time before the company earns enough to be more than a blip in Alphabet's nearly $111 billion in annual revenue (in 2017).

Waymo is at the forefront of an entirely new market that's still hard for many investors and consumers to get their heads around. Intel says that self-driving vehicles will create a massive $7 trillion passenger economy by 2050 as automakers, tech companies, and other businesses create vehicles and services we've never seen before.

As that market begins to take shape, Alphabet's Waymo is perfectly poised to benefit from licensing its technology to automakers eager to dive into autonomous vehicles, as well as from its own ride-sharing services. And with Alphabet's stock recently dipping 16% over the past three months, investors who are looking to snatch up shares at a bit of discount may want to consider jumping in now.