iQiyi is well off the highs it hit this summer, but it's still up double digits in a year that's been turbulent for Chinese tech stocks.

iQiyi (IQ -1.85%) was spun off from Chinese search giant Baidu earlier this year and had its initial public offering on March 30. Shares were priced at $18 for their market debut, but fell to roughly $15.50 in their first day of trading. 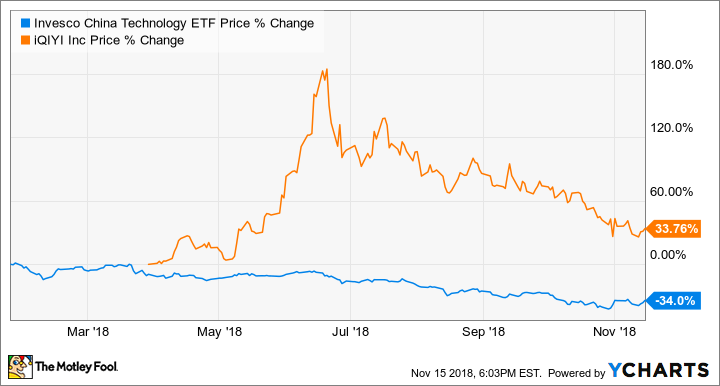 The stock now trades up roughly 17% from its IPO price and 34% from the closing price on the day of its market debut. The company's gains year to date stem from optimism for streaming video services in China and the company's impressive sales growth. However, rising content costs and mounting losses have also caused the stock to trade well off the highs it hit this summer. 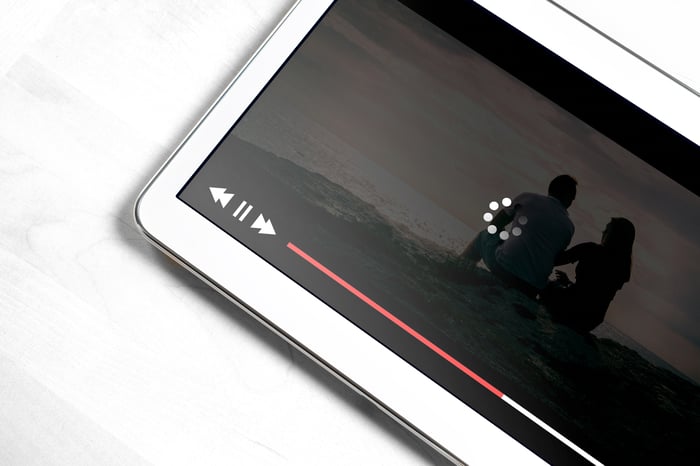 A string of big announcements

iQiyi stock gained ground after the streaming video company published first-quarter earnings results on April 26, and shares continued to climb in the next two months on the heels of a string of promising content announcements. The company's first quarter saw it record year-over-year sales growth of 57% to reach roughly $778 million and post a net loss of roughly $68 million.

The month of May saw the company announce new content deals with FilmNation, secure the first operating license of its class for its digital-rights management system from a government-affiliated regulator, and garner a bevy of nominations for prizes at the Shanghai International Film Festival.

Promising news continued in June, with the company publishing a press release revealing that its show Hot Blood Dance Crew had set streaming records in China, with the season's finale generating 1.8 billion views and hitting new highs for biggest sponsorship received and fastest-selling ad spots for an online variety show. The company also revealed in June that it had added the rights to professional golf's four major men's tournaments to its existing lineup of golf content. That made it the top carrier of live-streamed golf coverage in China and signaled ambitions to become a bigger player in the valuable live-sports category.

With a string of big announcements following the first quarter's impressive sales growth, iQiyi stock continued to gain ground. Shares then peaked at roughly $46 per share, and have traded lower in conjunction with sell-offs for the broader Chinese technology sector, rising concerns about threats from competitors like Tencent and Alibaba, and second- and third-quarter earnings reports that arrived with rapidly expanding losses.

iQiyi published its second-quarter results on July 31, delivering 51% year-over-year sales growth to reach $932.5 million. However, the company's net loss also more than doubled to reach roughly $317 million. Shares sold off following the second-quarter earnings release. And they continued to trend down over the next several months as the Chinese tech sector moved further into bear territory and the possibility of a sustained trade war between China and the U.S. added to concerns that China's fast-growing economy might be cooling.

The streaming video company then reported third-quarter earnings results on Oct. 30, once again delivering big sales growth along with the bitter pill of expanding losses. iQiyi's revenue for the quarter including September  rose 48% year over year to reach roughly $1 billion, and was driven by strong growth for its premium membership services. But its net loss nearly tripled versus 2017's third quarter and came in at a whopping $457.3 million. The stock once again lost ground following its earnings results.

The outlook for iQiyi

iQiyi is spending big to add content that can attract paying members to its platform and build a user base that serves as the foundation for future growth. However, the company will have to show that it can get its losses under control and begin steering the business toward profitability. For now, the big losses aren't necessarily a dire sign, but that type of performance won't be sustainable and needs to be backed up with new subscriber additions and content wins.

The hope is that China's large and still-growing population of internet users will allow the company to continue expanding its membership rolls -- and that long-term growth for middle-class discretionary spending will enable the company to increase its average revenue per user through pricing hikes and value-added services. Management also sees big growth opportunities as it pursues a Disney-like model that will see increasing contributions from sales channels like merchandise licensing and video games.

The company counted 80.7 million paid video subscribers at the end of September, up from roughly 50 million subscribers at the beginning of 2018 and just 5 million paying subscribers in May 2015. For the December quarter, iQiyi is guiding for sales between $943.5 million and $982.8 million, representing roughly 46% year-over-year growth at the midpoint.