One piece of news that got lost in the shuffle of the recent market sell-off and Activision Blizzard's (NASDAQ:ATVI) third-quarter earnings report was that Blizzard's digital card game Hearthstone has surpassed 100 million registered players. The last time the company disclosed the size of the game's player base was in May 2017 when there were 70 million registered players. Management credits the launch of the game on mobile devices a year ago for bringing in new players.

The news that Hearthstone is still attracting millions of new players is noteworthy given that the company's much publicized titles like Overwatch and World of Warcraft haven't seen significant increases in their respective player bases lately. Hearthstone is not a game that gets a lot of attention by investors, but it's one of the crown jewels of the Blizzard segment, and it could have big esports potential over time. 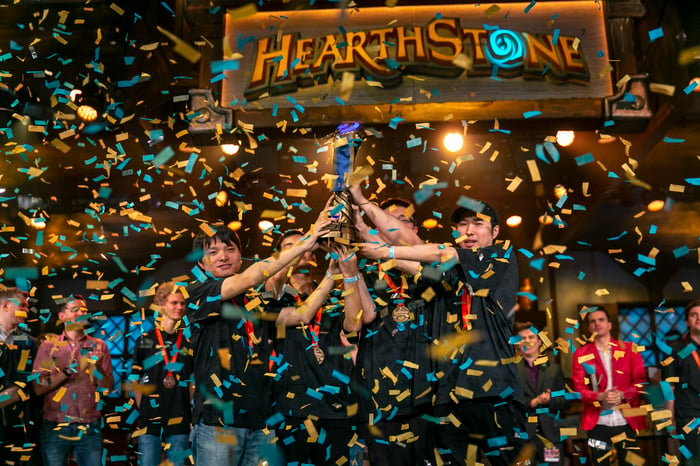 Overwatch was designed with esports in mind, and it will remain the company's flagship esports title for now. But Activision has several games that draw a large audience of spectators on Twitch (the game streaming site owned by Amazon.com where people watch others play video games). Management believes this highlights the broad appeal of its games on the esports scene.

Overwatch League was an ambitious and successful first step for the franchise in the esports market -- a market that could triple in size to $3 billion over the next five years, according to Goldman Sachs. Management plans to take the infrastructure and expertise they have gained from launching Overwatch League and use that to launch other esports initiatives.

In Activision's third-quarter earnings report, the company said that it is "actively advancing how the Overwatch League model and infrastructure will be applied to Call of Duty and other franchises."

In his 2017 annual letter to shareholders, CEO Bobby Kotick said, "Over time we believe our esports initiatives could rival traditional sports for audience interest, advertisers, sponsors, ticket sales and merchandise sales (both virtual and physical)."

Hearthstone is one game that could play a role in the company's esports ambitions.

What you need to know about Hearthstone

Hearthstone has not been one of the company's top moneymakers. Over the last few years, Call of Duty, Overwatch, World of Warcraft, and Candy Crush have been the game maker's cash cows, bringing in about two-thirds of annual revenue.

One reason Hearthstone doesn't generate as much revenue is that it's a free-to-play title. Hearthstone makes money from players buying digital card packs in the game.

It's a good business strategy because the point of the game is to collect a deep roster of cards that can wield special abilities when played in a match. The better your deck of cards, the better chance you have of winning. Plus, the margins are likely very high since selling digital cards doesn't require the high costs that are associated with developing a new game.

Every Hearthstone card is part of a set that the company releases periodically. These sets are sort of the equivalent of game expansions that the company releases for World of Warcraft every two years. There are fan websites, third-party software, and Hearthstone wikis all over the internet devoted to the topic of collecting Hearthstone cards. Die-hard players can easily spend up to around $1,000 over a few years buying cards, although cards can be unlocked for free if players put enough time into playing the game.

If the company cranks up the franchise for the esports market, that would obviously create an additional incentive for hardcore players to buy more card packs and practice their skills.

One of the most watched games

Hearthstone has been very successful as a casual game for the masses, but there's a great deal of potential for this game to grow. The esports scene will likely be a key growth outlet. Hearthstone is consistently ranked among the top 10 most watched games on Twitch. In October, for example, people spent 22 million hours watching others play the game.

More eye-opening was that people spent more hours watching the Hearthstone World Championship in January on Twitch than the Overwatch League Grand Finals in July. Overwatch League was the hottest esport event in 2018 and drew a sold-out crowd at Barclays Center in Brooklyn for the championship match. Judging by Twitch viewership, Hearthstone seems to have at least as big a draw as Overwatch on the esports stage.

The key difference between the two games is that Overwatch is a team-based game with a lot of fast-paced action that gives spectators a similar thrill to watching a traditional sport. On the other hand, Hearthstone is just two players playing cards on a screen. The excitement of an Overwatch competition makes the team-based shooter more marketable, which is likely why the company has put more investment into Overwatch League instead of building a Hearthstone league.

Still, the hours watched on Twitch and the growing player base indicate Hearthstone is a sleeping esports giant.