These green energy industry companies could be worth a look this month.

As the turkey leftovers get eaten, the weather gets colder, and the holiday shopping season starts picking up, it's a great time to think about... renewable energy stocks?!

Actually, with much of the market's attention focused elsewhere, November is a great time to keep an eye out for bargains in the green energy industry. We asked three of our Motley Fool contributors what renewable energy companies they'd recommend watching this month, and they came back with Vestas Wind Systems (VWDRY 3.01%), SunPower (SPWR -4.65%), and NextEra Energy Partners LP (NEP -0.67%).

Here's why they think you should take a break from reheating those turkey leftovers and check out these companies.

The wind's picking up

John Bromels (Vestas Wind Systems): Wind energy stocks have had some turbulent times in recent years, because of price pressures resulting from the easing of government subsidies and a highly competitive sales environment. But things may be turning around for the industry, which should benefit the world's largest manufacturer and installer of wind turbines, Danish company Vestas Wind Systems. 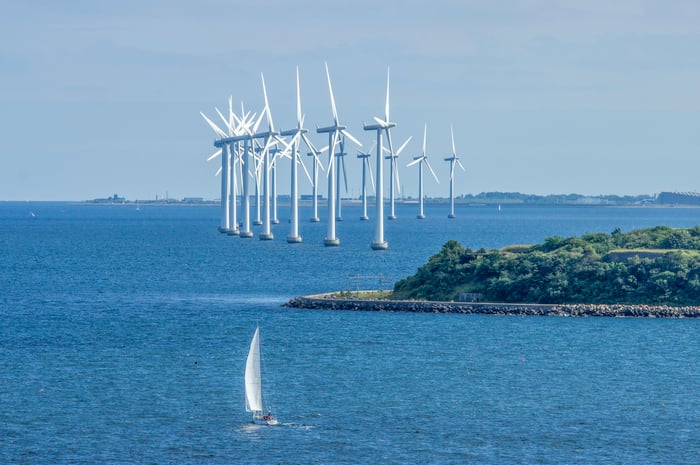 Top renewable energy stocks can be a valuable asset to your portfolio. Image source: Getty Images.

Although Vestas recently put out an underwhelming Q3 2018 earnings report, CEO Anders Runevad was very clear that he expected things to turn the corner in 2019. "We expect 2019 activity level and revenue to increase compared to 2018," he stated on the earnings call. Other wind turbine manufacturers have been similarly upbeat about the coming year, with Vestas' main rival, Siemens Gamesa, predicting a 10% increase in sales in 2019.

There were signs of this even in the company's lackluster Q3 results. Orders for wind turbines rose 25% in the quarter to 3,261 megawatts (wind power sales are often recorded by the amount of energy the order will generate rather than the number of turbines sold). Although that was slightly below analysts' expectations, it did bring Vestas' order backlog to an all-time high.

Given the upbeat outlook for the industry as a whole -- and Vestas' in particular -- now looks like a good time to consider picking up some shares.

Where is solar energy going?

Travis Hoium (SunPower): SunPower is one of the few renewable energy companies that gives investors a look at multiple segments of the market. The company is a leader in residential solar and energy storage while also participating in large power plants. And like most companies in solar, SunPower struggles to make money in a competitive environment -- the next few quarters will be telling for whether the solar industry is on the way up or down.

The first thing for renewable energy investors to watch is power plants. In the last three quarters, SunPower's gross margin on power plants has been negative 14.1%, 0.6%, and 2.1%, showing some of the pressure utility-scale solar plants are under. As long as SunPower is losing money in power plants, it'll be a tough business for the entire industry.

Residential solar is the opposite end of the spectrum for SunPower, with margins in the high teens and low 20s. The company's X-Series solar panel is the highest-efficiency solar panel on the market, commanding a premium to competitors, and if it continues to gain market share and drive better margins, it will give an indication of a positive environment for residential solar as a whole.

In energy storage, SunPower is a leader in commercial energy storage with about 35% attach rates to new projects, but storage is a relatively small business overall. It's so small that SunPower doesn't even break out how much revenue storage generates. If energy storage grows in commercial projects and begins to attach more to residential solar projects, it could open up growth avenues for companies like Vivint Solar, Sunrun, and SolarEdge, but expect SunPower to be a bellwether for the adoption of energy storage.

SunPower is a solar stock to watch not only because it is an efficiency leader that will tell us if developers value efficiency in solar panels, but because it plays in every major solar market. If it is doing well, then it's likely the industry is doing well. If it's struggling, then the whole industry is struggling, and that's exactly what we've seen so far in 2018.

NextEra Energy Partners expects to continue supplying its investors with high-powered dividend growth in the coming years, with the company currently planning to increase its payout by 12% to 15% annually through at least 2023. Driving the company's growth will be additional acquisitions from NextEra and third parties, as well as expansion projects on its existing assets. The company already has its near-term growth locked up after it made a needle-moving acquisition of some wind and solar assets from NextEra Energy earlier this year while also securing some expansion projects on its natural gas pipelines.

While that fast-growing income stream makes NextEra Energy Partners an attractive income stock to consider buying, I think it's best that investors put it at the top of their watchlist for now. One reason for that view is that shares have surged 20% in the past year, which has pushed its yield below 4%. While that's higher than most stocks, it's not as attractive as some of its renewable peers. That's why I think investors should wait and see if shares give back some of their gains before buying.