Video game retailer GameStop (NYSE:GME) made a surprising announcement last week: It's going to focus more on selling video games, and abandon the distraction of trying to sell cellphones as well.

Abandoning its diworsification strategy -- er, I mean its diversification strategy -- GameStop intends to divest its Spring Mobile business, which owns and operates 1,289 AT&T wireless stores, selling it to Prime Communications, L.P. for $700 million. The deal is slated to close before the end of next month. This news brought a quick reaction from Wall Street, where this morning we see Merrill Lynch announcing an upgrade of GameStop shares -- not all the way to buy, mind you, but at least one step up to neutral. 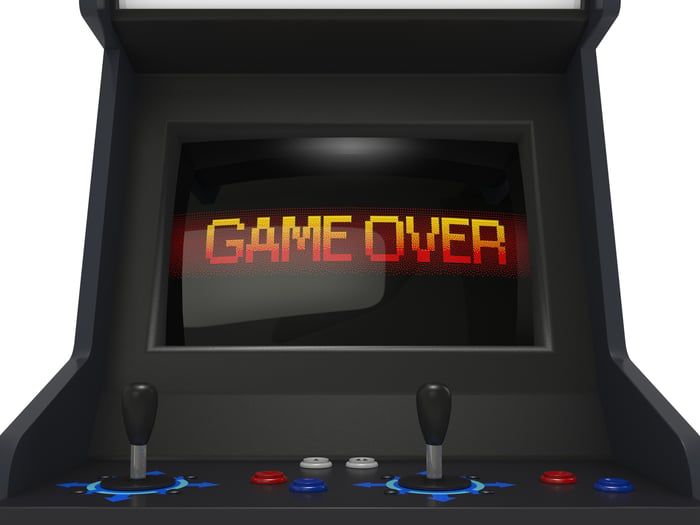 With 25% short interest, is it game over for GameStop? Not so fast, says Merrill Lynch. Image source: Getty Images.

What GameStop will give up

The Spring Mobile business that GameStop is selling to Prime Communications is the largest part of GameStop's technology brands division (the other part being Simply Mac, comprising 48 stores selling Apple products). Technology brands generated only $804 million in sales for GameStop last year -- and $316 million in losses, which may explain why GameStop has decided to offload 96% of its stores.

Although selling Spring Mobile will shrink GameStop's annual revenue by about 8% or 9% (it's not entirely clear what the breakdown in revenue is between the 48 Simply Mac stores and the 1,289 AT&T stores), it should do wonders for GameStop's profitability -- which would have been more than three times higher in 2017 if not for technology brands.

What GameStop will get

And of course, in addition to the boost in profitability, selling Spring Mobile will drop a windfall of cash in GameStop's lap -- $700 million that GameStop says it will use "to reduce the company’s outstanding debt, fund share repurchases, reinvest in core video game and collectibles businesses to drive growth, or some combination of these options."

Why Merrill Lynch thinks this is good news

In today's upgrade, Merrill Lynch focuses on the "capital return" aspects of this use of cash. In general, Merrill "remains negative on fundamentals" of GameStop's game-selling business, reports TheFly.com. (So Merrill isn't too keen on the company's core video game and collectibles businesses.) That being said, GameStop is getting "a significant amount of cash to put toward buybacks."

Indeed, with a $1.4 billion market capitalization, the $700 million GameStop will receive for Spring Mobile essentially converts 50% of the company to cash, while sacrificing only 8% or 9% of the revenue stream to do so. With this cash, GameStop could pay off the majority of its $819 million in debt, giving it a cash-heavy balance sheet. Or GameStop could buy back half its stock, doubling earnings per share through the miracle of stock concentration (which is the opposite of stock dilution).

Either way, earnings at GameStop could surge as a result of this deal, either by unshackling the core business from the money-losing cellphone business, by doubling earnings per share -- or both. And this opens up the potential for yet another benefit for GameStop shareholders, says Merrill Lynch:

Namely, 25% of GameStop's share float is currently sold short. News of a big increase in profits (even if only per-share), says Merrill, could prompt investors who currently short GameStop stock to quickly cover their short positions, potentially creating a short squeeze -- and driving up the price of GameStop stock. So even though Merrill Lynch is not optimistic about the core GameStop business, the analyst is raising its price target on GameStop stock to $16 a share.

Is Merrill Lynch right to do so? Perhaps. I have to say that if, for example, GameStop's sale of Spring Mobile were to add back the $316 million in operating losses the company suffered last year and give GameStop a $450 million operating profit -- well, that would mean GameStop stock is selling for only about three times the annual operating profit of the businesses it will retain, which seems a very cheap valuation.

Granted, these profits are shrinking. Additionally, GameStop's business model of buying and selling used video games appears to be dying in the age of digital game downloads. Still, the price does entice. If Merrill Lynch turns out to be right, and GameStop stock does go to $16, I can't say it will surprise me.

Merrill Lynch is right to think twice about shorting GameStop at these prices. You should, too.