During his years running Danaher, he developed a set of business principles that should serve him well as he sets about righting the ship at the industrial conglomerate.

General Electric (GE 1.19%) CEO Larry Culp arrived at his new job on Oct. 1 with an impressive reputation built up during his long tenure at Danaher (DHR -0.24%). However, given that Danaher is a vastly different entity from GE -- and considering Culp's own admission that he was "really on the periphery" of power and aerospace, GE's future core businesses, at Danaher -- some might question his ability to turn things around at the struggling conglomerate. That said, there's a strong case to be made that Culp is the right man for the job.

By coincidence, Culp was promoted to CEO at Danaher in the same year Jeff Immelt started his 16-year tenure at GE. A quick look at the price charts of their stocks during those years says a lot about the careers of both men.

While it's fair to say Immelt had his fair share of bad luck -- not least the impact of 9/11 on the aviation industry, or GE being underexposed to oil when prices surged between 2000 and 2008 -- it's indisputable that Culp's leadership of Danaher was an unqualified success. 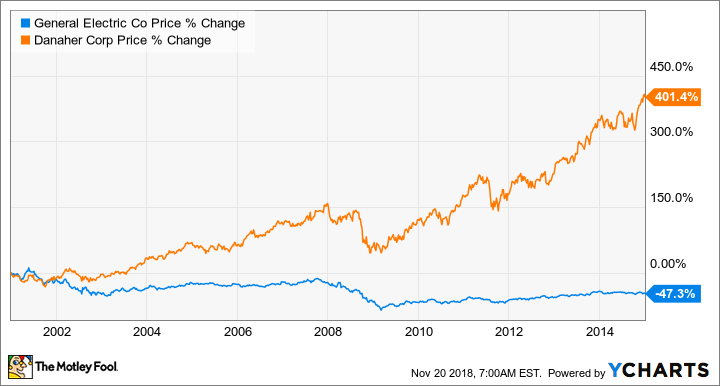 What Larry Culp did at Danaher

One of the big differences between the two men is that Immelt seemed to be in the business of picking winners from a macro perspective. Meanwhile, Culp appears to have followed an acquisition strategy based on picking targets he felt could most benefit from what his company calls the Danaher Business System (DBS). In a nutshell, DBS is a set of core principles embodying lean manufacturing processes and continuous improvement.

So Immelt made some much-criticized acquisitions of oil and gas businesses, as well as the ill-fated purchase of Alstom's power assets. Meanwhile, Culp's quietly accumulated a number of relatively disparate industrial and medical businesses, then applied DBS to their models and successfully improved their operational performance.

In fact, Culp's acquisition strategy created such a disparate collection of businesses that the board decided to split Danaher in two by spinning off the industrial operations into a new company called Fortive (FTV 0.23%). (Rather amusingly, Fortive calls its business system the FBS.)

In sum, the dominant theme of Culp's leadership at Danaher was improving productivity and margins at its existing and acquired businesses -- a sharp contrast to the big picture acquisition strategy followed by Immelt.

A good example of how DBS worked can be found in the 2011 acquisition of Beckman Coulter (medical diagnostics). Within three years, Danaher had removed several management layers and reduced headcount by 8%, while generating more than $300 million in cost savings and cutting capital expenditures by more than 40%. As a result, operating margins increased from 10% in 2011 to 15% in 2014.

At the time Danaher bought Beckmann Coulter, the once highly regarded industry leader had fallen on hard times, and faced regulatory action (in this case, three FDA warning letters). It also had execution issues, and given the dramatic improvements in productivity that Danaher's management later helped it generate, it had clearly not been run optimally. Sound familiar?

The difference the new CEO can make at GE

If Culp is able to apply DBS-like principles to GE, there are clearly opportunities to significantly improve its performance.

Meanwhile, GE is already in process of reducing unit production costs on LEAP aircraft engines at CFM International -- a joint venture between GE and Safran. LEAP production is set to ramp up significantly in the coming years, and cutting production costs there could boost margin at GE Aviation overall. 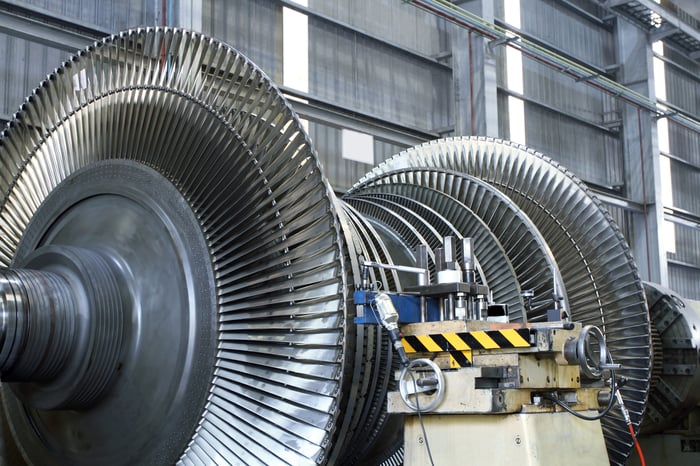 Right now, GE needs to execute better, and improve the productivity and cash flow from its existing assets. Fortunately, this is exactly the kind of strategy that Culp's tenure at Danaher suggests he's highly qualified to deliver.

The financial outlook at GE is far from clear. It's possible that cash calls from variety of sources -- SEC investigations, possible insurance reserve shortfalls, lawsuits, the need to fund GE Capital, etc. -- will constrain Culp's ability to make the structural changes that it needs. But provided the company can muddle through this difficult period, it's good bet that its new CEO will guide it to better performance.