Not a lot has gone right for SunPower in 2018, but there may be signs of life.

2018 hasn't been anything like what SunPower (SPWR 5.47%) hoped for when the year started. Tariffs hit the company early in the year (although an exemption was recently granted), the global solar environment has weakened this year, and company maneuvers led to hundreds of millions in losses.

There are some recent signs that the solar market may be recovering, which is why shares popped on Monday, but there's still a long road back before SunPower's shares will recover the year's losses, and this may be another down year for this solar industry leader. 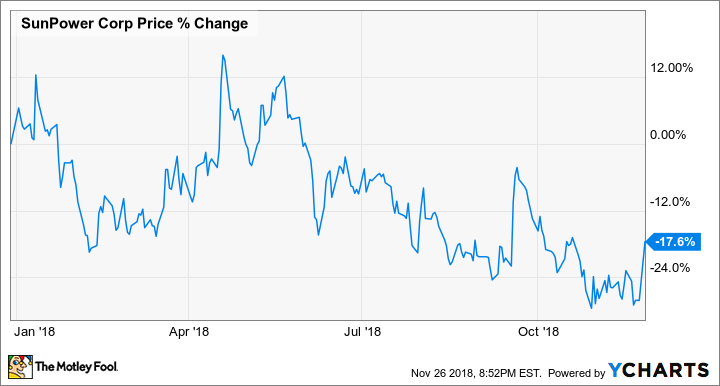 2018 was supposed to be a year when SunPower transitioned to profitability, but that wasn't the case, and asset sales and writedowns are a big reason why. When it reported fourth-quarter 2018 results, SunPower's management said it would sell about 45,000 solar leases as part of a long-term plan to simplify the balance sheet. The move resulted in a $474 million charge on the assets and drove a $568.7 million loss overall. 2018 was off to a rough start pretty quickly.

Results for the second quarter of 2018 included another $369.2 million charge related to writing down legacy manufacturing assets that had become obsolete. This writedown was part of an effort to more quickly upgrade manufacturing to next-generation technology (NGT) solar cells, which are expected to be higher margin and more cost-effective against commodity cells, but the adjustment has been costly in the meantime. 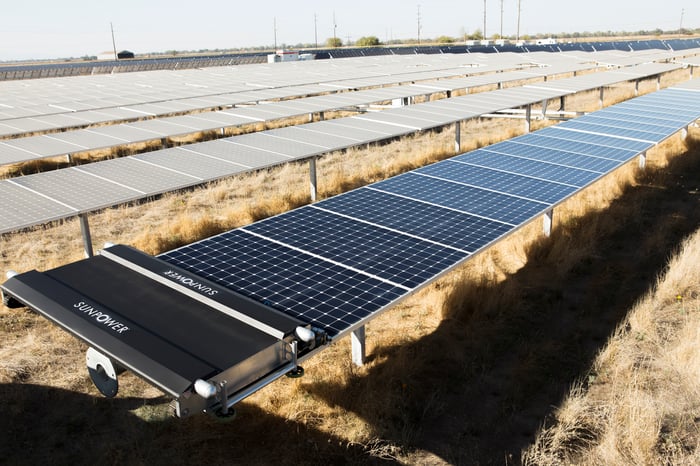 China throws solar for a loop

The biggest global surprise in 2018 was China cutting solar incentives early in the summer. A sharp decline in demand resulted in a sharp drop of about 30% in solar panel prices by late summer. Instead of seeing a record year for global solar installations, the industry will likely shrink slightly, leaving manufacturers to fight over a shrinking pie even as their capacity expands.

Over the long term, supply and demand will level out, and we're already seeing a rise in global solar panel demand now that prices have declined. But the increase in volume will be offset by lower prices, making it tough for even the most efficient solar panel manufacturers to make money.

Bright spots to end the year?

2018 may be a rough year for SunPower, but the company may be seeing some of its best markets starting to improve. Thirty-five percent of recent commercial systems have been booked with energy storage, adding another source of revenue and value creation to the company's offerings. Expect residential energy storage to start to be a growing portion of sales in 2019.

In the residential business, non-GAAP gross margins have been over 16% in four of the last five quarters and should trend higher as NGT solar panels are rolled out in 2019. Over the long term, management has targeted gross margins in the mid-20s, or higher, for residential solar, which could significantly improve profitability.

The P-Series solar panels aimed at the power plant business (think utility-scale installations) are also expected to reach a scale of 2,000 megawatts in 2019, which could drive revenue growth. This won't be a high-margin business like residential solar, but if it contributes anything to the company's margins it would be an incremental positive compared to the money-losing power plant business of the last few years.

SunPower continues to sell assets to simplify its balance sheet and spend money on upgrading manufacturing capabilities. These moves should help make the company more profitable in the long run, but it could be years before investors see a consistent profit. That's the reality of the solar business, especially after a rough 2018.