Nearly 10,000 baby boomers turn 65 every day, a trend expected to persist until 2029. Considering that age and healthcare costs are positively correlated, it's natural to feel bullish about the future of the healthcare sector.

Intuitive Surgical (NASDAQ:ISRG) and Johnson & Johnson (NYSE:JNJ) are two healthcare giants that look poised to ride the megatrend of increased medical spending for years to come. Which company is the better buy? 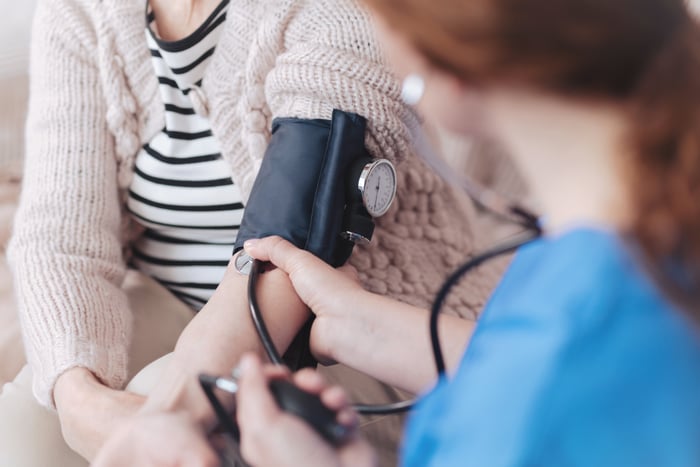 The bull case for Intuitive Surgical

Intuitive's da Vinci system has been the gold standard in robotic surgery since it launched nearly two decades ago. Demand for the company's da Vinci system took off soon after it was launched and an utter lack of competition allowed Intuitive to dominate for years. That fact remains true today even as competition is finally starting to heat up.

Intuitive's razor-and-blade business model has ensured that its financial statements have prospered alongside the growth in robotic surgery. The company earns a bunch of money up front when it sells a da Vinci system to a customer. They also pull in high-margin recurring revenue from instrument and accessories sales as well as from an annual service contract.

A closer look at the company's recent da Vinci sales shows that demand remains as strong as ever. Placements grew by 31% in the most recent quarter thanks to its unique trade-in program and its leasing model. International expansion is also growing like gangbusters, especially in Asian markets like Japan.

Sales of the company's consumable instruments, accessories, and service agreements are also growing rapidly. Procedure growth remains in the double-digits thanks to strength in hernia repair, colorectal procedures, and general surgery.

The increased scale is helping the company generate healthy margins and higher profits. Intuitive's adjusted profits expanded by 33% last quarter, which is a compelling growth rate.

Moving forward, investors should expect continued prosperity as its new da Vinci SP (Single Port) system gains traction. This system allows surgery to be performed with just a single incision into the body, which is a highly appealing option for patients.  The company's new Ion diagnostic platform, which allows for minimally invasive biopsy in the peripheral lung, was recently submitted for regulatory review and represents more potential growth.

Wall Street expects that Intuitive's profits will grow by more than 15% annually for the next five years. While the company's valuation certainly reflects that optimism, shares currently trade around 40 times forward earnings. Bulls have consistently been rewarded for betting on this near-monopoly.

The bull case for Johnson & Johnson

At more than 130 years old, Johnson & Johnson is hardly showing its age. The healthcare conglomerate has grown its sales and adjusted profits by 4% and 8%, respectively, in the most recent quarter. The numbers look even more impressive if you adjust for the effects of foreign exchange movements and the divestitures of some business segments. That's quite good for such a business that is worth nearly $400 billion.

The star of J&J's earnings report remains its pharmaceutical division. Sales grew by 7% to $10.3 billion and now comprise more than 50% of companywide sales. That growth is particularly impressive when considering that sales of its top-selling drug Remicade are heading in the wrong direction as the result of competition from biosimilars that also treat autoimmune diseases like Chron's disease and rheumatoid arthritis. However, the decline in Remicade sales is being offset by broad-based strength in growth drugs like Zytiga, Imbruvica, Darzalex, and Stelara.

Johnson & Johnson's bottom line is being strengthened by margin improvements, stock buybacks, and a more favorable tax rate. Those factors have led management to forecast impressive double-digit growth for the year. Current projections expect the company's profits to grow more than 7% annually for the next five years, as its pipeline of drug candidates continues to show promise.

Dividend growth will continue thanks in part to rising profits. The company has boosted its payout for 55 consecutive years. Even with the growth, the dividend only consumes about 44% of profits, so there should be plenty of gas left in the tank.

Investors don't have to pony up much to get a bite of Johnson & Johnson, either. Shares are currently trading for about 16 times next year's earnings estimates, and they offer up a market-topping yield of 2.5%. That looks like a fair price to pay for such a consistent business.

The only potential knock against investing in J&J is that the company's pharmaceutical division might face headwinds from the rising of biosimilar drugs. Pharmaceutical sales make up about half of the company's total revenue. If growth in that division stalls then it will be awfully hard for J&J to post bottom-line growth.

The better buy depends on you

Investors can do well with either of these stocks over the long run, so any decision they make today should account more for their own risk tolerance and preferences.

Personally, I'm a growth investor and have been a proud Intuitive Surgical shareholder for nearly a decade, so it gets my vote in this matchup. I can't help but be bullish on the business since it is such a dominant player in the surgical industry and continues to look poised for substantial growth driven in part by aging baby boomers.

However, those who prize value and income above all should prefer Johnson & Johnson. The company has been a bedrock investment for several decades and still looks strong at its core.