Dollar Tree (NASDAQ:DLTR) and Dollar General (NYSE:DG), the two leading dollar-store chains in America, are both resilient retailers that have consistently expanded as other brick-and-mortar players have folded. Both companies have withstood competition from Amazon.com and Walmart (NYSE:WMT) by selling cheaper products to lower-income shoppers.

Dollar General stock has rallied more than 10% this year, but shares of Dollar Tree have tumbled nearly 20%. Let's see why the former has outperformed the latter and whether it's still a compelling buy at these levels. 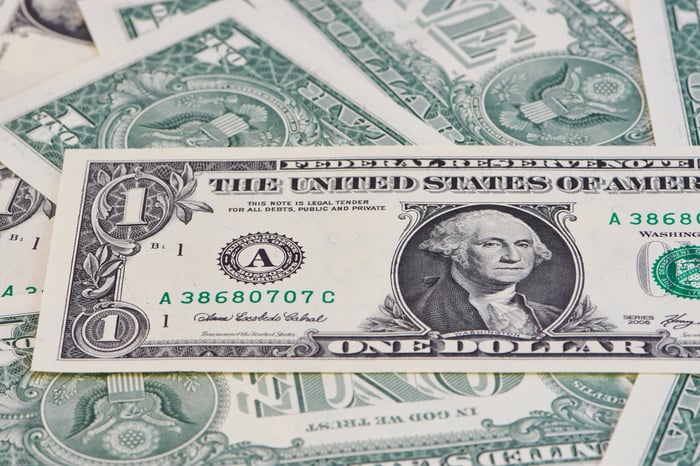 Dollar General isn't a "true" dollar store like Dollar Tree, but it also generally sells products at lower prices than Family Dollar. Dollar General opens most of its stores in rural areas, which typically aren't saturated by other lower-end retailers.

The stores at all three "dollar" chains have an average size of 8,000 to 10,000 square feet, compared to an average of more than 100,000 square feet for Walmart's stores. Those smaller stores make it easier to quickly locate and purchase products. But like Walmart, Dollar Tree and Dollar General remain heavily exposed to higher tariffs on Chinese products.

Dollar Tree's biggest problem is the dismal performance of Family Dollar, which is being squeezed by Walmart, Target, and Amazon. Here's how Family Dollar dragged down Dollar Tree's comp sales growth over the past four quarters.

Dollar Tree expects to post a low-single-digit comp sales increase for the full 2018 fiscal year. Total revenue is on track to rise 2.1%-2.6%, compared to 7.4% growth in fiscal 2017 (which included an extra week). Dollar Tree's messy top-line growth, which indicates that it would have fared better without Family Dollar, compares poorly to Dollar General's results over the same period.

Dollar General's biggest issue in recent quarters has been slowing store traffic growth, which it mainly offset with bigger average purchases per customer. For the full year, it expects comps to rise between 2.5% and 2.9%, and for revenue to increase 9% -- representing an acceleration from its 6.8% growth in fiscal 2017. (For Dollar General, both fiscal years have 52 weeks.)

Both Dollar Tree and Dollar General are boosting their sales growth with new store openings. Dollar Tree finished the third quarter with 15,187 stores, representing 3% growth from a year earlier. Dollar General's store count rose 6.3% over the same period to 15,277 stores.

Dollar General blamed its decline on an increase of its LIFO (last in, first out) provision, higher sales of lower-margin consumables, bigger markdowns, and higher freight costs. Dollar Tree attributed its drop to higher freight costs, markdowns, distribution costs, and occupancy costs, as well as expenses from hurricane-related losses. Gross margin at both companies could decline significantly if the trade war between the U.S. and China heats up again.

In the end, Dollar General remains a better investment than Dollar Tree. It isn't trying to fix an underperforming subsidiary, it focuses on less-saturated rural markets, and it doesn't compete directly against Walmart and other superstores.