Are there profits still to be had in this smoking-hot sector?

Marijuana has been a red-hot subject this year, with many states and even some countries easing restrictions or even outright legalizing the use of the drug. Despite the well-publicized news and hype surrounding those moves, there may still be opportunity to be had in the sector. We asked three of our contributors which marijuana stocks you should watch in December, and they chose Canopy Growth (CGC -5.96%), KushCo Holdings (KSHB), and Scotts Miracle-Gro (SMG -0.38%). 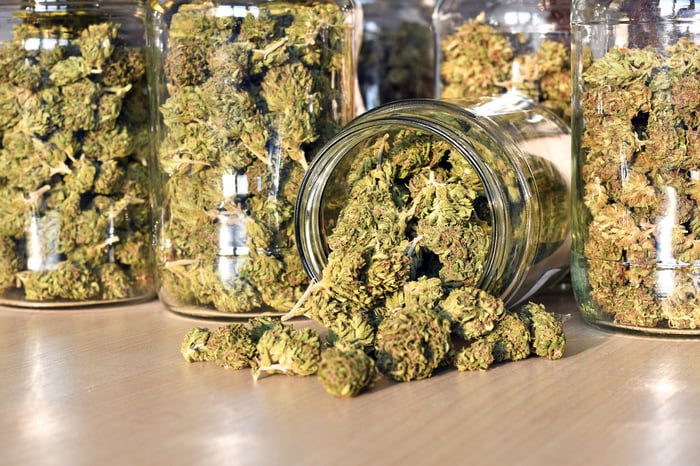 Keith Speights (Canopy Growth): Canopy Growth certainly has a lot of things going for it. Its production capacity is among the largest in the marijuana industry. The company's tight relationship with Constellation Brands (STZ -0.14%) -- and the $4 billion from the big alcoholic beverage maker's investment earlier this year -- are two other huge pluses for Canopy. But the reason why I think Canopy Growth is a top marijuana stock to watch in December relates to what's going on in Washington, D.C.

The U.S. Congress appears to be very close to passing legislation known as the 2018 Farm Bill that would legalize hemp at the federal level. Hemp, like marijuana, is made from the cannabis plant. The big difference, though, is that hemp contains low levels of THC, the primary psychoactive ingredient in cannabis.

Market researcher Brightfield Group projects that hemp-based cannabidiol (CBD) products, including CBD-infused beverages, will be a $22 billion market in the U.S. by 2022 if this legislation becomes law. And it's a market that Canopy Growth, along with its big partner Constellation Brands, is likely to immediately target.

Canopy has already made acquisitions in the hemp industry, including its recent purchase of the assets of U.S.-based hemp company ebbu. Assuming the 2018 Farm Bill passes and is signed into law by President Trump, Canopy will finally be able to enter the U.S. market in a major way, with an opportunity several times larger than the Canadian recreational marijuana market.

Forget growers -- sales at this marijuana supplier are booming

Todd Campbell (KushCo Holdings): The marijuana industry is only beginning to move from the shadows to legal, regulated marketplaces, so picking the ultimate winners and losers at this point is a bit of a guessing game. Nevertheless, I think KushCo Holdings is a stock that risk-tolerant investors can consider owning in their growth portfolios.

KushCo Holdings sells packaging, such as single-roll tubes and vape cartridges, to marijuana companies engaged in growing, distributing, and retailing marijuana products. It's a "picks and shovel" type play on the industry because its success depends on consumer adoption of marijuana products, rather than any one producer succeeding.

In the fiscal year ending in August, its sales surged 177% year over year to $52.1 million, and following the opening of Canada's recreational marijuana market in October, management's targeting sales increased to $110 million or more this fiscal year.

However, the potential to profit from growing use in Canada isn't nearly as big as the potential associated with more widespread legalization in the United States. Canada's recreational market could be worth about 4 billion Canadian dollars in 2019, but over $50 billion is spent on marijuana in the United States. As more states pass pro-pot laws (only 10 states currently have recreational laws on the books), demand for KushCo Holdings products, including supplies and marijuana extraction solutions, should increase.

For instance, KushCo Holdings recently invested in a facility in Massachusetts to serve states on the East Coast, and there's reason to think that facility is going to be busy next year. Massachusetts' first two marijuana dispensaries opened late last month and they've already generated $4.8 million in combined sales in their first two weeks, according to regulators.

It's anyone's guess where KushCo Holdings stock will trade in the short term, but given that marijuana packaging is highly regulated, KushCo Holdings is a leader in its niche, and more states are passing laws creating marijuana marketplaces, I suspect this stock will be a long-term winner.

The lawn care titan that has turned to weed

Chuck Saletta (Scotts Miracle-Gro): Once best known for being the official lawn care company of Major League Baseball, Scotts Miracle-Gro has recently made huge bets on growing weed -- marijuana, that is. Its recent purchase of Hawthorne Gardening set it up to be a major player in hydroponics, a way to grow plants in a nutrient-rich solution rather than soil.

The problem with that purchase is that Scotts Miracle-Gro has to continue to invest to support that growing business. For instance, it recently took on substantial debt to cover the $425 million cash portion of its purchase of Sunlight Supply to help enhance its marijuana-related business lines. As a result, Scotts Miracle-Gro now sports nearly $1.9 billion in long-term debt on its balance sheet vs. less than $1.3 billion at the end of its 2017 fiscal year.

Despite the fact that hydroponics allows better indoor growing conditions, Scotts Miracle-Gro's overall business is still highly seasonal and relies heavily on the warm-weather months in North America. This being the company's weaker time of year, it's worth watching to see how well it handles the seasonal slowdown with its higher debt load. If it sails through the quarter smoothly, then look for it to have decent potential to show growth in 2019 and beyond as it leverages its marijuana-related acquisitions.