Ubiquiti stock jumped nearly 18% on Nov. 9, 2018 alone after the company revealed its quarterly revenue had climbed 15.1% year over year, to $282.9 million, translating to adjusted earnings of $86.2 million, or $1.17 per share. Most investors watching the stock would have settled for revenue of $252 million with earnings of $0.93 per share. 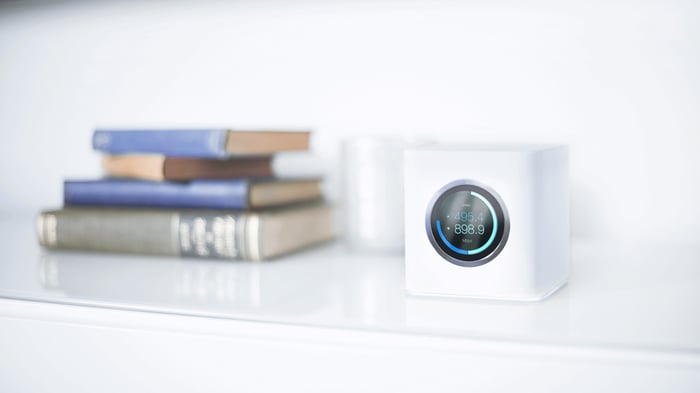 Ubiquiti Networks' growth was primarily driven by a more than 40% increase in enterprise technology segment sales, to $177.4 million, and partly offset by a 12.5% decline from the service provider technology segment to comprise the remainder of revenue. Ubiquiti also repurchased and retired more than 1.2 million shares during the quarter for roughly $113 million and followed by approving a new $200 million repurchase authorization in conjunction with its quarterly release.

Looking ahead, Ubiquiti repeated its past warnings that gross margin likely will fall to between 42% and 45% (from 46.5% this quarter) due to the impact of recently announced tariffs on products imported to the U.S. from China. But the company also suggested it will be able to mitigate the impact of those tariffs over the long term, which should bring gross margins back to their typical 45% to 50% range.

As such, Ubiquiti Networks reiterated its previous outlook for full fiscal-year revenue of $1.1 billion to $1.2 billion, with earnings per share of $4.00 to $4.80. The latter range comes with the caveat that additional tariffs could drag full-year earnings to "3.65 or lower" -- though investors were already prepared for that possibility.

As it stands, Ubiquiti Networks' stock price has largely treaded water since its report -- an admirable feat considering the outsized volatility we've seen recently from the broader market and tech stocks, in particular. But as Ubiquiti continues to outperform over the long term and temper expectations where appropriate, I think the stock will continue to follow suit.