Ballard Power Systems, Inc. (NASDAQ:BLDP) was once an extremely high-potential company that could upend everything from energy distribution to the entire transportation industry. But the company's growth has stalled, and losses have mounted, leading to a rough year on the stock market, with shares falling 32%.

The fuel cell industry is changing quickly, and no one knows exactly where it's going, but here's a look at where I think Ballard Power Systems may be in five years. 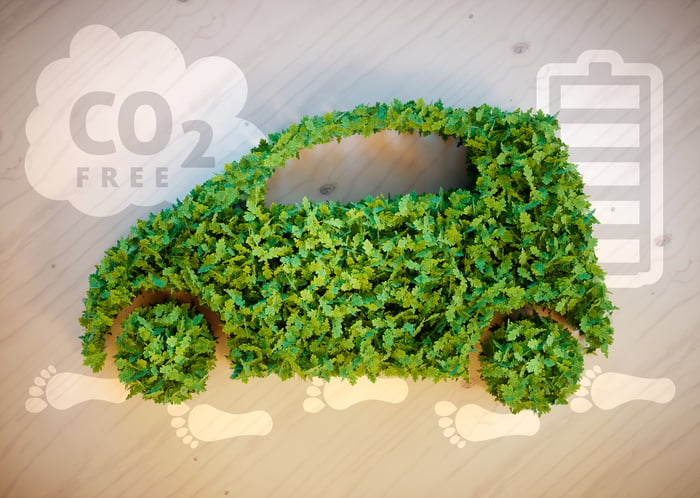 For years, Ballard Power Systems has been touting incredible potential for fuel cells in multiple end markets. But that potential hasn't led to any significant improvement in operating cash flow or net income, as you can see below. 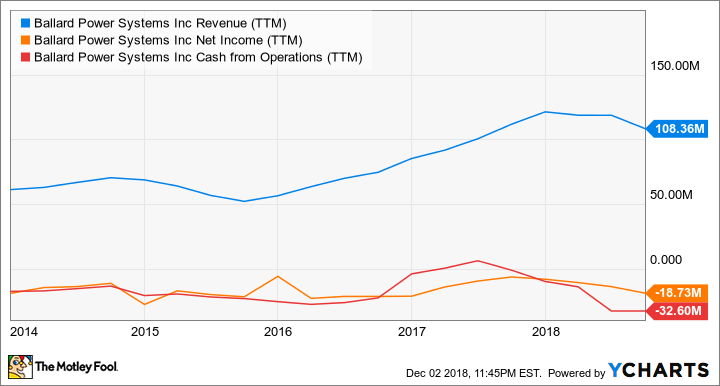 There just isn't a big enough market for fuel cells in materials handling and heavy-duty motive applications to drive a profit. And management has to spend more on R&D and sales and marketing than it's making in gross profit right now. That leads to the negative cash flow you see above, and it doesn't look like the trend will change anytime soon.

Chasing after the wrong markets

The biggest problem Ballard has is once-promising markets moving away from fuel cells. Energy storage and heavy-duty trucking were once huge markets the industry targeted, but battery technology has improved in cost, energy density, and charging speed so quickly that most customers are choosing batteries over fuel cells. Even Tesla and Volvo, who are looking at building long-haul electric trucks, are choosing batteries over fuel cells. Yet, management still thinks those heavy-duty transportation markets are its future.

President and CEO Randy MacEwen said during the third-quarter 2018 earnings release, "We continue to position Ballard as the leading fuel cell technology provider in the FCEV market for Heavy Duty Motive applications." That may be chasing after a market that's already lost.

One of the markets management is still bullish on is China. It's where the most next-generation passenger vehicles and trucks are being made, and a collaboration with Weichai Power Co is seen as a way to crack into the market. However, the partnership may run into similar challenges as the fuel cell market overall, especially given the fact that China is a leader in battery cell manufacturing.

Not out of options

Ballard has done a good job keeping its financial options open despite the challenges I laid out above. You can see below that the company doesn't have any debt and instead has used stock sales to fund operations over the last decade. 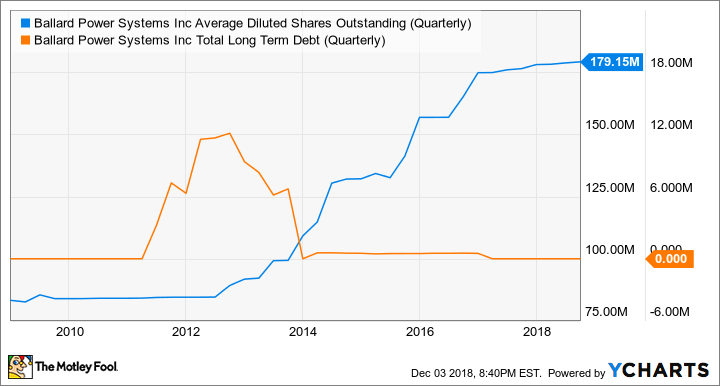 This gives the company the flexibility to fund operations going forward if it doesn't generate free cash flow. More stock could be sold, or debt could be taken out. Compare that flexibility to its closest competitor, Plug Power, who is been accumulating debt, making its balance sheet much higher-risk than Ballard's. At least Ballard is better positioned financially than Plug Power if it comes down to a battle between the two in fuel cells.

Where is Ballard Power Systems going?

Right now, the future doesn't look bright for fuel cell companies overall, and that's Ballard Power's biggest weakness. The company is well positioned within the fuel cell industry with a strong balance sheet and good partnerships, but if the entire industry is losing its battle with batteries for the future of energy and transportation, it could be a losing battle.

Management may have to shrink the business and focus on niche markets like forklifts and airport vehicles, rather than chasing every big market in energy. Until it makes that adjustment, the company will struggle financially, and that's why I don't think Ballard Power Systems stock will do well over the next five years. It just isn't a stock long-term investors should be buying today, despite the potential fuel cells once had in energy and transportation markets.