The e-commerce giant will soon be in pole position in India.

India is one of the hottest e-commerce markets around the globe, as it holds massive growth potential. The Indian e-commerce industry was worth $38.5 billion in 2017, but it is estimated to hit $200 billion in sales by 2026, on the back of growing internet adoption and smartphone usage.

No online retailer would want to miss out on such a massive opportunity. That's why big-box retail giant Walmart (WMT 0.11%) made a $16 billion bet on the Indian market by buying a 77% stake in local online retailer Flipkart. This looked like a smart move, as Flipkart was an early mover in that market, establishing a robust delivery network and grabbing over a third of India's e-commerce market by the end of 2017.

But Amazon (AMZN 0.25%) has stolen Flipkart's thunder. The e-commerce giant entered the Indian market a little over five years ago, and it has continuously eaten into Flipkart's dominance by pouring in billions of dollars to develop its own network. Now it looks like all that hard work is paying off. 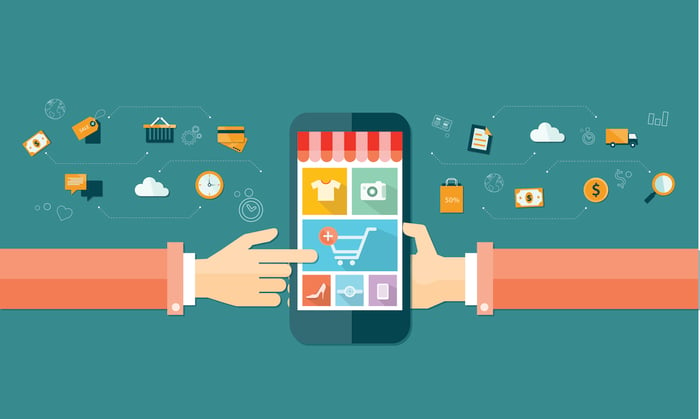 Amazon is pulling away in India...

Amazon's e-commerce market share in India shot up to 27% in 2017 from just 10% three years prior, while Flipkart lost 4 percentage points over the same period to 34%. The American behemoth is now firmly on track to leave Flipkart behind as its gross merchandise value (GMV) clocked $7.5 billion in India for the fiscal year that ended in March 2018. Flipkart's GMV stood at only $6.2 billion for that same period.

GMV is the total value of goods sold over a specific period on an e-commerce site. Amazon's substantial lead here is an indication that customers are using its e-commerce platform to make more purchases than they are on Flipkart. Additionally, both companies had very close GMV figures in the preceding fiscal year, so the fact that Amazon has now created a nice gap is proof that its strategies to grow sales in India are paying off.

As for sales, Amazon India's revenue reportedly stood at $3.2 billion last fiscal year, behind Flipkart's $3.8 billion. But Amazon looks all set to soon take the lead in revenue, as its top line grew a massive 82% last year thanks to the higher GMV, outpacing Flipkart's 47% revenue growth by a significant margin.

It wouldn't be surprising to see Amazon emerge as the top e-commerce company in India this year, and subsequently expand its lead as it continues to find ways to make a bigger dent in this market.

There's a good chance that Amazon will sustain its impressive momentum in India; it's following a solid strategy to capitalize on the country's growing smartphone and internet penetration. The latest reports suggest that Amazon is now following a comprehensive strategy of bringing not only well-known retailers into the fold, but also local shops in small cities and villages, to expand its footprint.

What sets Amazon apart from the rest of the field is that it's creating an ecosystem by encompassing different platforms to ensure that it keeps adding new customers while locking in existing ones. For instance, Amazon offers its Prime membership service at extremely cheap rates in India, giving users access not only to fast delivery times but also to its music and video libraries, along with other perks.

Additionally, its Alexa-enabled smart speakers are already a hit in India, with IDC estimating that the company leads the country's smart-speaker market. That allows Amazon to explore ancillary verticals such as audio books, and it might increase e-commerce sales because the Echo devices make it easy to place online orders through voice commands.

This puts Amazon at an advantage against the Flipkart-Walmart pairing. The latter lacks additional services such as music or video, allowing Amazon to attract new users looking for streaming content. If those customers were previously using Flipkart for their online purchases, there's a good chance that Amazon could bring them on board by offering Prime deals and faster shipping.

Amazon is sitting pretty after its first five years in India. The next five years, however, are going to be more exciting. The country's e-commerce market is going to get bigger, paving the way for stronger growth in Amazon India's revenue. It looks well-placed to lead this space.