Please ensure Javascript is enabled for purposes of website accessibility
Log In Help Join The Motley Fool
Free Article Join Over 1 Million Premium Members And Get More In-Depth Stock Guidance and Research
By Rich Smith - Dec 15, 2018 at 7:13AM

And this was only the latest in a long string of Abrams MBT contract wins.

What a difference three years make.

As recently as 2015 we were still talking about how the dearth of new orders for M1 Abrams Main Battle Tanks (MBTs) was threatening General Dynamics' (GD -1.97%) ability to keep its Lima, Ohio, tank-building factory open. Three years later, though, after big orders for new and upgraded Abrams tanks placed by Iraq, Saudi Arabia, and Kuwait, Lima seems to be off life support. 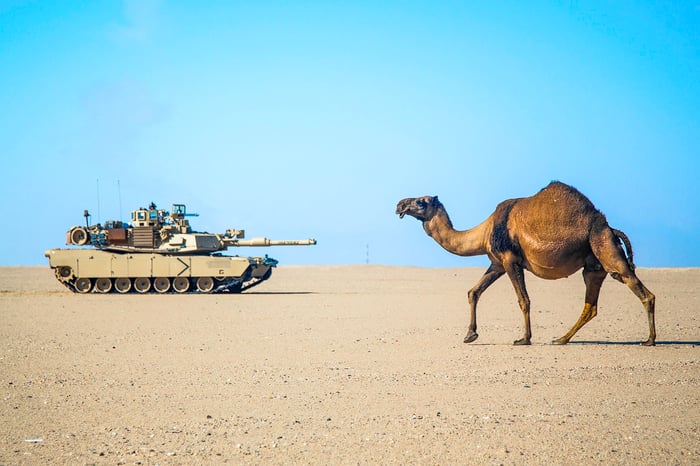 Iraq's order of 175 M1A1 Abrams MBTs needed to fight ISIS in 2015, followed by an order for 153 "tank structures" by Saudi Arabia a year later, and then Kuwait's request to regun and up-armor 218 M1A2 MBTs, helped to secure Lima's future. In total, those three orders promise to eventually provide $4.25 billion in new revenue to General Dynamics' once-struggling combat systems division, which builds the M1. Indeed, as work begins on fulfilling these orders, General Dynamics' combat systems division has already experienced its first full year of revenue growth (last year) in nearly half a decade.

Good news has continued to roll in in the years since. Late last year, for example, the U.S. Army awarded General Dynamics a $2.6 billion contract to upgrade 786 M1A1 Abrams MBTs to the M1A2 System Enhancement Package Version 3 (SEP V3) configuration -- work that will be continuing through late 2020. And now: more good news.

In its notification, the DSCA made a point of noting that refurbishment of the Moroccan tanks will be conducted both at the Anniston Army Depot in Anniston, Alabama, and at GD's Joint Systems Manufacturing Center in Lima, Ohio. These two new contracts, announced less than a year apart, will provide nearly as much new revenue to General Dynamics' combat systems division as did the three Mideast contracts before them, combined.

It's hard to overstate just how important all this new business -- more than $8.1 billion in all -- is to General Dynamics. Assuming GD can maintain its current 15.4% profit margin on the tank sales and tank refurbishments it's been tasked with, these five contracts should combine to produce roughly $1.25 billion in pre-tax profit for the company.

The fact that these contracts will take years to fulfill (note again the U.S. Army contract from last year, which will run three years through completion) means it should be some years now before General Dynamics investors have to worry again about whether Lima might need to be shut down, necessitating layoffs and restructuring costs (and, eventually, new costs to restart the plant once someone starts ordering tanks again). None of that need concern us right now.

But I do think there's a larger point worth highlighting here, and that's the fact that while last year's U.S. Army order and last month's Moroccan order enhance the good news for GD, they're actually icing on the cake. The cake itself -- the thing that saved Lima, and that helped to reinvigorate General Dynamics' struggling combat systems division -- was the influx of new orders from Iraq, Kuwait, and Saudi Arabia.

What these three countries have in common is that they've all been contending with a variety of clear and present dangers, first from ISIS, then from a destabilized Syria, and most recently from various nonstate actors sponsored by Iran. It was the need to arm up to face these threats that created renewed demand for General Dynamics' famed Abrams tanks in the region. Logically, therefore, as long as these threats remain active, demand for General Dynamics' products should remain healthy. Contrariwise, should things settle down in the Mideast -- if truces can be brokered in Syria and Yemen, for example -- that would decrease the need to buy tanks from General Dynamics.

Investors in American defense contractors need to keep a close eye on the status of conflicts in the Mideast -- because in the case of General Dynamics, they clearly have an effect on the business.