Please ensure Javascript is enabled for purposes of website accessibility
Log In Help Join The Motley Fool
Free Article Join Over 1 Million Premium Members And Get More In-Depth Stock Guidance and Research
By Chris Neiger - Dec 23, 2018 at 7:15AM

Both Facebook (FB 4.24%) and Amazon (AMZN 4.03%) have seen their share prices tumble over the past few months, with the social media giant's shares down more than 30% over the past six months and Amazon's stock falling about 16%. These drops may have tech investors wondering which of the two companies is worth buying at lower prices, and which should be avoided.

To help investors compare Facebook and Amazon, let's look at how the companies earn their revenue and dig into a few reasons why Amazon appears to be in a much better position to grow in the coming years. 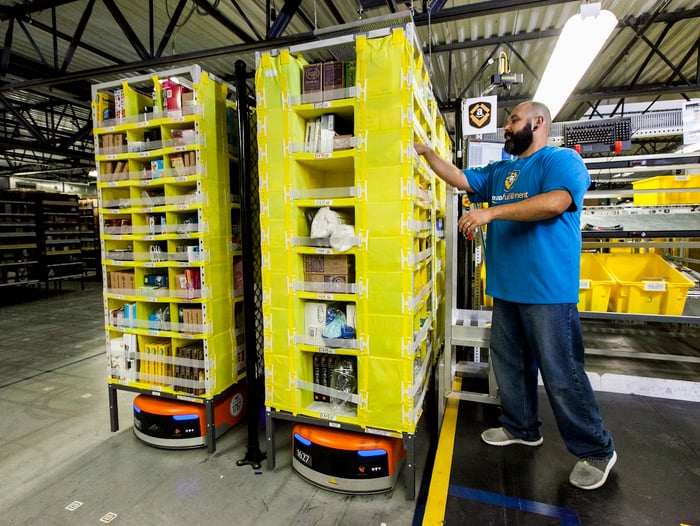 This setup has worked very well for Facebook, as it's amassed more than 2 billion monthly active users on its Facebook platform. In its most recent quarter, Facebook's earnings were $5.1 billion on $13.7 billion in sales.

Advertising is virtually the only way Facebook makes its money, though, and lately, the company's privacy and data mishaps have made its singular bet on advertising a growing problem. Facebook is facing a lawsuit from the U.S. government after Cambridge Analytica accessed users' data without consent, privacy concerns have grown after the company suffered a major data breach of its platform just a couple of months ago, and Facebook is still reeling from the use of its site to spread misinformation during the 2016 U.S. presidential election. On top of all of that, it was recently discovered that Facebook has been handing over more user data to major tech companies than it previously admitted.

Why is all of that important to Facebook's advertising business? Because Facebook's livelihood is tied to how often people interact with its namesake app, and recent research indicates users aren't happy. The Pew Research Center released a report in September which found that 42% of U.S. users had taken a break from Facebook for weeks at a time over the past year, and 26% have deleted the app off of their phones. The Pew research data was collected after the Cambridge Analytica problems were revealed, but before the remaining scandals came to light. Which means that Facebook may be suffering even more user backlash than the Pew data suggests.

All of these scandals aren't a death-knell for Facebook, but they've done tremendous damage to the company's brand. If users can't trust the platform they spend time on, they'll go elsewhere -- and advertising dollars could eventually leave with them.

While Facebook has been reeling from its scandals, Amazon has been busy growing its core businesses and expanding further into new ones. Amazon makes most of its money from its e-commerce platform, and sales from its online U.S. business increased by 35% in the most recent quarter. In 2018, nearly 50% of all online U.S. sales were made on Amazon's site. For reference, the next-biggest e-commerce company is eBay, with just 6.6% of the U.S. market.

But unlike Facebook, Amazon also has a handful of other core businesses that are helping the company grow. For example, its Amazon Web Service (AWS) cloud computing business made up 12% of the company's total sales in its most recent quarter, but earned slightly more operating income than Amazon's online retail business.

Amazon is already the largest public cloud computing company with 34% market share, easily outpacing Microsoft's 14% and Google's 7%. That's great news for Amazon, as the cloud market is expected to grow from $186.4 billion in 2018 to $302.5 billion by 2021.

As if Amazon's cloud computing opportunities weren't enough, the company has also quickly become a major advertising player as well. Amazon will bring in an estimated $4.6 billion from advertising this year, making it the No. 3 digital advertising platform behind Facebook and Google. It's expected to have 7% of the U.S. digital ad market by 2020, up from its current 4%.

Yes, Facebook might be able to emerge from its current privacy and legal problems and see its share price start climbing again. But with so many issues weighing the company down right now, it's unclear how long that might take. A significant aount of damage has been done to Facebook's brand already, and any more bad news will cause further hesitation among advertisers and users.