2018 was another big year for ride-sharing services as they continued to disrupt the broader mobility market. It's been little more than five years since passengers began hailing cars through smartphone apps, but services like Uber and Lyft are now mainstream, challenging traditional taxi operations and even surpassing them in a number of cities, including New York, the biggest ride-hailing market in the U.S.

Beyond taxis, ride-sharing services have also presented challenges to rental car companies like Hertz and Avis, and even threatened to disrupt traditional car ownership in cities since hailing a ride wherever you are has never been easier or more convenient. The so-called driverless car revolution would only hasten the transition to ride-sharing by making the service cheaper, eliminating the need and cost for a driver.

Below are the four most popular ride-sharing services this year in the U.S. 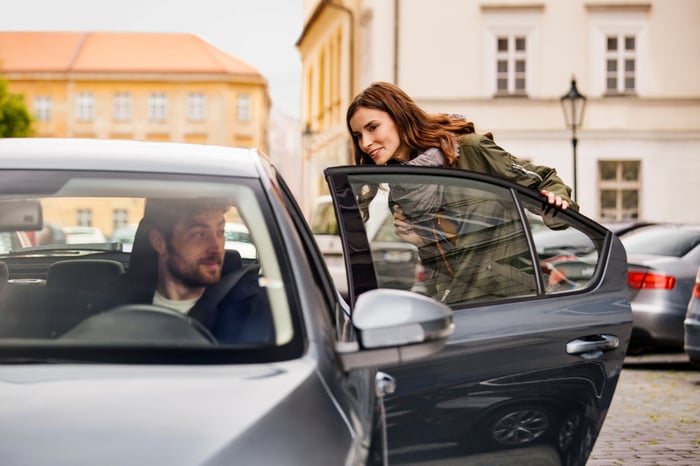 It should come as little surprise that Uber topped the list again this year. No other ride-hailing service has been more aggressive in its expansion and its tactics than Uber, and while some of its moves have damaged the brand and even cost founder Travis Kalanick his job last year, the strategy succeeded in making the service dominant in the U.S. and a major player in Europe and elsewhere in the world.

According to data from research firm Second Measure, Uber had a 69.6% share of the domestic ride-sharing market as of November of this year, though it has been gradually losing share to rivals like Lyft. At the end of 2017, Uber had a 71% market share. The company is most dominant in the Houston, Miami, and Boston markets and has leveraged its position in ride-hailing into other businesses; its restaurant delivery services UberEats has topped Grubhub in several markets. It's also invested in dockless scooter company Lime and acquired dockless bike-sharing service Jump, seeking to gain another piece of the disruptive mobility market.

Although Uber is still losing billions of dollars a year, the company is prepping for an initial public offering (IPO) next year, seeking a valuation of as much as $120 billion.

Lyft has been a thorn in Uber's side throughout the brief history of ride-sharing as the two have formed what's essentially a duopoly in the industry, keeping prices low for consumers but preventing either company from turning a profit.

Lyft is strongest on the West Coast as a more liberal customer base seems to be attracted to what many see as the friendlier brand of the two. Both Lyft and Uber are headquartered in San Francisco, meaning Lyft doesn't necessarily have a home-field advantage on the West Coast. It's most popular in Seattle, San Francisco, and Austin --notably, it commands 43% of the market in Seattle, closely challenging Uber.

Like its larger rival, Lyft is also readying for an IPO next year, eyeing a valuation of $15 billion.

With the exception of New York City, Uber and Lyft control essentially the entire U.S. ride-sharing market as their mindshare is much stronger than that of potential rivals, and demand is considerably lower than it is in New York. In fact, New York makes up nearly a quarter of the national ride-share market, despite having less than 3% of the U.S. population, and in that city, other ride-hailing companies have been able to compete with Uber and Lyft.

One such company is Via. Operating in Chicago and Washington, D.C., as well as New York, Via is more of a carpool service than Uber or Lyft as it offers pooled rides to an adjacent corner to your destination and picks you up at a nearby corner, making rides faster and cheaper. Uber and Lyft both offer their own pools, known as UberPool and Lyft Line, respectively, and Uber has a similar service called UberExpress that takes you near your destination. However, the two ride-sharing leaders primarily rely on private rides for their revenue.

Close behind Via is Juno, which was acquired by Israel-based ride-hailing company Gett in 2017 for $200 million. Juno has retained its identity as a standalone app and remains a popular option in New York. Juno has branded itself as something of anti-Uber, saying that it charges its drivers lower commissions than rivals like Uber, which has struggled at times with driver protests and backlashes. Juno says it charges drivers commissions that are 30% to 40% lower than other ride-share services, hoping that will curry favor with consumers concerned about low wages in the industry.

Juno also offered a profit-sharing program for drivers -- a reminder that these companies compete for drivers just as intensely as riders -- but ended it shortly after the company was acquired by Gett. Like Via, Juno does about 1 million rides a month in New York.

2019 is shaping up to be another exciting year in the ride-sharing industry. Not only are Uber and Lyft preparing to hit the public markets, but traditional automakers are also angling to break into the ride-share game. General Motors is preparing to launch its own autonomous ride-hailing service in New York next year, and Ford is working on its own as well, though that's not expected to be ready until 2021.

If autonomous vehicle technology continues to move forward, 2019 could be just the beginning of ride-sharing's takeover of the mobility market, and Uber and Lyft's IPOs should only fuel its expansion.