Amazon itself deserves a lot of credit for retailers' good fortune. Quickly crunching the data from Christmas sales, Amazon announced today that it enjoyed "a record-breaking holiday season ... with more items ordered worldwide than ever before." Improving over last year's similarly record-setting season, in which the company figuratively carpet-bombed the nation with deliveries of bargain-priced $30 "Echo Dot" voice-ordering systems, Amazon noted that Christmas 2018 saw even "millions more Amazon Devices" sold than it had managed to sell last year. 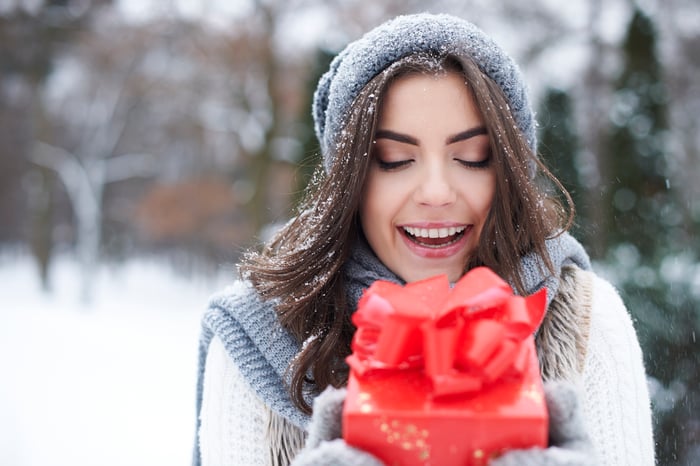 December was a month to remember for many retailers -- not just Amazon.com. Image source: Getty Images.

That all sounds like good news for Amazon.com, of course, but shouldn't investors be thinking that Amazon's gain implies other retailers' pain? Shouldn't Kohl's and Macy's stocks be going down as Amazon stock goes up?

Not necessarily. You see, at the same time as Amazon was tooting its own horn, over at Mastercard, that company's SpendingPulse market-research service was clarifying that Christmas 2018 brought holiday cheer to retailers all across the country. From November 1 through December 24, says SpendingPulse, retail sales "increased 5.1% to more than $850B this year."

Think about that for a moment. Nearly $1 trillion retail dollars was spent in less than two months. Even Amazon couldn't have hoovered up all that cash. (Indeed, Amazon's total revenues for the last 12 months were only $221 billion). Although SpendingPulse noted that online spending -- up 19.1% year over year -- once again outpaced brick-and-mortar sales, Kohl's and Macy's now have large online e-tailing operations of their own.

In short, Amazon's gain is not necessarily Kohl's and Macy's pain. Meanwhile, Kohl's and Macy's stocks are both up less than 5% so far this year -- barely one-third as much as Amazon stock -- while Kohl's stock costs just 10.6 times trailing earnings and Macy's only 5.4 times earnings.

Given that both of these more traditional retailers cost so much less than Amazon at more than 80 times earnings, now might be a good time to capitalize on SpendingPulse's insight and do a bit of post-Christmas bargain-stock shopping of your own.

Why Amazon.com, Macy's, and Kohl's All Popped 5% or Better on Wednesday @themotleyfool #stocks $AMZN $KSS $M Next Article
Current