The chipmaker can get a solid boost in CPUs thanks to its product development advantage over Intel.

Advanced Micro Devices (AMD 0.79%) has been in hot water of late because of the waning demand for graphics cards used in cryptocurrency mining. Higher inventory levels are bringing graphics-card prices back to normal levels and hurting AMD's finances.

The company's top and bottom lines are expected to drop slightly in the fourth quarter. For comparison, AMD's revenue had shot up 33% annually in the same period last year and it had posted a nice profit, versus a loss in the prior-year period. It is natural for AMD investors to be worried by this slowdown, but they shouldn't forget that the company is making the right moves in another important area at Intel's (INTC 0.67%) expense. 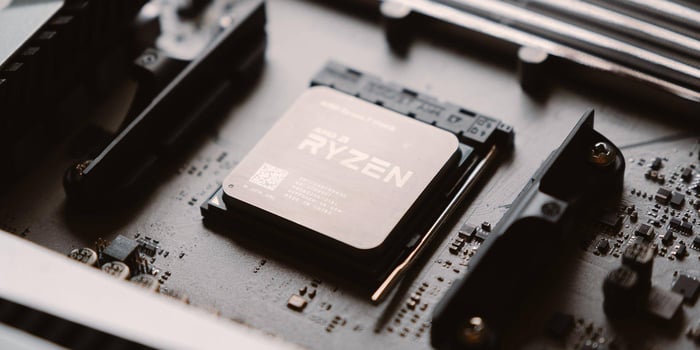 Central processing units (CPUs) have turned out to be Intel's fiefdom so far. The chipmaker has dominated this market over the past few years, but AMD's Ryzen CPUs are changing that. There were clear signs that AMD was cutting into Intel's CPU market share at the end of 2017, and it looks like AMD is going to exit 2018 on a high as well.

Mercury Research estimates that AMD's desktop CPU market share increased to 13% in the third quarter of 2018, up from 9.1% in the prior-year period. The company could end the year with higher market share as recent reports suggest that it is outselling Chipzilla's CPUs by 2-to-1 in Europe.

Germany's biggest online retailer of PC hardware, Mindfactory.de, recently revealed that it sold 16,000 AMD processors in November versus fewer than 8,000 Intel chips. AMD's CPU sales through that website nearly doubled on a year-over-year basis. Mindfactory.de had revealed in July that AMD Ryzen CPUs were selling at par with Intel's chips.

Mindfactory.de's numbers don't present the entire picture, but they do give us an idea about the shift of momentum in the CPU market from Intel to AMD. The German website is known to constantly provide updates on CPU sales, and its numbers this year have indicated that users prefer AMD over Intel.

AMD's CPU market share growth has been steady so far, and the company is likely to step it up in 2019 thanks to new chip architecture. AMD will officially unveil its 7-nanometer CPUs based on its Zen 2 architecture at the CES 2019 electronics show in January in Las Vegas, giving it a head start over Intel, whose competing 10nm platform won't arrive until the end of next year.

Intel has already missed a few deadlines on its next-gen architecture, and it's possible that its 10nm products won't arrive until 2020. This puts AMD at an advantage because a small manufacturing node will allow it to make more efficient CPUs with more computing power and greater efficiency in power consumption.

In 2020, AMD plans to optimize the 7nm architecture to further improve the efficiency of the Zen 2 platform. So the company could have honed its architecture further by the time Intel comes to the market with its competing chips. As such, it won't be surprising to see AMD gaining market share at a much stronger pace once its Zen 2 CPUs are available.

CPUs can help AMD turn around

According to a DigiTimes report, AMD could end 2018 with 30% of the global CPU market thanks to production delays at Intel and the favorable demand for AMD's Ryzen chips. That looks outlandish considering that the company hadn't reached even half of that projection by the third quarter, but I wouldn't be surprised if it got close to that mark in 2019.

AMD's overall sales are predicted to increase over 7% in 2019 despite a forecast for revenue declines over the next two quarters. As such, the company's growing clout in the desktop CPU market could help it offset the GPU weakness and regain lost investor confidence by boosting revenue growth next year.