Glu Mobile (NASDAQ:GLUU) has had a tremendous run on the stock market over the past couple of years. The company's solid turnaround strategy has reaped rich rewards and Glu Mobile is expected to deliver yet another terrific year in 2019.

Investment banking firm Cowen has listed Glu as its best idea for the new year. It believes that the mobile gaming specialist will get even better in 2019 on the back of new games and the solid execution of its "platform game" development strategy. But can Glu sustain its hot streak, or will its weaknesses catch up with it? 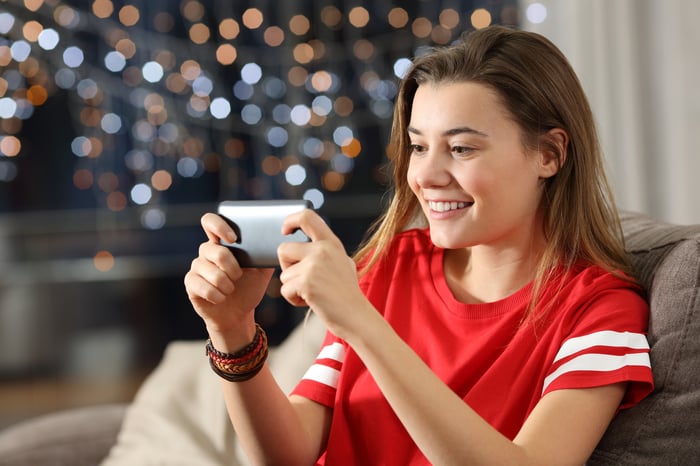 Why Glu can sizzle once again

Glu Mobile users are spending more money on virtual items within its titles. That's clearly evident from the massive rise in the company's bookings, which are expected to increase nearly 19% in the current fiscal year to $381 million.

In fact, Glu has been outperforming its own bookings guidance in recent quarters. It raised its bookings estimate for 2018 just recently, and that's not the first time the company has done so this fiscal year. One of the key reasons Glu customers have ramped up in-game spending is because of the company's tactic of enriching its important titles with new content.

For instance, Design Home's bookings shot up 37% annually last quarter to $41.2 million. The title generated $114 million in bookings in the first three quarters of the year, up substantially over 2017's full-year bookings of $98 million. Given that the game was originally launched in November 2016, the acceleration in in-game spending this year is an impressive feat, as mobile games' popularity generally tends to wane after the initial euphoria dies down.

However, Glu has managed to keep user engagement high on the back of regular updates and events. The company has been following a similar approach with two more titles -- Tap Sports Baseball and Covet Fashion -- which saw a cumulative jump of nearly 57% in bookings last quarter. In all, these three growth-centric titles supplied close to 80% of Glu's total bookings in the third quarter.

Glu plans to add more such "platform" games that can keep generating revenue in the long run on the back of regular content updates. WWE: Universe, a title developed in collaboration with World Wrestling Entertainment, is expected to become another "perennial growth title that appeals to a large global audience year-round without seasonality," according to CEO Nick Earl.

Meanwhile, Glu is also developing a title in collaboration with Disney that's expected to go into beta testing in early 2019. The success of such titles can help Glu sustain its momentum in 2019 by not only boosting its top line, but by also reducing its losses. That's because once a franchise-based game establishes a following, the company simply needs to add incremental updates to milk money from the same game instead of developing new games from scratch.

The good news is that this plan has paid off nicely this year. Glu's net loss was down to less than $12 million in the first nine months of the year as compared to the loss of $58 million it had incurred in the same period last year. The company has actually reduced its operating expenses on a year-over-year basis thanks to lower outlay on research and development.

As such, proper execution of Glu's formula in the new year should push the company toward profitability. But at the same time, there are a few words of caution for investors.

Glu's approach to building sustainable games that will lead to long-term revenue growth is a smart one, but investors shouldn't forget that the company is still largely dependent on a few select titles. Just three titles make up the majority of Glu's bookings, so if any one of them stops clicking with users, the company's business will take a hit.

Another potential risk is the failure of Glu's upcoming titles. The onus is on Glu to ensure that its new games do well enough to make up for a natural, gradual decline of its current growth drivers.

However, Wall Street predicts that Glu's new games will be a hit, as its revenue is expected to grow at a midteen rate next year. That bodes well for Glu's bottom line as it will have profitability within sight, provided it keeps costs in check. As such, there's a good chance that Glu will be able to carry its momentum forward into the new year, though investors should keep an eye on any signs of weakness.