Please ensure Javascript is enabled for purposes of website accessibility
Free Article Join Over 1 Million Premium Members And Get More In-Depth Stock Guidance and Research
By Harsh Chauhan - Dec 29, 2018 at 9:00AM

The wearables specialist is finally getting things right.

Fitbit ( FIT ) has had a hard time on the market since it went public in 2015. The company made its stock market debut at the height of the fitness tracker boom, but a change in consumer preference toward smartwatches has ensured a steady decline in its fortunes over the past three years. 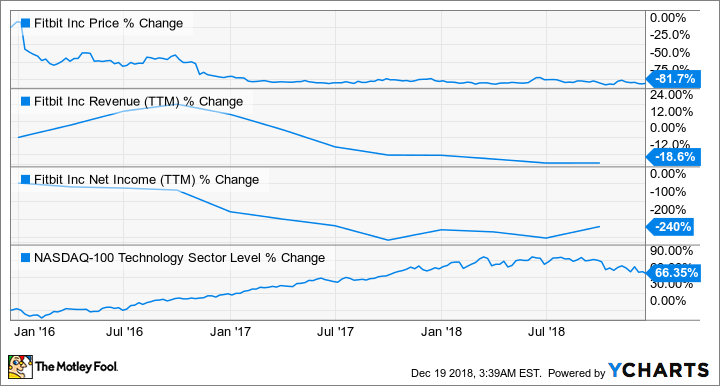 Fitbit's late entry into the smartwatch game, as well as rising competition from the likes of Apple and others, has kept it from making a roaring comeback. However, there are signs that the wearables specialist could have a breakthrough year in 2019, as it has started climbing the smartwatch ladder. 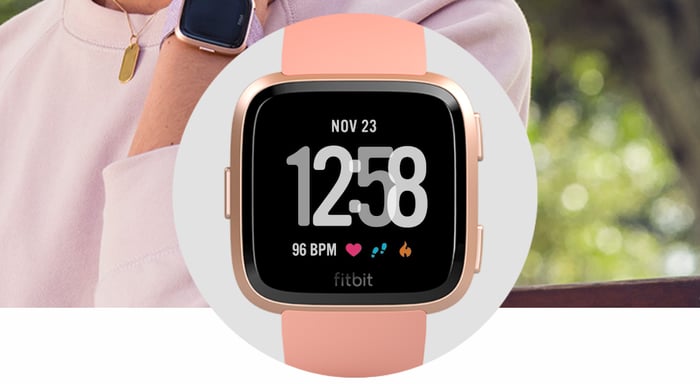 Fitbit launched its first smartwatch toward the end of 2017. The Ionic jump-started the company's turnaround by boosting its average selling prices and bringing new users into the ecosystem. But the Ionic smartwatch was priced  close to Apple's smartwatch and Fitbit introduced a cheaper device -- the Versa -- in early 2018.

The good news is that Fitbit's strategy of offering a premium and an entry-level smartwatch is reaping rewards for the company. In fact, smartwatches produced 49% of Fitbit's revenue during the third quarter of 2018 as compared to just 10% in the prior-year period. What's more, the company claims that it is occupying the second spot in U.S. smartwatch sales now. That's really impressive considering that its smartwatch endeavor is just over a year old.

Third-party data from Counterpoint Research corroborates Fitbit's rising smartwatch dominance. Counterpoint's Global Smartwatch Tracker points out that Fitbit's global smartwatch market share shot up to 16% in the third quarter of 2018 as compared to just 6% in the year-ago quarter. The gain was driven by a 348% annual increase in Fitbit's smartwatch shipments.

Clearly, consumers are warming up to the company's smartwatches. That's not surprising, as Fitbit is offering a nice entry point to consumers with the Versa smartwatch that was originally priced at $200, but carries a $50 discount. Such aggressive pricing allows Fitbit to undercut the Apple Watch Series 4 by a big margin, as the latter's pricing begins at $399.

Of course, the Apple Watch is feature-heavy as compared to the Fitbit Versa, but the latter isn't unimpressive. The Versa scores much better than the Apple Watch 4 in terms of battery life, and Fitbit has kept on adding new abilities and partner apps through software updates. Looking ahead, Fitbit plans to bring new features related to female health monitoring in 2019. It also plans to equip its smartwatches with apps that can help track complex activities such as skiing, snowboarding, and skateboarding.

So Fitbit is looking to push the envelope further. It is aiming to make its smartwatches more capable so that they appeal to a broader audience, which is the right thing to do in this fiercely competitive industry.

The smartwatch industry is a hotly contested one. Apple currently leads this space with a market share of 30%, followed by Fitbit, according to Counterpoint data. Then there are Chinese upstarts such as Imoo, Amazfit, and others who occupy the rest of the market and are positioned to grow their sales at an impressive pace thanks to established sales channels.

Imoo, for instance, is owned by the BBK Group of China, which is the parent of famous smartphone brands OPPO, Vivo, and OnePlus. Amazfit is owned by Chinese firm Huami, which is known for manufacturing Xiaomi's wearable devices. All these smartphone makers are known to have a solid retail presence in important emerging markets such as India, and they also price their smartwatches quite aggressively.

For instance, Xiaomi's Amazfit Pace smartwatch retails for just $130 in the U.S. and comes loaded with a ton of features including built-in GPS. Not surprisingly, Amazfit's smartwatch shipments were up an impressive 41% during the third quarter.

These Chinese players will pose a tough challenge for Fitbit thanks to their strategy of offering feature-loaded devices at cheap prices. At the other end of the spectrum, Apple could snatch away premium customers from Fitbit as it has already established its dominance in this space and has a huge installed base of iPhone users to whom it can sell its smartwatches.

Fitbit has done well to grow its smartwatch sales despite the challenges it faces. Its growth has been helped by the fact that it had 25 million active users at the end of 2017, the majority of which were using its old fitness trackers, as the Ionic smartwatch was just a few months old at that time.

So Fitbit already has an established user base that could upgrade to its aggressively priced smartwatches from fitness trackers. As such, the share of smartwatches in Fitbit's product mix should improve further next year and help turn its business around. Consensus estimates predict that Fitbit's sales will rise 4% in 2019, bringing an end to two years of revenue declines. That should be enough to inspire investor confidence in a stock that has underperformed the broader market since it went public.