Between slowing sales in the U.S. and China, pricing pressure in Europe, and trade-war concerns, 2018 was a rough year for auto stocks. When an entire industry falls out of favor, there are nearly always opportunities for investors -- but which automakers are worth a bet in today's choppy markets?

Here's a look at how one of the biggest automakers, Toyota Motor (NYSE:TM) compares with the electric-car upstart everyone loves to talk about: Silicon Valley's Tesla (NASDAQ:TSLA).

How Toyota and Tesla compare on valuation and stock performance

Neither Tesla nor Toyota has had a great year in the stock market. Through Thursday's close, Toyota is down about 8%, while super-volatile Tesla is actually up -- for the moment. 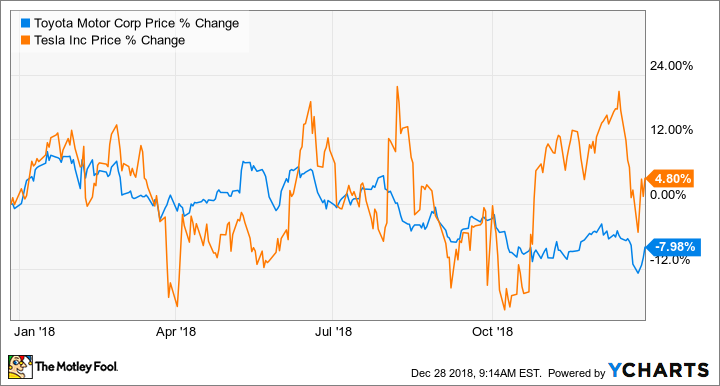 The usual earnings-based valuation measures don't give us much to work with here. Toyota is trading at around 7 times its trailing-12-month earnings, while Tesla posted a loss over the same period.

The reality is that these are very different kinds of stocks. Toyota is solidly profitable and relatively stable, with a hefty cash reserve and a strong credit rating. Tesla isn't. Although it has managed to squeeze out a quarterly profit here and there over its history (most recently last quarter), it has yet to report a full-year profit -- or to show that it ever can.

A fundamental comparison between these two companies isn't really useful. Toyota is one of the world's largest automakers, a manufacturing powerhouse with global reach and millions of satisfied customers. At least right now, Tesla is best thought of as a niche producer, making a few hundred thousand upscale electric cars a year for tech-savvy customers.

But Toyota is unlikely to grow by leaps and bounds from here, while -- at least to its most ardent fans -- Tesla's growth potential seems nearly unlimited.

Tesla's valuation is driven entirely by its story. As corporate stories go, it's a great one: To Tesla's fans, CEO Elon Musk is investing in the future -- of cars, of green energy, of space exploration -- right before our eyes. Comparing it to mundane old Toyota completely misses the point. 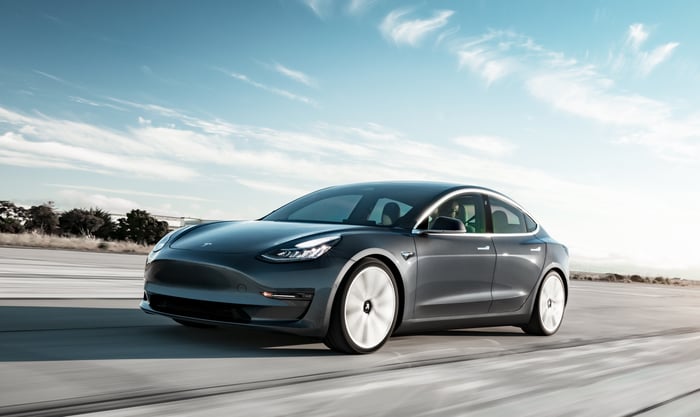 Tesla pinned its mass-market hopes on the Model 3. Initial demand was strong, but there are growing indications that it might not be sustainable. Image source: Tesla, Inc.

I'm not exaggerating when I say that Tesla's growth potential has seemed limitless at times. In April 2017, Morgan Stanley analyst Adam Jonas released a note that said Tesla's total addressable market could eventually be as large as $15 trillion.

For context, $15 trillion is about a fifth of the entire world's gross domestic product. With big-bank analysts saying things like that, it's clear that the expectations baked into Tesla's stock price are immense. It's no wonder that a niche automaker that hopes to deliver around 340,000 cars this year has a market cap of about $51 billion as I write this.

But last quarter's profit notwithstanding, Tesla's story has hit some speed bumps over the past year. Tesla struggled for months to get its Model 3 sedan, the long-promised "mass-market" Tesla, into full production. Among other things, the company spent a fortune (and several months) installing a highly automated production line, only to rip part of it out in a hasty redo after it failed to work as expected.

It has been a year and a half since Model 3 production officially began, and Tesla is still struggling to sustain a steady, high rate of production. Meanwhile, build quality has become a serious concern, with buyers still reporting that their Model 3s were delivered with missing parts or significant paint defects. (Tesla's latest response? An incentive for buyers who purchase without a test drive. I'm not kidding.)

Tesla has other issues. The company doesn't have a lot of cash, and there are big debt repayments coming due, including one in the first quarter of next year. And it has lost a ton of executive talent over the last year and a half, including several senior leaders.

All is not lost, of course. Tesla is still building and selling plenty of cars, and most customers are delighted with their rides. It's very possible that the company will mature into a sustainable, profitable business selling maybe 2 million or so of its innovative upscale electric cars year after year. (That would make Tesla about two-thirds the size of BMW AG by sales, with likely similar profit margins. Not a bad business, but note: BMW's market cap is only slightly higher than Tesla's right now.)

But on present evidence, it seems highly unlikely that Tesla will ever come close to selling the 9-million-plus vehicles that Toyota will sell this year, much less grow so large as to put Toyota and most of its "legacy" rivals out of business.

Is Toyota or Tesla the better buy now?

Tesla is in a tough spot. It's priced for huge growth over the next decade, but the odds of that growth materializing seem longer than ever. It could still become an important, sustainably profitable business -- but that business might not be worth much more than Tesla's market cap today.

Meanwhile, Toyota isn't going to generate huge profit growth any time soon. (In fact, at this point in the economic cycle, a couple of down years are more likely than not.) But it's a steady performer and arguably the only true "blue chip" automaker stock. You could probably do better than to buy it at current prices and reinvest the dividend, but you could definitely do a lot worse.