Alibaba (BABA -0.60%) has been investing heavily in new ventures over the past few years, and it hasn't been immune to the negative consequences.

The company reported that the losses from four of its strategic businesses amounted to $840 million last quarter. Those businesses include food-delivery company Ele.me, Southeast Asia marketplace Lazada, its New Retail projects, and its logistics arm, Cainiao Network.

Alibaba reminded investors that it takes time to see a financial return from new businesses. Despite the losses, Alibaba said all four businesses have shown robust revenue growth. And for that reason, the company continues to believe that these four businesses are smart investments for the long-term growth story. Let's give the businesses a closer look. 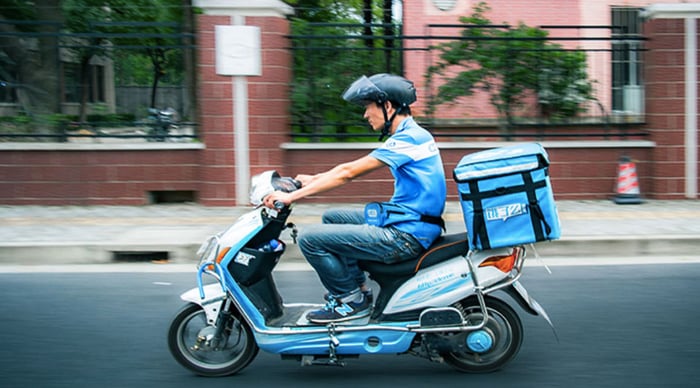 Alibaba acquired Ele.me just eight months ago to help it win over China's $10.7 billion food-delivery market. And the company has already started using Ele.me's extensive delivery network to offer other services, such as 24/7 drugstore deliveries in certain cities.

While Ele.me is the largest food-delivery service in China, its losses still increased sequentially last quarter. Alibaba gave two reasons for the losses. First, this was the first quarter in which the Ele.me acquisition was complete, so the previous quarter was not an accurate measurement of Ele.me's full losses for the period. Second, Alibaba said it upped its spending on Ele.me to help acquire new users.

A chunk of this spending came during the summer, when Alibaba launched a $3 billion campaign on behalf of Ele.me. The company said it hoped this marketing campaign would help it solidify Ele.me's position as the top food delivery company in China. Right now, Ele.me's top competitor is Tencent-backed Meituan Dianping.

In 2016, Aliaba invested $1 billion to acquire Lazada, launched in 2012 to serve Southeast Asia, in 2016. In 2017, Alibaba boosted its stake in the company to 83% with another $1 billion investment. And in March, Alibaba announced that it was injecting an additional $2 billion into Lazada as it seeks to build out the e-commerce operations in the region.

Alibaba has been investing heavily in its new retail strategy over the past few years as a way to update struggling brick-and-mortar retail stores. Alibaba was the perfect company to help outdated physical stores, thanks to its access to large troves of data on customers, as well as new technology.

The biggest new retail project is Hema grocery stores, which now have 77 locations in China. The stores offer 30-minute deliveries and are growing quickly in busy urban areas. In addition, Alibaba has partnered with Sun Art, the largest hypermarket chain in China, to update its technology and delivery system. Sun Art is now utilizing Alibaba's Taobao app and delivery network to offer fast online delivery for its own customers.

Alibaba groups its new retail revenue into the core commerce segment's "other revenue" category. This group represents 10% of Alibaba's overall revenue and saw a 151% year-over-year growth in revenue. That means Alibaba's efforts are paying off and that its new retail projects could become one of its main sources of revenue in the future.

In 2017, Alibaba took control of Cainiao for $807 million to give it more control over its deliveries and logistics in China and abroad. And earlier this year, Alibaba pledged an additional $15 billion over the next five years to build out its global logistics network.

In a similar situation to Ele.me, the consolidation of Cainiao over the past year has increased the cost of revenue for Alibaba. But the payoff is worth the investment, as Cainiao will help Alibaba provide the best and quickest delivery experience for customers.

This year, Alibaba has put money into providing updated forms of last-mile delivery, such as with collection stations and self-pick-up lockers. Alibaba said Cainiao is always working to lower the cost of delivery, while also improving the experience.

These are worthwhile investments, because if Amazon.com's (NASDAQ: AMZN) Prime two-day delivery guarantee has taught us anything, it's that customer care a lot about how fast their products arrive. If Alibaba wants to keep its spot as the top retailer in China, then it needs to have the most efficient delivery and logistics network.

Keep your eyes on Alibaba

As you can see, Alibaba is in a period of heavy investing. But investors should be encouraged that Alibaba isn't sitting comfortably at the top of the retail market in China. The company is working to grow these four expanding businesses to ensure that it keeps that spot for the next decade.

John Mackey, CEO of Whole Foods Market, an Amazon subsidiary, is a member of The Motley Fool's board of directors. Natalie Walters has no position in any of the stocks mentioned. The Motley Fool owns shares of and recommends Amazon. The Motley Fool has a disclosure policy.