FedEx (FDX -2.22%) recently delivered the kind of results that most investors dread. A guidance cut and talk of slowing global trade are not what investors want to hear from a package delivery company. However, headline-grabbing news is only part of the story, and there are a lot of subplots worth examining. Let's take a closer look at the some of the under-the-radar developments in FedEx's fiscal second quarter. 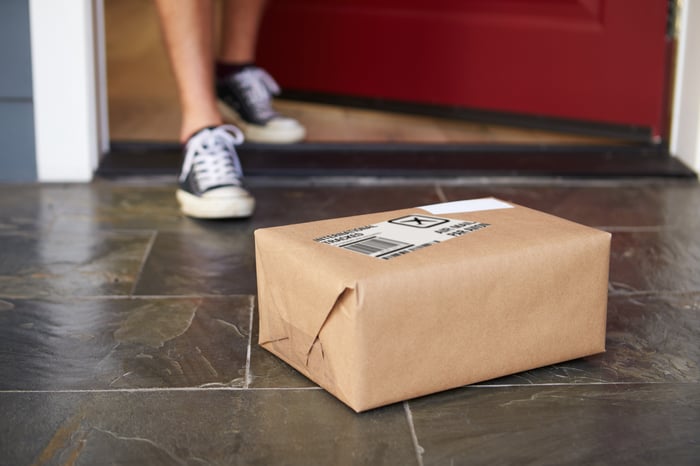 The reason? CFO Alan Graf put it down to "a shift in business conditions and service mix at Express, primarily in Europe." The problems at Express mainly relate to TNT Express, a Europe-based company it acquired in 2016 that's now part of FedEx Express.

Given TNT's European exposure, it's susceptible to any weakness in the region. COO Dave Bronczek also disclosed that the impact of the NotPetya cyberattack in 2017 was still being felt. In a nutshell, the cyber attack reduced revenue in 2017, and while freight and specialty freight came back strongly, TNT has had a harder time recovering express deliveries, which tend to have higher margin. This explains management's reference to a shift in the service mix. Consequently, management backed off its target of improving FedEx Express operating income by $1.2 billion to $1.5 billion from 2017 to 2020.

The news hit the stock hard, and understandably so. There are three things to focus on.

First, management blamed a weakening macroeconomic backdrop, with Chief Marketing and Communications Officer Raj Subramaniam noting that "the peak for global economic growth now appears to be behind us. Eurozone growth has slowed from 2.5% last year to under 2% in the second half of 2018 and economic growth in the UK has slowed sharply since July."

In other words, if the trend continues, end-market conditions for TNT appear set to worsen in 2019.

Second, to put the profit improvement plan at Express (as outlined above) into context, overall adjusted operating income was $5.4 billion in 2017 and $5.7 billion in 2018, so if management is backing off the plan, then analysts are impelled to cut earnings forecasts for 2020 as well.

Third, management's observations on the economy and the lingering impact of the cyber attack are one thing, but it's far from clear that they are the only reasons for TNT's disappointing performance. Indeed, a look back at TNT's trading conditions at the time of the acquisition announcement reveals a company that was already in the throes of a restructuring plan intended to win back customers and improve margin.

In short, the TNT acquisition came with execution risk, and the recent announcement casts doubt on FedEx's plan to improve profitability in the coming years.

Don't worry about the Amazon threat

It seems that UPS (UPS -2.81%) and FedEx management spend a quarter of their earnings calls answering questions from analysts regarding the potential threat from Amazon.com (AMZN 0.19%) and its expanding delivery capability. It's arguably more of a fear than reality as the challenge for UPS and FedEx in recent years has been in improving ground margin and ramping capital expenditures in order to service e-commerce growth rather than issues with volume growth.

That is to say, there's no sign yet that competition from Amazon is holding back growth for FedEx and UPS. Indeed, FedEx Ground package yield and volume growth have both been above 5% for the last six quarters in a row, and UPS has been expanding capacity in order to service growth  -- Amazon's expansion is, for now, not holding back growth prospects at UPS and FedEx.

Moreover, FedEx and UPS have both recently announced a 4.9% price increase for their respective ground operations,  which will go into effect in 2019. This is a sign that both feel they have pricing power -- something that they might not have if the Amazon threat were significant.

Turning back to the question of FedEx Ground margin, as you can see in the chart below, there was a protracted period of decline from 2015-2018, but year-over-year margin has improved in the last three quarters. 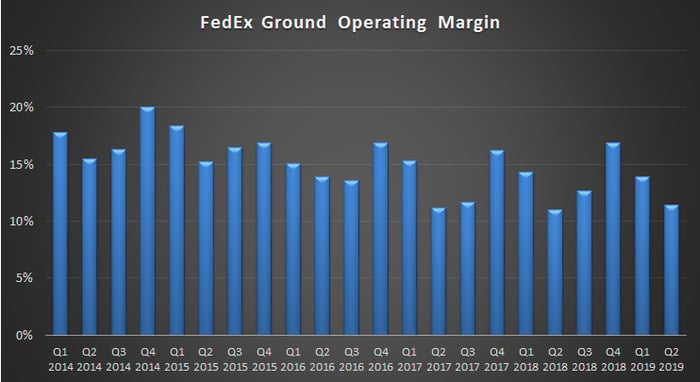 It looks like FedEx may have turned the corner regarding the Ground segment's margin.

All told, FedEx Ground looks set for a relatively better calendar 2019 than the Express segment. The first thing to focus on in the new year is the usual concern over FedEx and UPS trading over peak demand days during the holiday season.

After that, the key to FedEx's 2019 will be in achieving Ground margin expansion alongside ongoing volume growth and getting TNT Express integration plans back on track. At the moment, the first looks like a better bet than the latter.