Stocks greeted the new year on Wednesday by waffling between gains and losses. The Dow Jones Industrial Average (^DJI 0.09%) and the S&P 500 (^GSPC -0.05%) closed nearly flat, but advancing issues on the New York Stock Exchange outnumbered decliners by more than two to one. 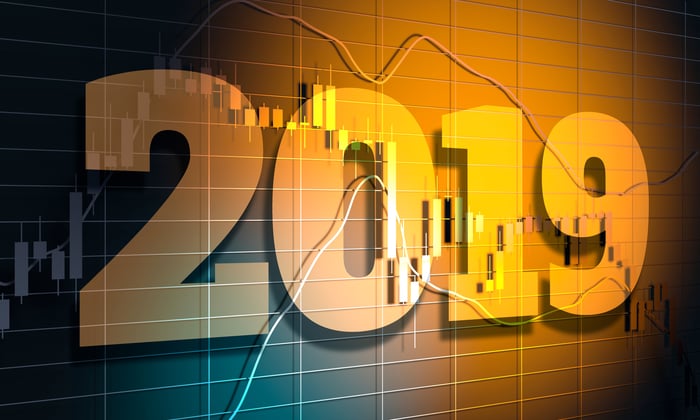 Marijuana stocks generated a lot of buzz and mostly losses for investors in 2018, but they are off to a strong start in 2019. The ETFMG Alternative Harvest ETF (MJ 3.87%) rose 5.9%, helped along by a 7.6% jump in the share price of the Canadian marijuana producer with the largest market capitalization, Canopy Growth.

Last year, investors bid up stocks with connections to the cannabis industry to lofty valuations, only to see share prices tumble late in 2018 despite legalization of adult-use recreational pot in Canada and other big stories for the industry. While concerns about supply constraints, lack of profits, and even allegations of fraud hit some stocks in the space, Canopy Growth was one of a handful of winners, gaining 13.6% on the year.

Canopy scored a big win when it got a $4 billion investment from Constellation Brands, giving some major support to the stock price and loading the company with billions in cash that it can use for increasing capacity, international expansion, and development of new products. With a share price still less than half its peak three months ago, investors took a fresh look at the stock today.

Shares of streaming-media company Roku soared 6.1% after the company announced it will be adding a premium subscription service to The Roku Channel. Beginning at the end of Jannuary, the company plans to roll out subscriptions to over 25 premium services, including Showtime, Starz, and Epix.

The services will be added as options to The Roku Channel, which supplies over 10,000 free, ad-supported movies and television episodes to customers with Roku's streaming devices, smart TVs, and mobile app. Roku touted the convenience of searching across the new services in its channel and bundling subscription fees into a single monthly bill, similar to how Amazon sells premium subscriptions through its Prime platform.

Roku's newly public stock was battered in 2018 despite rapid growth of user accounts and streaming hours. A recent positive nod from an analyst and today's news seem to have reversed the shares' course for now, though.