A war is raging within the confines of America's northern neighbor, Canada. A marijuana war. Canada's decision to legalize recreational marijuana use among adults last year sparked a flood of licensing applications to Health Canada to grow, sell, and perform research on cannabis. At the end of 2018, for example, the agency reported a whopping 132 companies with licenses already in hand to cultivate marijuana and several hundred more applications currently under review.

Legal weed growers, however, aren't just battling against one another for market share. Canada has long had a prolific black market for cannabis, and the country's move to decriminalize weed has so far failed to stamp out underground weed operations. Many provinces even have illegal storefronts that offer a broad spectrum of products, including hundreds of varieties of dried flowers, a cornucopia of edibles, and even bath bombs. While these illegal brick-and-mortar stores were supposed to be phased out ahead of legalization, a number of logistical issues -- along with customer dissatisfaction with legal stores -- has kept them in business. 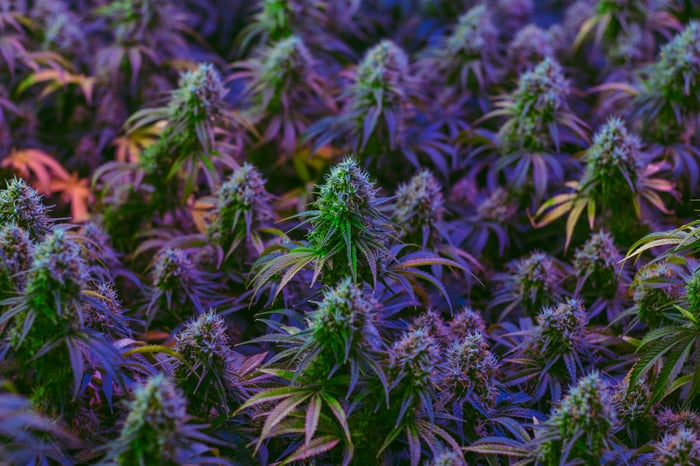 Not only are illicit growers and distributors selling a more diverse range of products at the moment (legal operations are currently restricted to dried flowers, seeds, and oils), black market cannabis products are generally cheaper than legal varieties as well. Canadian cannabis companies operating on the legal side of the industry, therefore, face numerous hurdles when it comes to simply surviving in this exceedingly competitive and highly fragmented environment. In fact, top industry insiders believe there will only be a few select winners among the present crop of legal cannabis entities.

What does this all mean for investors? The brutal truth is that investors interested in this ultra-high-growth industry won't be able to simply pick a name from a hat and expect a rising tide phenomenon to carry them over the goal line. Instead, investors will need to carefully comb over the present cohort of publicly traded marijuana companies in order to identify stocks capable of delivering the goods, so to speak.

Keeping with this theme, the top Canadian pot companies Aurora Cannabis (TSX:ACB) (NASDAQ:ACB) and Tilray (NASDAQ:TLRY) both appear to have the resources necessary to survive the initial growing pains of this nascent industry. However, only one of these companies is well positioned to actually thrive in this highly competitive environment. Read on to fund out more.

Aurora has executed a jaw-dropping 15 acquisitions since the start of 2016. This hyperaggressive growth strategy has put the company on track to become the largest marijuana grower in Canada within the next few years and it has given the company a strong foothold in key emerging markets like Europe and Latin American.

As things stand now, Aurora has enough production capacity to supply an astronomical 87.5% of Canada's legal cannabis market, showing that the company can easily service both its domestic market, as well as its ongoing international expansion.

However, Aurora's growth-by-acquisition approach to business development hasn't been kind to shareholders. Given the difficulty of obtaining nondilutive funding sources such as bank loans, Aurora -- like most of its peers -- has been forced to fund these acquisitions largely by issuing new shares.

The silver lining is that Aurora's strong portfolio of branded cannabis products -- resulting from buyouts such as MedReleaf -- should both reduce the need for further acquisitions and shareholder dilution. Aurora's sales, after all, are projected to reach a healthy $589 million (at current exchange rates) by 2020. That sales estimate should be more than enough to make Aurora a highly profitable company -- something that can't be said for many of its peers.

Tilray's business strategy is markedly different from Aurora's. Instead of bulking up to overpower its competitors, Tilray is attempting to build trust among its shareholder base and customers alike. That may sound odd at first, but investors need to remember that the cannabis industry has a problematic history with charlatans.

To achieve this goal, Tilray has formed a $100 million joint venture with alcohol giant Anheuser-Busch InBev to research cannabis-infused drinks, a medical marijuana collaboration with Novartis' Sandoz, and named 10 high-powered individuals to its international advisory board last December. In short, Tilray has proven that it is anything but a "fly by-night" operation through these impressive moves.

At the end of the day, though, Tilray still needs to turn a profit and that's where the company runs into trouble. Although the company is projected to generate $134 million in sales this year, that amount won't be enough to transform Tilray into a cash flow positive operation. And because Tilray remains squarely in the "building out" phase of its development, it is unlikely to turn a profit anytime soon.

Complicating matters further, Tilray's 180-day lockup period from its initial public offering (IPO) last year ends on Jan. 15. Once this lockup period expires, insiders and large shareholders alike could be tempted to take profits. The company's stock, after all, has gained a stunning 214% since its IPO, resulting in a sky-high valuation that is wildly detached from Tilray's underlying fundamentals.

In this head-to-head comparison, Aurora's stock arguably comes across as the more attractive buy right now. Even though Aurora's management hasn't been shy about diluting shareholders, the company has built out a world-class operation over the past two years. So, Aurora now has a clear path toward becoming a top dog of the industry.

Tilray, on the other hand, still has a lot of work to do to break away from the pack. The company has yet to land a seminal partnering deal that includes a sizable up-front cash payment. In the same breath, Tilray also hasn't acquired a truly marquee property within the cannabis space, whereas Aurora has racked up a number of wins on this front. Lastly, Tilray's stock could come under heavy downward pressure this year with the forthcoming end of its 180-day lockup period.