That's the headline of Canaccord Genuity's new Alphabet upgrade today -- or it would be, if you're a Google bear at least.

Alphabet's revenue is still going to grow, however, and the threat from Amazon.com's ( AMZN -1.38% ) rising advertising business is smaller than you think. That's the headline if you're a Google bull. 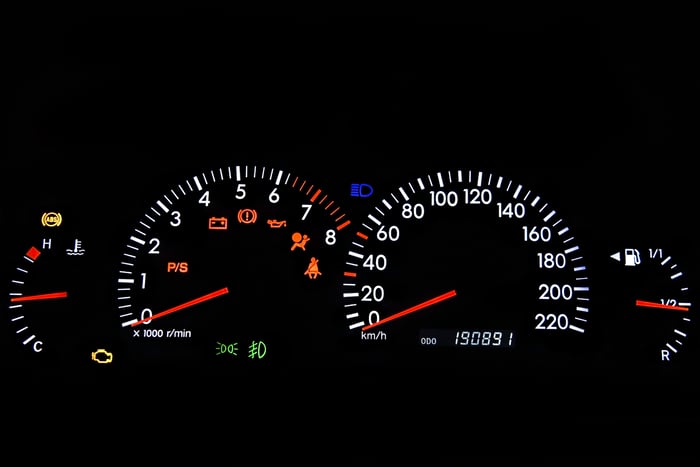 Is Google's growth due for a slowdown? Image source: Getty Images.

Early this morning, Canaccord Genuity announced it's upgrading Alphabet stock, the parent company of Google, from hold to buy and assigning the shares a $1,250 target price -- 10% more than Canaccord previously thought the shares were worth. The response from investors, however, probably isn't what the analyst had anticipated.

Google stock is down more than 1.1% on the news.

Why this perverse reaction to what is, at its heart, an optimistic upgrade for Google? Well, consider how Canaccord starts out its recommendation.

Alphabet's sales were up 24% year over year through the first three quarters of 2018, according to data from S&P Global Market Intelligence. But Alphabet is currently on a "glide path for revenue growth deceleration from ~20% to ~15% by 2021," StreetInsider.com (subscription required) reports Canaccord saying. Furthermore, gross margin "pressure" can be expected to "persist." There's also a competitive risk from Amazon's growing advertising business, where ad sales grew 144.5% year over year last year, and are projected to reach $22 billion by 2022.

Right. The fact remains: This is an upgrade of Alphabet stock. Qualifying the bad news and explaining why it's not as bad as it seems, Canaccord notes that even if revenue will be growing a bit slower for Google over the next few years, it will still be growing -- and at strong, double-digit rates.

This is because "revenue drivers like marketing spend shift and YouTube" will help to offset weaknesses in Alphabet's business. Speaking of which, Canaccord agrees that Amazon's advertising business is growing quickly. (You've probably noticed, for example, that every Amazon search you do these days generates a whole row of sponsored products, before you ever see "Amazon's Choice.") And yet, Amazon and Google don't compete everywhere, and not all of Amazon's gains are Google's pain.

In fact, according to Canaccord, only "~1% of Google's search revenue is vulnerable" to competition from Amazon. Given that Google's search and advertising business recorded revenue of nearly $110 billion last year, that seems a manageable risk. Simply put, Amazon may blunt Alphabet's revenue growth rate a bit -- but it can't prevent Google from growing sales.

Moreover, Alphabet's per-share earnings should continue to grow nicely through a combination of "modest operating leverage and share buybacks," permitting earnings to grow faster than revenue "in 2020 and after." (Indeed, reviewing the same upgrade that StreetInsider.com looked at, TheFly.com says that Canaccord is projecting "over 15% earnings growth between 2020-2022.")

This projection, by the way, tallies nicely with overall consensus analyst predictions for 17% compound annual earnings growth at Alphabet over the next five years. But here's the thing investors really need to focus on:

Granted, Alphabet also has quite a bit of cash in the bank -- $102.4 billion net of debt. Subtract that to get a debt-adjusted market cap, or enterprise value, of $628 billion, and I still see Alphabet stock trading for more than 33 times earnings, and 27.5 times free cash flow.

As an Alphabet shareholder myself, I have to admit: I find those valuations more than a bit disconcerting if all the company is going to be able to manage over the next few years is mere midteens revenue and earnings growth. I'd be much more comfortable owning Alphabet at these prices if the growth rate was closer to the mid-to-upper 20s -- such as it was last year.

This disconnect between valuation and growth rates doesn't seem to worry Canaccord Genuity, but given how severely investors have been punishing stocks that didn't grow fast enough lately...maybe it should.