For Nike (NYSE:NKE), the run-up to the holiday season was a strong period for sales. Nike's total revenue in its fiscal second quarter grew 14% on a currency-neutral basis -- a significant improvement over the single-digit growth in previous quarters. Earnings were weighed down somewhat by higher investments to fuel growth, as well as a higher tax rate. However, a higher gross margin and share repurchases offset those higher costs, allowing earnings per share to grow 13% year over year.

Below are four quotes from Nike's conference call that highlight key initiatives that drove the strong results in the fiscal second quarter, as well as where management is finding future growth opportunities. 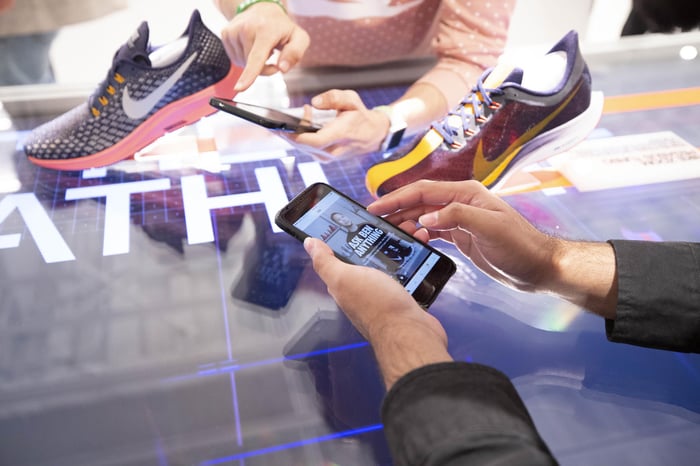 Leading the way once again in Q2 is Nike Digital. Our Nike Digital ecosystem continues to grow faster than all other channels, growing 41% on a currency neutral basis. -- CFO Andy Campion

Retailers that maintain a close connection with customers through digital channels are in an advantageous position right now. For example, lululemon athletica experienced robust growth this year after revamping its website and ramping up its digital-marketing strategies. It appears Nike has started to enjoy a boost from its digital efforts, as well.

Through its apps and Nike+ memberships, Nike has been effective at locking in loyal customers and turning those customers into repeat purchasers. More than 50% of Nike's digital commerce is derived from mobile.

Also, Nike has expanded on core products with new variations in style and color, which seems to be driving greater demand. The pace of innovation has been impressive lately, with several new styles releasing through December.

The momentum we're driving is grounded in strong product innovation. We're increasing the pace of new concepts and bringing a new discipline to how we manage the lifecycle of our innovation. -- CEO Mark Parker

Nike has been releasing new styles at a blistering pace lately, which is part of management's long-term strategy to double down on innovation, speed to market, and digital sales channels.

During the call, Parker pointed out the Nike Air platform as an example of the success they are having with innovation. "As a platform, it's a several billion-dollar business and growing," Parker said during the company's investor day presentation in 2017. "In fact, if Air was a stand-alone athletic company, it would be the third-largest in the world."

A year ago, Parker said that "Air is connecting deeply with consumers." During the call, Parker highlighted the Air Max 95, the Max 97, and the upcoming Air Max 720 as receiving high consumer interest.

Nike is benefiting from the trend of people wearing running and basketball shoes as much for fashion as for performance. This is very evident with the Jordan Brand, an approximately $3 billion annual business, which includes sales of retro versions of every Air Jordan ever made going back to the original Air Jordan basketball shoe released in 1985.

The growth in the Jordan Brand serves as a microcosm of what drove Nike's results in the quarter. The Jordan brand experienced broad growth across footwear and apparel. Management highlighted the new Air Jordan 33 and the Max Aura's performance in China as driving strong growth within the segment.

Nike has had tremendous success in releasing variations of the classic Air Jordan 1, which Parker said is "more coveted than ever." Parker added, "At the start of [the fiscal second quarter], our team executed an incredible effort with the most successful Nike sneaker launch ever with the Jordan 11 Concord." The $220 Jordan 11 Concord sold out within minutes of going on sale on the company's website in early December. 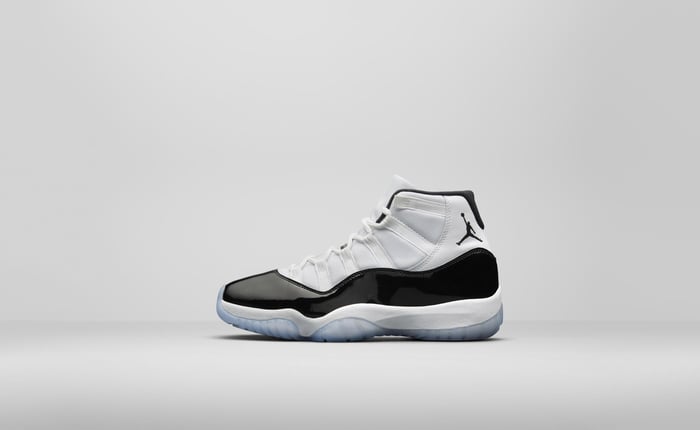 In Sportswear, our biggest category, apparel grew over 20% this quarter. Sportswear Fleece and women's apparel were up double digits. In Sportswear, we're anchoring our communications around head-to-toe collections, which makes it easier for consumers to shop the complete look and strengthens our presentation and storytelling. -- Parker

Parker called apparel "one of Nike's greatest growth opportunities." The trend of blending sportswear with everyday wear continues to gain traction. Other retailers see opportunity, as well, as athletic-wear assortments have grown in recent years among non-traditional athletic-apparel stores.

Specifically, management sees "incredible momentum" within the women's category. Women's apparel makes up less than a quarter of Nike's total revenue, yet as CFO Andy Campion pointed out, "the women's footwear and apparel markets are larger than men's."

However, there's still opportunity in the men's category. Nike is launching a new yoga collection for men, the first time Nike has done this.

All around, it was a solid quarter from the swoosh brand. Management offered investors a healthy outlook in the near term, which is consistent with the long-term target of high-single-digit revenue growth over the next five years. For now, it seems Nike's plan to fight back against rival Adidas with innovation and speed is working.